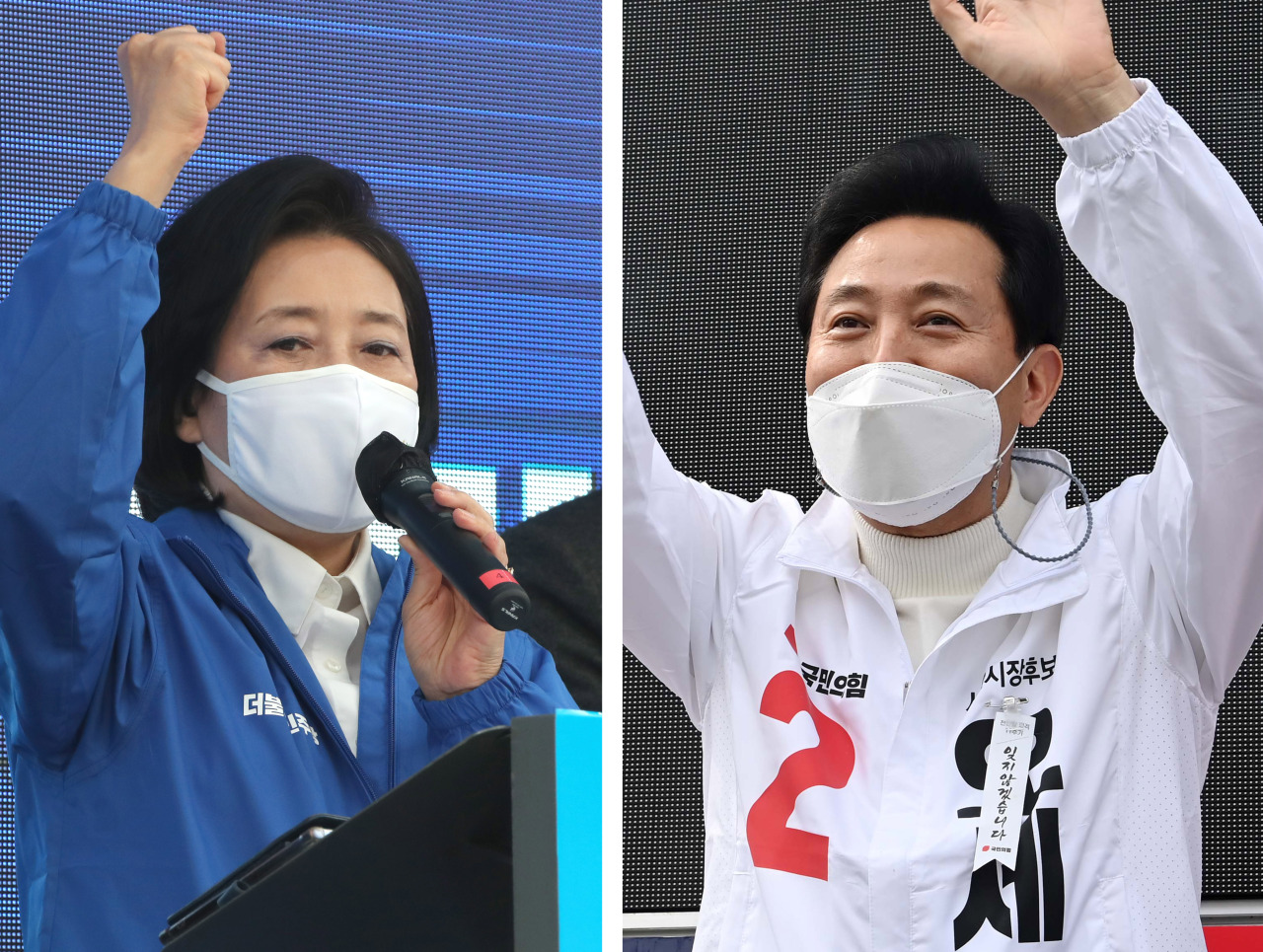 Park Young-sun (left) of the Democratic Party of Korea appeals for support in a campaign held in front of Hyundai Department Store in Sinchon, while Oh Se-hoon of the People Power Party campaigns in Yongsan on Friday. (Yonhap)
With the April 7 by-election to choose Seoul’s next mayor just around the corner, the election campaigns are becoming marred by mudslinging and personal insults between candidates, which may lead to political distrust and apathy among voters.

About a week to go before the election, both the ruling and opposition parties appear to be focusing more on raising personal negative issues about rival candidates than discussion of policies and pledges.

The ruling Democratic Party is taking issue with the suspicion of Oh’s land survey and preferential compensation for his property in Naegok-dong in southern Seoul.

According to reports by the state-run Korean Broadcasting System, Oh and his wife were compensated 3.65 billion won ($3.22 million) in November 2009 when his land in Naegok-dong was designated as a residential area. Although Oh said he was not aware of the land and related development details, the media reported he was found to have measured the land in June 2005, right before former Mayor Lee Myung-bak implemented the land development.

Kim Tae-nyeon, an acting representative and floor leader of the Democratic Party, demanded on Sunday that Oh resign as a candidate for Seoul mayor “as his lies were revealed.”

Oh in turn accused the party’s official Chun Joon-ho, who raised the suspicions, of publishing false information. The Democratic Party also responded with a counter accusation.

The People Power Party similarly criticized Park’s spouse’s possession of an apartment unit in Tokyo. The spouse bought the unit in 2010 when he started to work in Japan, rented it out for eight years and sold the unit in February this year.

He added, “Park is a true native Japanese candidate. For candidate Park, the Tokyo mayor, not the Seoul mayor, will suit her more.”

The fierce battle between the ruling and opposition parties has even led to verbal abuse.

Rep. Yoon Ho-joong of the Democratic Party said on Saturday during a campaign to support Park, “Oh is a candidate who lies even knowing clearly that there is land in Naegok-dong. (He is) trash,” adding, “Garbage should be well collected and separated on April 7.”

In 2019, Oh labeled President Moon Jae-in as a “severe dementia patient” and “dictator” at a meeting hosted by the Rev. Jeon Kwang-hoon. As the ruling party raised issue with his remark recently, Oh replied, “Isn’t it possible for the opposition party to say that?”

In and out of politics, criticism is rising that the negative battle has overheated to the extent of overshadowing policy debate.

Lee Jun-han, a political science professor at Incheon National University, said, “Candidates slandering or stabbing each other can amplify voters’ distrust of politics, hatred of politicians and dissatisfaction with elections.”

“Even if they win the election, the attacks will eventually become boomerangs and will lead to distrust,” he added.

As negative campaigns overheat, hate and cynicism may grow for voters who are less interested in politics, and many will not vote, experts say.

“If the election becomes a mud fight, centrists and young people in their 20s and 30s tend not to come to the polls,” said Um Kyung-young, head of private research center Zeitgeist Institute.

The 2007 presidential election, which was considered to have the most heated negative campaign, had the lowest 65 percent voter turnout.