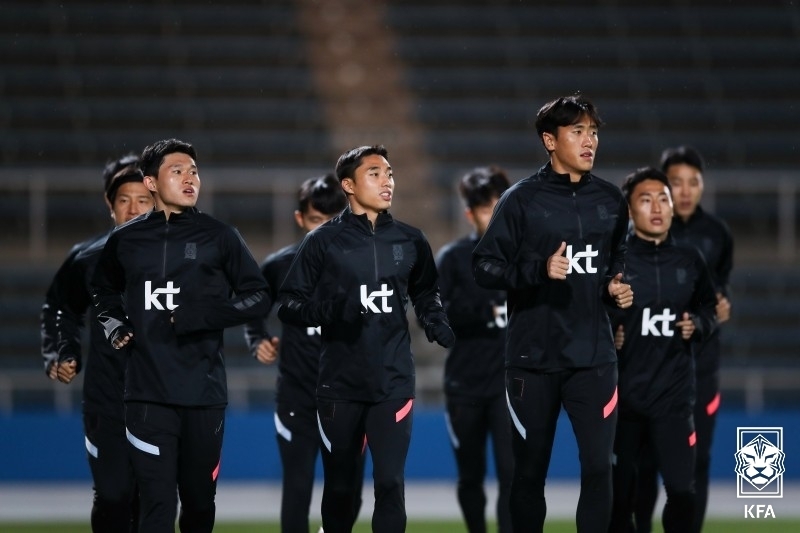 Members of the South Korean men's national football team train at a facility in Yokohama, Japan, on Monday, in preparation for a friendly match against Japan, in this photo provided by the Korea Football Association. (Yonhap)
On the eve of his team's football friendly match against Japan, South Korean defender Kim Young-gwon said Wednesday he'll keep a close eye on the opposition's passing game.

The two longtime rivals will square off at 7:20 p.m. Thursday at Nissan Stadium in Yokohama, south of Tokyo. It's their first meeting since December 2019, and 80th head-to-head match overall.

In an interview clip provided by the Korea Football Association (KFA) Wednesday, Kim reflected on what he learned from facing Japan on four previous occasions.

"Their attack is built on precise passing and strong combination plays," the 31-year-old defender said. "They tend to play off each other very well, and they pay attention to small details."

Kim is familiar with the Japanese style of play, having competed for the J1 League club Gamba Osaka since 2019. He said it will be "fun" to play for his country at a stadium he's familiar with and to be up against some of his J1 League opponents in the international setting.

Asked to pick a Japanese player to keep an eye on, Kim went with a Europe-based star: Southampton midfielder Takumi Minamino.

"He does so much work in midfield, and he jumps in on the attack too," Kim said of the 26-year-old with 12 goals in 26 matches for Japan. "He knows how to score."

Kim said the significance of the rival match against Japan is never lost on the Korean team and added, "We always play with a lot of drive and determination, and it's going to take much of the same to beat Japan this time." (Yonhap)