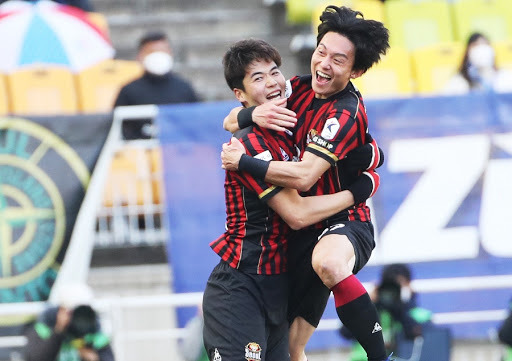 Ki Sung-yueng of FC Seoul (L) embraces teammate Ko Kwang-min after scoring a goal against Suwon Samsung Bluewings during the clubs' K League 1 match at Suwon World Cup Stadium in Suwon, 45 kilometers south of Seoul. (Yonhap)
FC Seoul captain Ki Sung-yueng has never been a goal scorer. The 32-year-old midfielder has built his career on setting up forwards with long passes and relying on his on-field vision to play solid two-way game.

And yet, here is Ki, having scored in three straight matches for his K League 1 club. Ki's equalizer late in the first half helped pave the way for FC Seoul's 2-1 victory over Suwon Samsung Bluewings on Sunday in the season's first "Super Match" derby.

Ki has three goals overall in six matches this year, one off the league lead and just one shy of matching his K League career high set in 2008. He spent a decade in Europe, starting in 2010, before returning to the K League last year, and never once reached double figures in goals. His club career best is eight while with Swansea City in the Premier League in 2014-2015.

"People seem to think I am only good at passing the ball from the back, but I also enjoy jumping in on the attack and setting up my teammates in the offensive zone," Ki said. "I'd like to score at least five goals this year. It will mean so much to me to surpass my career high of eight goals."

FC Seoul will take whatever offense that Ki can provide. Ki's goal scoring run has coincided with FC Seoul's three-match winning streak, and they are now alone in second place with 12 points from four wins and two losses.

Jeonbuk Hyundai Motors stayed at the top with 14 points, following a 1-1 draw with Suwon FC on Saturday.

After the weekend's action, Suwon FC remained the only winless club this season. They just earned a promotion from the second-tier K League 2 and appear to be in early danger of going right back down. The last-place club in the K League 1 gets automatically relegated for the following season.

Daegu FC and Gangwon FC each picked up their first win on Sunday.

Daegu got theirs in a more dramatic fashion, as Cesinha scored the go-ahead goal in injury time for a 2-1 victory over Ulsan Hyundai FC.

Ulsan lost for the first time in 2021. They have an identical record with Suwon Samsung Bluewings and Seongnam FC -- who edged out Pohang Steelers 2-1 Sunday -- at three wins, two draws and one loss. Ulsan remain ahead of the other two to sit in third place for now by virtue of having more goals, 11 to Suwon's seven and Seongnam's five.

Jeonbuk blew a late lead to settle for a 1-1 draw with Suwon but stayed undefeated for the year at four wins and two draws.

Following Ulsan's loss to Daegu, only one other club maintained an undefeated record: Jeju United with one win and five draws.

They had a 1-1 draw with Gwangju FC on Saturday. It was Jeju's third straight draw. They have yet to score or concede more than one goal in any of the six matches so far.

Teams have now completed a jampacked schedule in March, playing their last four matches in a 13-day stretch beginning on March 9. The league will on a hiatus until April 1.