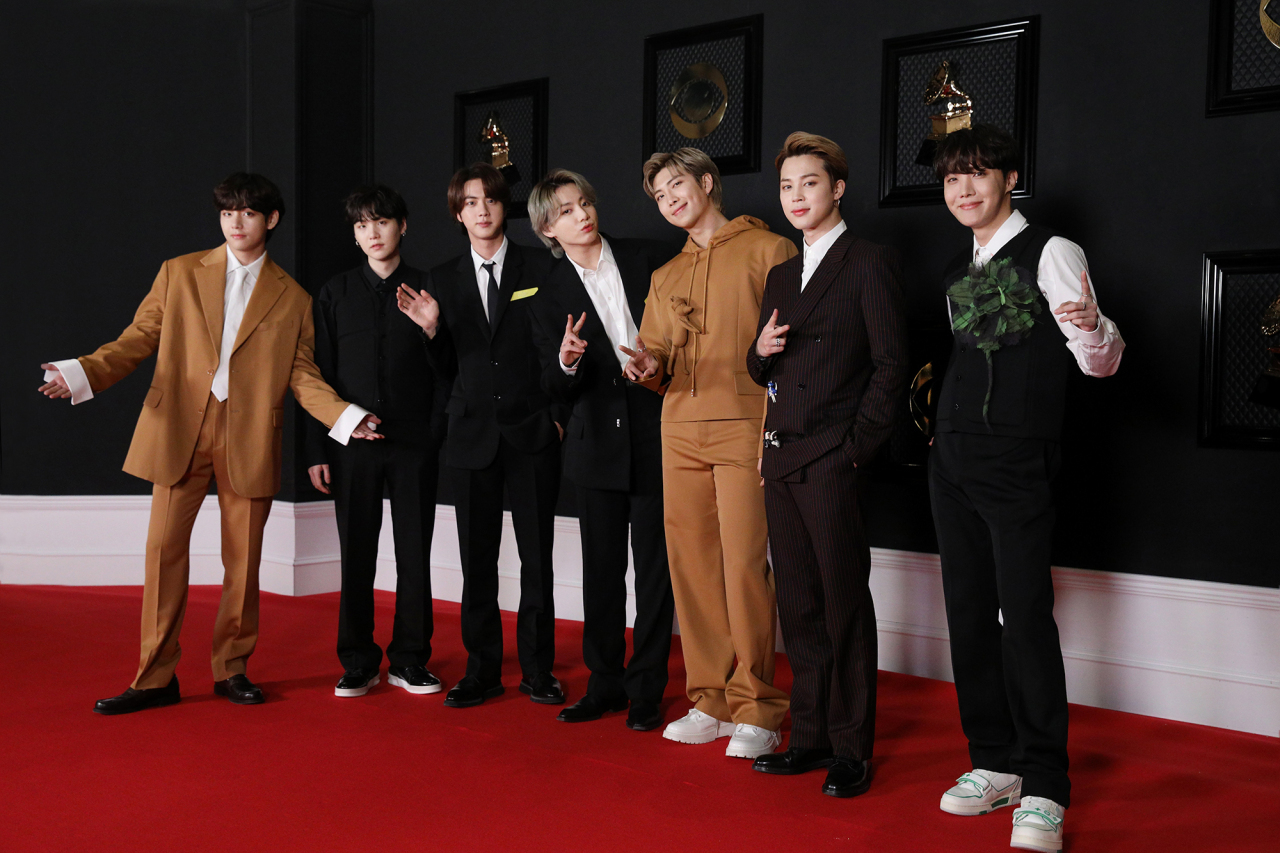 The members of BTS pose for a picture on the red carpet at the 63rd Grammy Awards in Los Angeles on Monday. (Big Hit Entertainment)

1. Even without a Grammy, BTS goes on

[1] South Korean boy band BTS left the Grammys without an award in hand on Sunday, Los Angeles time, but still the journey goes on.

[2] BTS was nominated in the Best Pop Duo/Group Performance category at the 63rd Grammy Awards for its megahit single “Dynamite.” This year’s ceremony took place at the Los Angeles Convention Center without a live audience.

[3] The group vied against four other nominees, and “Rain on Me” by Lady Gaga and Ariana Grande grabbed the final prize. The song is from Lady Gaga’s sixth studio album, “Chromatica,” released last May, and was the first collaborative work by female artists to debut atop the Billboard Hot 100 singles chart.

[5] BTS is the first K-pop act ever to be nominated for a Grammy. The band is also the first Asian act to be shortlisted in the Best Pop Duo/Group Performance category, which was established in 2012.


2. Investigation launched after Jeju Air flies with a damaged winglet

[1] Low cost carrier Jeju Air is under investigation by the Transport Ministry after it was found to have flown one of its planes with a damaged winglet last week.

[2] The airline’s 7C264 flight, which left Gimpo Airport on Wednesday morning, attempted landing on the runway at Gimhae International Airport in the afternoon. During the landing, the plane tilted to one side and the plane appears to have damaged its winglet during its second attempt at landing, sources close to the matter said on Monday.

After the turbulent landing, the airline failed to discover the damage to the winglet and the plane, carrying passengers, took off again and headed to Gimpo Airport.

[3] Winglets, are features at the end of wings that are designed to reduce the aircraft’s vortex drag and inhibit turbulence.

[4] “Jeju Air had a similar accident on March 8, which means it flew without being aware of damage to its plane for the second time in a row and we are taking this matter seriously,” said one official at the Ministry of Land, Infrastructure and Transport.