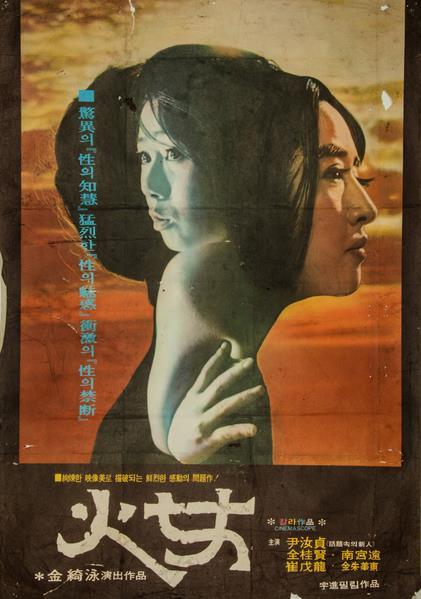 A poster of the film "Fire Woman," directed by auteur Kim Ki-young, in 1971. (Yonhap)
Youn Yuh-jung has a career that spans over half a century, with a number of hit films and TV series under her belt.

At the age of 73, the veteran actress has made South Korean film history by being nominated for best supporting actress at the 93rd Academy Awards for her performance in the US immigration film "Minari." No other Korean actor, even stars from the Oscar-winning "Parasite," has received an Oscar nomination.

Born in 1947, Youn rose to fame in South Korea with her maiden silver screen project "Fire Woman," directed by legendary auteur by Kim Ki-young, in 1971.

The movie brought her best actress prizes from South Korea's big film awards and paved the way for her to become a bankable actress in the early 1970s. She was also cast in Kim's next psychosexual drama "Insect Woman" the following year.

But she left the entertainment scene in the mid-1970s, when she was enjoying her career heyday, after marrying popular singer Cho Young-nam and moving to the United States.

After her divorce with Cho, however, she returned to the screen in the late 1980s and did whatever she could due to the negative public gaze against divorced women in the country.

Nevertheless, she has received calls from many renowned filmmakers like E J-young, who has made films like "Actresses"

She has played roles ranging from a young housemaid who seduces a landlord in her debut "Fire Woman" and an insatiable mistress of a wealthy family in "The Taste of Money" to an eccentric livewire grandmother who doesn't cook and bake but loves watching wrestling and playing cards in "Minari."

But her effortless and candid acting has not relatively stood out among actors armed with flattering and sugary tones. Instead, she has created her own characters that blend well into narratives.

"When I first started my acting career, I thought many actors overacted to some extent. I didn't like it," she said in a recent online conversation with "Parasite" director Bong Joon-ho. "So I've tried to do everything naturally and spontaneously. Maybe that is why I've been rarely in the spotlight throughout my career." (Yonhap)

In recent years, the go-getting actress has not minded taking supporting roles or even smaller ones in low-budget projects made by people who she is fond of and based on well-written scenarios.

She played an illiterate grandmother in the indie romantic drama "Lucky Chan-sil" (2019) without being paid and a dementia-suffering mother in the crime thriller "Beasts Clawing at Straws" (2020), the directorial debut of Kim Yong-hoon.

The screenplay of "Minari," written by Korean American director Lee Isaac Chung based on his childhood memories, appealed to Youn, and she didn't hesitate to fly to the United States for a five-week shoot in Oklahoma in the middle of July.

She said she loved Chung's story that features inner struggles and hardships that a family has to endure on its way to eke out a living in a new world and fulfill their dream.

The choice helped her become the first South Korean and the fourth Asian actress to get a nod in the acting category from the Oscars.

But she isn't flattered by the unprecedented, history-making outcome, standing shoulder-to-shoulder with Hollywood actresses, but returns to where she was, in front of the camera.

She is now working on "Pachinko," a TV series adaptation of the bestselling novel with the same name by Korean American author Lee Min-jin, to be released on Apple TV+.

"Youn's Stay," a popular reality series in which she and other Korean celebrities run a pop-up guesthouse for foreigners, is now showing on TV.

She said this is the "extravagant" time of her life.

"Since I turned 65, I decided to be extravagant. I just wanted to work with people I like and people who want me, regardless of money or fame," she said in a press conference last year. "I thought it would be good if I died after doing what I really love." (Yonhap)