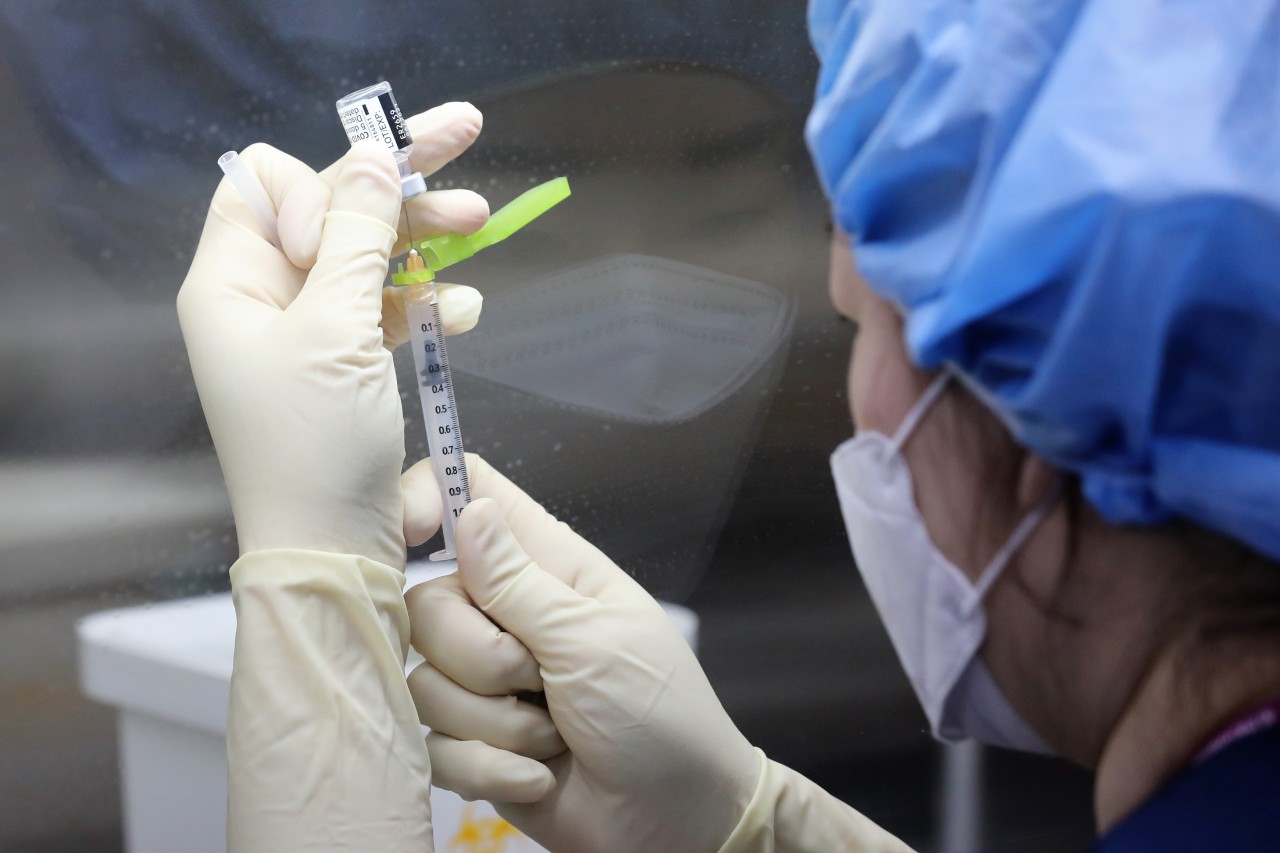 A health worker prepares a Pfizer COVID-19 vaccine at a hospital in central Seoul on Saturday. (Yonhap)

South Korea's daily new coronavirus cases stayed below 400 for the second straight day Monday, but health authorities remained alert over a continued rise in cluster infections ahead of the start of the spring school semester.

The tally was lower than the 356 recorded Sunday and 415 on Saturday.

The fall in new cases largely appeared to be due to fewer tests over the weekend. The country added two more deaths, raising the total to 1,605

New virus cases somewhat slowed compared with the third wave of the pandemic peaking at a record high of 1,241 on Dec. 25.

But a continued rise in cluster infections at workplaces, hospitals and risk-prone facilities has posed challenges to the country's antivirus efforts amid concerns about the spread of more contagious COVID-19 variants.

The country has decided to extend the current social distancing rules for another two weeks through March 14 with a new school semester starting this week.

The greater Seoul area, home to about half of the nation's 52 million population, is under Level 2, the third highest in its five-tier system, and other regions are placed under Level 1.5. Private gatherings of five or more people are banned.

"Face-to-face contacts have increased amid relaxed virus curbs, and there is risk of cluster infections spreading with the start of the new semester in March," KDCA chief Jeong Eun-kyeong said during a daily briefing.

Of the locally transmitted cases, 92 additional cases were reported in Seoul and 156 in Gyeonggi Province that surrounds the capital. Incheon, 40 kilometers west of Seoul, identified 14 new cases.

Cases tied to a private meeting in eastern Seoul came to 16, up 15 cases from the previous day.

Infections traced to a senior care hospital, northwest of Seoul, added 11 cases to increase the total to 12. A fitness center in Jeonju, 194 km southwest of Seoul, reached 49, up nine from a day earlier.

South Korea began its COVID-19 vaccination campaign Friday by administering the vaccine developed by AstraZeneca to health workers and patients aged under 65 at nursing homes and hospitals.

It also started Saturday to give the first shot of the Pfizer vaccine to front-line medical workers.

The country administered 765 vaccine shots Sunday, raising the total to 21,177, according to the KDCA. It aims to achieve herd immunity by November.

Health authorities said a total of 152 mild symptoms after the vaccinations, such as fever and muscle pain, have been reported since Friday.

The country, meanwhile, added 17 imported cases, increasing the total to 7,063. Three cases came from Pakistan, followed by two each from Indonesia, Japan, the United States and Morocco.

The number of seriously or critically ill COVID-19 patients was 131, down from 135 in the previous day.

The positivity rate, the portion of newly infected people against the daily number of people receiving tests, came to 2.12 percent, up from 1.63 percent a day earlier.

The total number of people released from quarantine after making full recoveries stood at 81,070, up 373 from a day earlier. (Yonhap)