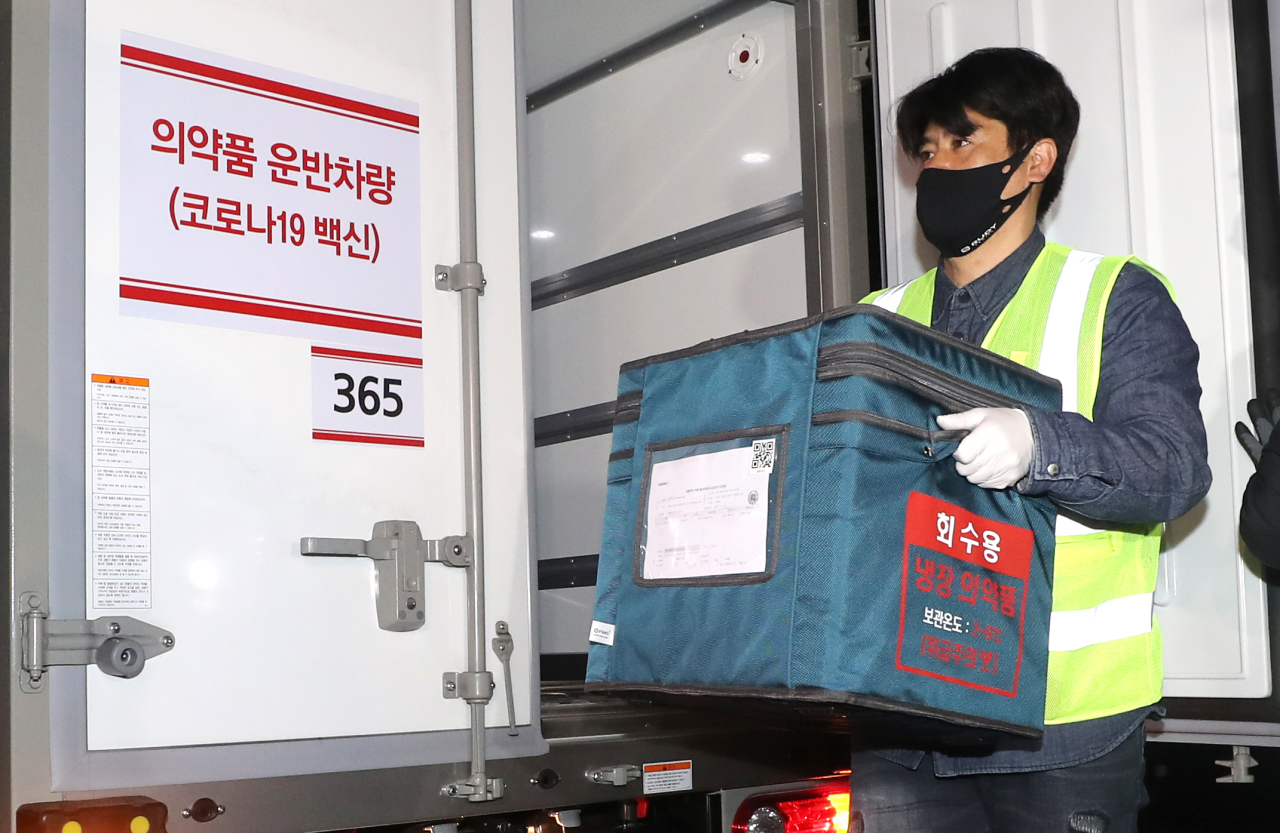 A worker carries a box containing COVID-19 vaccines on the southern resort island of Jeju on Thursday. (Yonhap)
South Korea's daily new coronavirus cases fell slightly below 400 on Thursday, a day ahead of the country's first rollout of COVID-19 vaccines, as sporadic cluster infections continued to pop up across the country.

The country reported 396 more virus cases, including 369 local infections, raising the total caseload to 88,516, according to the Korea Disease Control and Prevention Agency (KDCA).

Thursday's daily caseload marks a slight drop from 440 tallied the previous day. The figures hovered above 600 last week before falling below 500 over the weekend and under 400 earlier this week on fewer tests.

The country added five more deaths, raising the total to 1,581. The fatality rate was 1.79 percent.

The country's first vaccine program will start on Friday with AstraZeneca's vaccine for 785,000 medical workers and those who under the age of 65 at nursing homes. The vaccines were manufactured locally by South Korean drugmaker SK Bioscience Co. under a partnership deal.

Thousands of health care workers and patients at nursing facilities and hospitals across the nation will be vaccinated first.

Starting Saturday, Pfizer's vaccines will be administered to medical workers at hospitals for virus patients. The first batch of the Pfizer vaccine will be provided to 300 workers at the National Medical Center in Seoul.

The country also plans to issue digital certificates to vaccinated people to prevent them from being forged. Authorities plan to allow holders to be exempted from self-quarantine even when they have had close contacts with patients.

Despite the vaccine program, South Korea may opt to extend its current social distancing guidelines, the third highest in the five-tier virus curbs.

The greater Seoul area, home to around half of the nation's 52-million population, currently is under Level 2 distancing, which is a notch lower than the previous Level 2.5.

Under the new guidelines, set to run through Sunday, restaurants and bars in Seoul and the surrounding Gyeonggi Province are allowed to remain open for an hour longer until 10 p.m.

Bans on gatherings of five or more people, however, are in place nationwide. Health authorities are set to decide whether to extend or lower the current measures.

But the current virus situation is not improving given asymptomatic patients who could have spread the virus over the Lunar New Year's holiday, which ran from Feb. 11 to 13, and the spread of more contagious COVID-19 variants.

On Thursday, authorities said they have found 142 cases of COVID-19 variants so far, with those from Britain taking up 122.

South Korea, meanwhile, also plans to announce an outline on how to revamp the current five-tier social distancing scheme next week and gather the public's opinion before a full implementation.

The revised guideline is said to include streamlining the five-tier alert system into three tiers, along with minimizing restrictions on shops.

Of the 369 locally transmitted cases, 114 cases were reported in Seoul and 132 in the surrounding Gyeonggi Province. Incheon, which lies west of the capital city, added 22 more cases.

The southern resort island of Jeju had five new patients.

A plastic factory in Namyangju, north of Seoul, added three more patients, raising the caseload to 187.

A religious group from Bucheon, west of Seoul, also identified 13 more patients, with the total reaching 174.

Over the past two weeks, cluster infections took up 30 percent of the newly added cases, while infection routes of 21.7 percent remained unknown.

The country also reported 27 more imported cases, raising the number of such cases to 6,990.

The United States accounted for six, and the Philippines took up five. Patients from the United Arab Emirates also came to three.

The number of seriously or critically ill COVID-19 patients was 144, up four from the previous day.

The total number of people released from quarantine after making full recoveries was 79,487, up 437 from a day earlier. Around 89.8 percent of the patients reported here were cured.