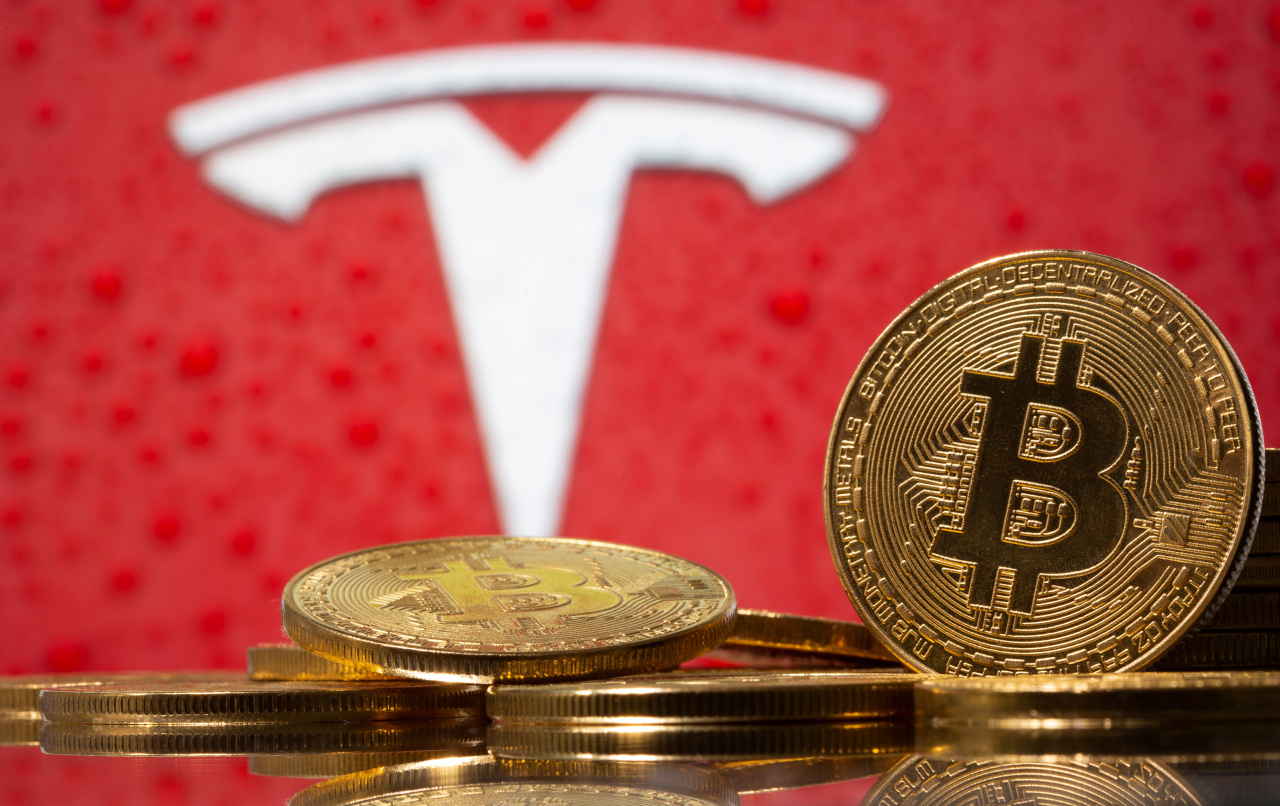 Representations of virtual currency Bitcoin are seen in front of Tesla logo in this illustration taken, February 9, 2021. (Reuters-Yonhap)
Bitcoin prices continued to fluctuate on Wednesday as authorities in and out of the country expressed concerns over the digital coin’s volatility.

After plunging 22 percent from Sunday’s record high of 65.84 million won ($59,294) to 50.9 million won on Tuesday, bitcoin prices stabilized at about 56 million won in the afternoon on Wednesday, Upbit data showed.

The recent surge was driven by endorsements from Silicon Valley and Wall Street. Tesla, a US electric vehicle maker, said on Feb. 8 that the company had purchased $1.5 billion worth of Bitcoin in January. Broader acceptance from financial institutions like MasterCard, Bank of New York Mellon and BlackRock also pushed the price further.

However, the upward move was put on hold this week as economic authorities and business people, even Tesla CEO Elon Musk, showed skepticism.

Musk on Saturday said in his tweet that the prices of Bitcoin and Ethereum seemed high while Bill Gates said that average investors should watch out for Bitcoin during an interview with Bloomberg on Tuesday.

Janet Yellen, the US Treasury Secretary also expressed skeptical views on cryptocurrencies, on Monday during The New York Times Dealbook conference. “It is a highly speculative asset, and I think people should beware. It can be extremely volatile, and I do worry about potential losses that investors in it could suffer,” Yellen said.

Bank’s of Korea governor Lee Ju-yeol on Tuesday told the parliament that there is no intrinsic value in crypto assets. He said cryptocurrency prices will be extremely volatile when asked by lawmakers if the recent surge is temporary.

South Korean financial authorities are moving to tighten grips on cryptocurrency trading in many fronts, with a new law governing digital assets set to go effect on March 25.

Starting next year, crypto exchanges will be placed under tight scrutiny by the financial watchdog. The Financial Intelligence Unit under the Financial Services Commission, has been scanning suspicious activities in the crypto market only through banks. But the unit will be able to directly monitor cryptocurrency exchanges to detect money laundry under the revised law on reporting and use of financial transaction information.

Also, investors who made more than 2.5 million won will have to pay a 20 percent income tax from 2020.