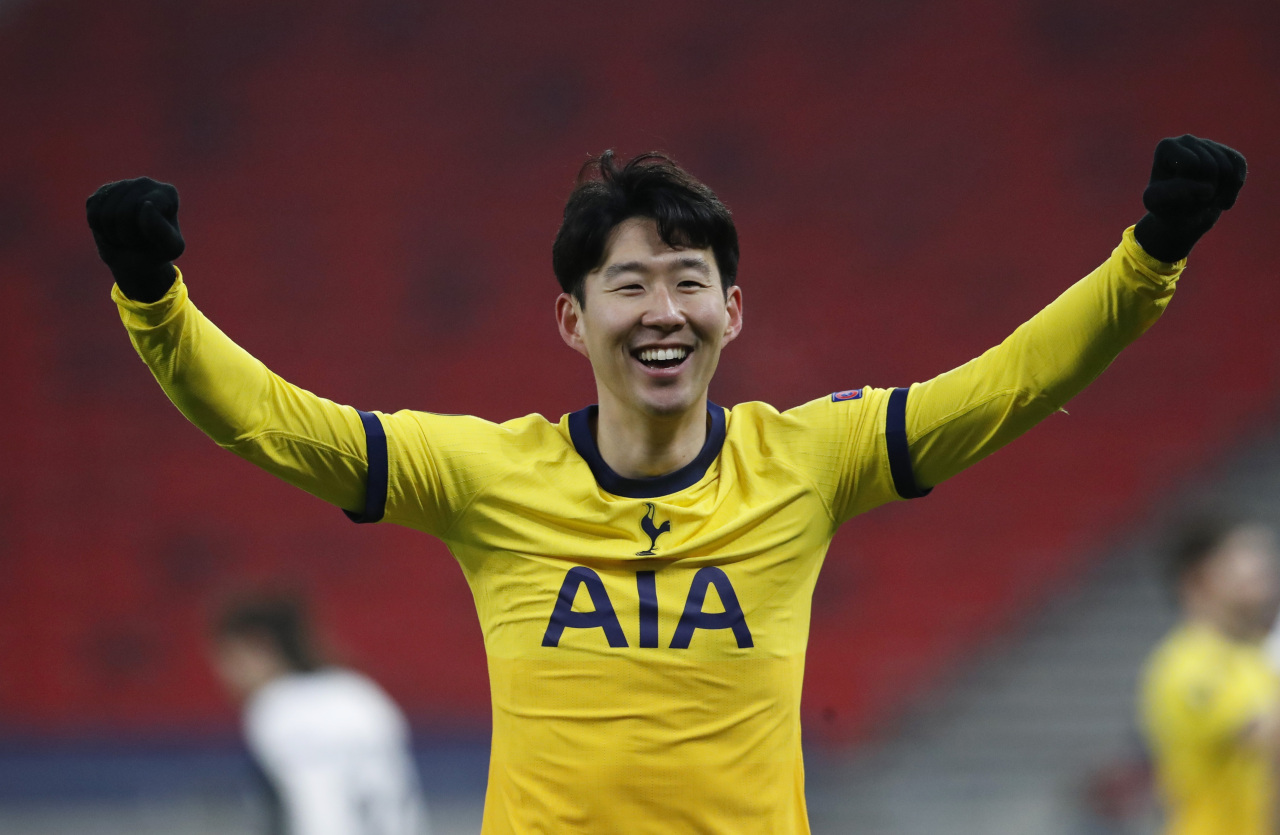 In this Reuters photo, Son Heung-min of Tottenham Hotspur celebrates his goal against Wolfsberger AC in the clubs' round of 32 match at the UEFA Europa League at Puskas Arena in Budapest on Thursday. (Reuters-Yonhap)
Tottenham Hotspur's Son Heung-min has scored his 18th goal of 2020-2021 while setting a new career high in combined goals and assists for a season.

Son opened the scoring for the Spurs in their 4-1 victory over the Austrian side Wolfsberger AC 4-1 in Budapest on Thursday (local time) in the first leg of the round of 32 at the UEFA Europa League. Son's header, set up by Gareth Bale, came in the 13th minute.

The second leg is scheduled for next Thursday at Tottenham Hotspur Stadium in London.

Son now has 31 attacking points from 18 goals and 13 assists, surpassing his previous best of 30 points (18 goals and 12 assists) from last season.

For his Tottenham career, Son has now netted 20 goals in European competitions, with 14 in the Champions League and six in the lower-tier Europa League. He is only the fourth Tottenham player to reach that milestone, after Harry Kane, Martin Chivers and Jermain Defoe.

With Tottenham comfortably ahead 3-0 at the break, Son was rested in the second half.

Son scored his goal at Puskas Arena, which served as a neutral venue in place of Wolfsberger AC's home due to effects of COVID-19. The stadium was built in honor of a former Hungarian national team captain, whose name also graces the annual FIFA trophy presented to the player who scored the best goal each year. Son was the 2020 recipient of the Puskas Award.

"Being here is very special because I won the award," Son said in an interview clip tweeted by Tottenham. "But getting the win is more important than the special feeling."

As for the team's quick start, marked by his 13th minute goal, Son said, "It was very important that we showed, from Minute 1, that we wanted to win not just 1-0 or 2-0. I think the guys had a really good mindset." (Yonhap)