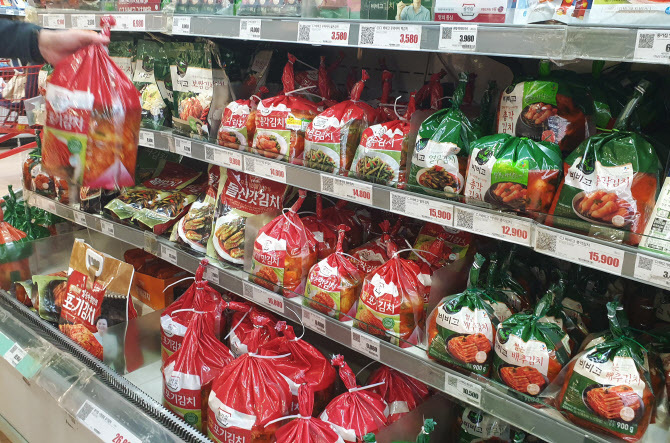 Packaged kimchi products are displayed at a supermarket in central Seoul in this file photo taken on Oct. 9, 2020. (Yonhap)
South Korea's exports of kimchi reached a new all-time high in 2020 thanks to its popularity amid the coronavirus pandemic, data showed Monday.

Overseas shipments of kimchi came to $144.51 million last year, up 37.6 percent from a year earlier, according to the data from the Korea Customs Service and industry sources.

The amount breaks the previous yearly record of $106.61 million registered in 2012.

Last year, kimchi was exported to nearly 80 countries. Japan was the biggest buyer of South Korean kimchi products in 2020, with its imports standing at $71.1 million, or nearly 50 percent of the total.

Industry watchers attributed last year's surge in kimchi exports to the popularity of the fermented food that is considered to boost the body's immune system amid the COVID-19 outbreak.