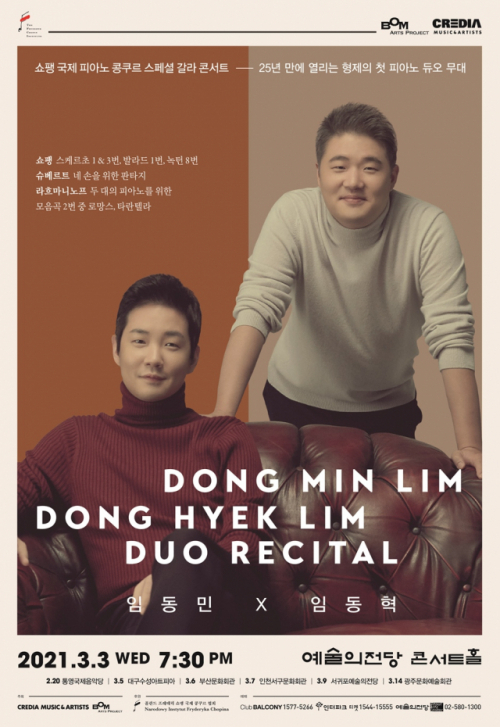 The tour will kick off in Tongyeong, South Gyeongsang Province on Feb. 20, followed by Daegu, Busan, Incheon, Jeju Island and Gwangju.

The Seoul recital is held as part of the special gala concert ahead of the 18th International Chopin Piano Competition. The first half will feature works by Chopin, while the piano duo will perform after the intermission.

Pianist Lim Dong-min will play Chopin’s Scherzo No. 1 and No. 3, while Lim Dong-hyek will present Chopin’s Ballade No.1 and Nocturne No. 8.

In the duo performance, the two brothers will play Schubert’s “The Fantasia” in F minor for piano four-hands, Rachmaninov’s Suite for Two Piano, Romance and Tarantelle.

The Lim brothers were the first Koreans to win an award at the Chopin Competition, jointly taking third place in 2005. There was no second-place winner. They were also the first brothers ever to win at the event, founded in 1927.

After the win, the two brothers earned the title as Chopin specialists, pursuing their studies of Chopin’s works. They have also each released an album dedicated to Chopin. The two are known to have shown great dedication to Romantic-era composers through their career

According to Credia, the organizer of the recital, the two Lim brothers performed together in 1997, 2006 and 2014. They had played solo works or concertos separately during the events. The upcoming recital is the first time for the two brother pianists to present a duo performance.