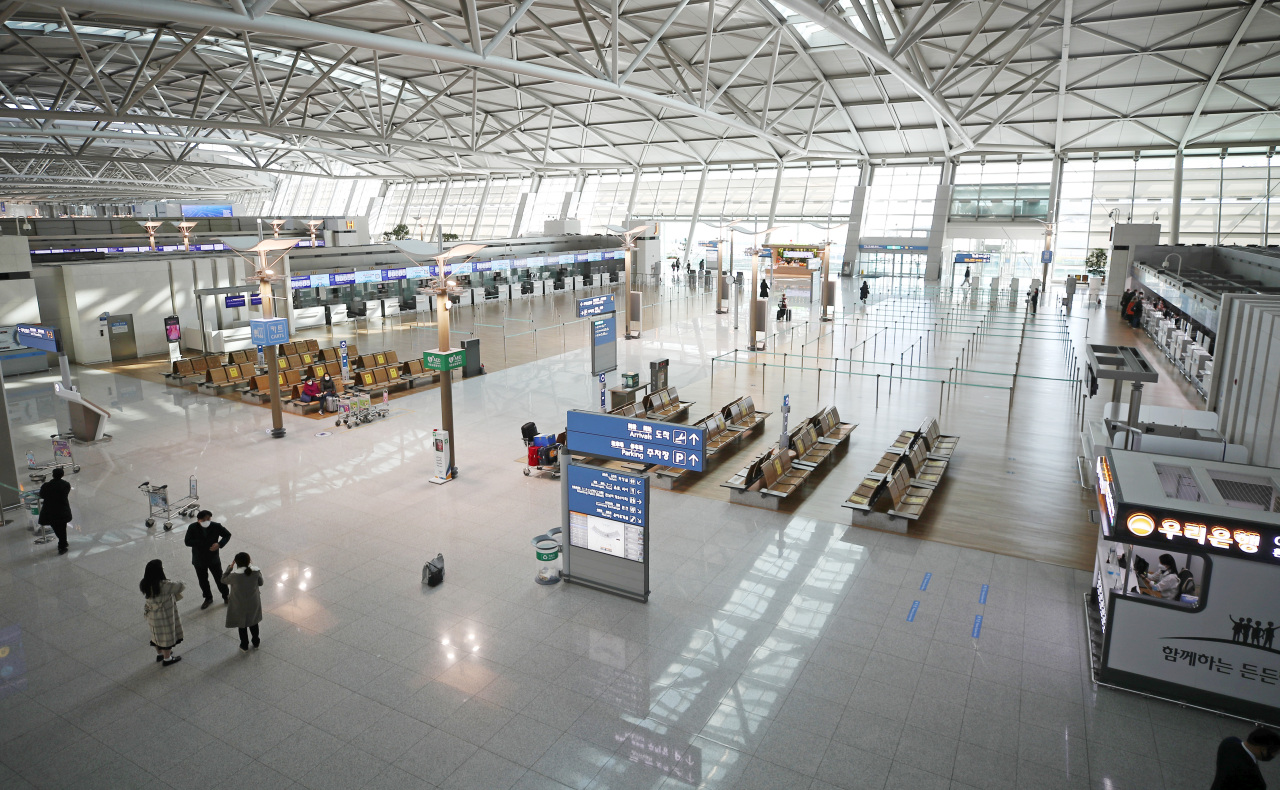 An interior view of Incheon International Airport's departure area on Jan. 19. (Yonhap)
JPMorgan Asset Management has increased its stake in the ailing Korean travel agency Modetour Network to 7.47 percent, banking on a rebound in the post-COVID era despite piling losses, a filing showed Wednesday.

Three of JPMorgan Asset Management subsidiaries obtained an additional 1.07 percent stake, or some 200,000 ordinary shares, in Modetour from December 2019 to January this year, according to the filing.

This solidified JPMorgan’s position as the firm’s second-largest shareholder next to Woo Chong-woo, founder and chief executive of Modetour, who holds a 10.87 percent stake.

JPMorgan is subject to disclosure obligations as a Modetour blockholder since 2015 and has said it does not intend to conduct any acts that may influence the management.

The news comes as Korea’s major travel wholesalers dedicated to outbound tour operations are reeling from mounting financial burdens due to travel restrictions posed by the COVID-19 pandemic.

Modetour recorded a 25.1 billion-won net loss in the first three quarters of 2020, a drastic turnaround from a 7.4 billion net profit a year prior.

Also in the third quarter, Modetour’s liabilities grew larger than its cash reserve for the first time since the pandemic. According to Hyundai Motor Securities analyst Kim Hyun-yong, the remaining cash buffer will still allow the company to stay afloat for the next two years, on the premise that its outbound tour business resumes in the fourth quarter of 2021.

Its rival HanaTour Service, largely controlled by IMM Private Equity, is moving to secure cash through an asset selloff to survive the pandemic. HanaTour on Tuesday announced plans to sell its headquarter building in Seoul for 94 billion won in June, as its preliminary earnings release showed its full-year net loss jumped 18-fold to 220 billion won.

Moreover, both companies reportedly used up government subsidies to offset payroll costs in a state-led contingency bailout. HanaTour is considering a corporate downsizing and Modetour is looking to impose unpaid leave on employees later this year.

Their stock price, by contrast, showed a sharp rebound.

With stock price bottoming out to a near 7,000-won level in March and a moderate rebound until May, Modetour’s stock price began to rise sharply since the fourth quarter of 2020, to over threefold compared with its 52-week low. HanaTour’s stock price also jumped twofold from its lowest price point in March.