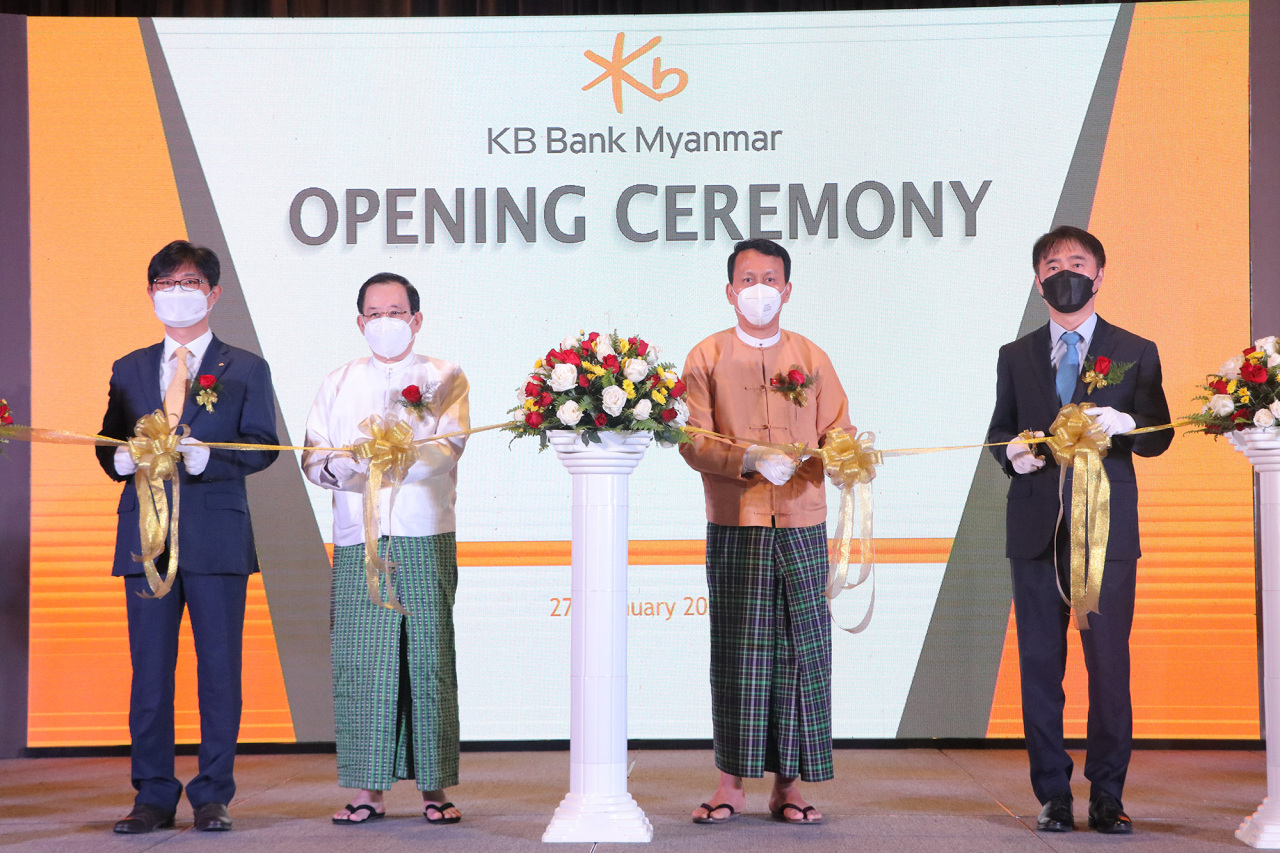 KB Kookmin Bank hosts an opening ceremony for the launch of its first subsidiary in Myanmar on Jan. 27. (KB Kookmin Bank)
South Korean banks have ordered their employees in Myammar to stay at home and launched emergency safety measures, as of Tuesday, upon the news of the military having taken control of the ASEAN nation in a coup.

The coup is expected to put a damper on the lenders’ plans this year to expand their presence in the ASEAN economies, to recover from blows dealt by the coronavirus pandemic.

For local banks this year, Myanmar was supposed to work as a springboard for recovery from coronavirus woes. A total of 12 local banks have so far entered the market.

KB Kookmin Bank – one of five major banks here – and state-run institutions Industrial Bank of Korea and the Korea Development Bank all launched their first subsidiaries there in January. NH NongHyup Bank, in October last year, established its first office in the city of Yangon in hopes to further expand its business in the country.

It was only five days prior to the coup that KB Kookmin celebrated the launch of its Myanmar subsidiary. Since launching its Yangon office in 2013, the event was largely anticipated as KB Kookmin was the first foreign bank to receive a license from the Myanmar financial authorities to establish a subsidiary there.

KB Kookmin has yet to order telecommuting for its employees in its office-turned-subsidiary and some 20 branches and microfinancing institutions in Myanmar, as of Tuesday. However, a hotline between the Seoul headquarters and the subsidiary there has been established for close monitoring, a KB Kookmin official said.

Meanwhile, state-run IBK and KDB have ordered their employees, mere weeks after the launches of its subsidiaries, to telecommute from home due to safety issues.

IBK, Shinhan and Hana even decided to indefinitely shut down its business for the time-being. Shinhan has a branch in Yangon, established in 2016 and Hana operates a microfinancing business in the country.

Their industry peer NH NongHyup has “dispatched a minimum number of employees necessary” in its recently established Yangon office and temporarily shut down its microfinancing institution, which is its one other business in the country.

Korean banks have been setting foot in Myanmar since the country opened its doors to foreign investors less than a decade ago, after the Aung San Suu Kyi administration won the general elections in 2015.

In recent years, its fast economic growth and business potential attracted many Korean financial institutions that were looking to diversify their revenue sources outside the saturated local market. Myanmar’s economy saw an average growth rate of 8.43 percent from 1994 until 2019.

However, onlookers worry that the latest coup will jeopardize foreign businesses operating there.