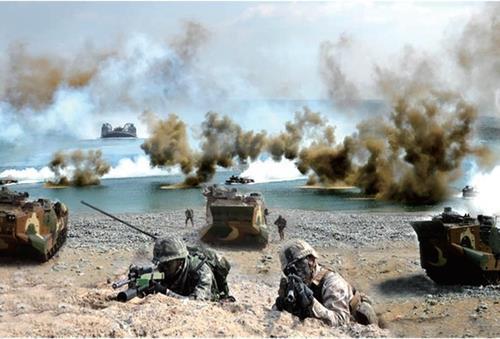 Marines from South Korea and the US take part in amphibious landing drills in April 2020. (Ministry of National Defense)
A prolonged pause in South Korea-US joint military exercises involving full-scale field training will diminish Seoul’s capability to mount a defense against North Korea, military experts said ahead of March drills. They are expected to be conducted indoors through computer-based war games.

Last week, Defense Minister Suh Wook confirmed that the March drills will not involve troops on the ground.

Seoul and Washington, which have held drills annually to deter aggression from Pyongyang since the 1953 Korean War armistice, now take part in computer simulations of war rather than all-out field exercises.

That has been the new norm since August 2018, two months after the first historic summit between the US and North Korea, during which President Donald Trump discussed suspending the field drills to save costs and facilitate the North’s denuclearization.

The US brings in its own troops -- including members of reserve forces, who have other jobs -- and strategic weapons such as stealth bombers and aircraft carriers.

“The full-scale field training is key in the joint drills. The synchronization of assets -- troops and equipment -- drastically expands our firepower and ensures the optimal combat readiness. We’ve done it for decades for a reason,” said Rep. Shin Won-sik of the main opposition People Power Party.

Shin, who served as vice chairman of the Joint Chiefs of Staff before joining the National Assembly, argued that small-scale or independent field drills -- where Seoul and Washington practice on their own -- cannot replace the decades-long full-scale drills.

“If that were the case, we’ve wasted years doing it full-scale together, haven’t we?” the former No. 2 at the JCS said, referring to Foal Eagle, one of the world’s largest field exercises, held here annually from 1961 to 2018.

Shin Jong-woo, a senior analyst at the Korea Defense and Security Forum, said suspending the field training is what North Korea wants most. American strategic weapons like stealth bombers are a nightmare for leader Kim Jong-un, who has to take precautions when they fly over, he said.

Kim has repeatedly demanded that South Korea stop bringing in what he called “America’s latest weapons.”

Kim Ki-ho, a retired Army colonel who was once in charge of operations at the Combined Forces Command between Seoul and Washington, said the North’s Kim has another reason to oppose the field drills.

“North Korea rallies civilians to take part in their own military drills, which it holds in response to ours. It’s a strain on their economy every time the cash-strapped regime does that,” retired Col. Kim said, adding that Pyongyang can ill afford to take people out of the workplace.

The computer war games alone are insufficient because numbers on computers do not translate precisely into numbers on the ground, according to Col. Kim, who said the hiatus in the field training would not invite Pyongyang’s disarmament. Seoul has to reverse course, he added.

But there is no sign that South Korea will return to the exercises in near future. Defense Minister Suh sided with President Moon, who spoke of consulting North Korea on all the joint drills if necessary. The pro-engagement leader is seen as seeking a breakthrough in stalled inter-Korean ties.

“We’re blindfolded, as long as we don’t get the hands-on experience in the field. That’s for sure,” Col. Kim said.