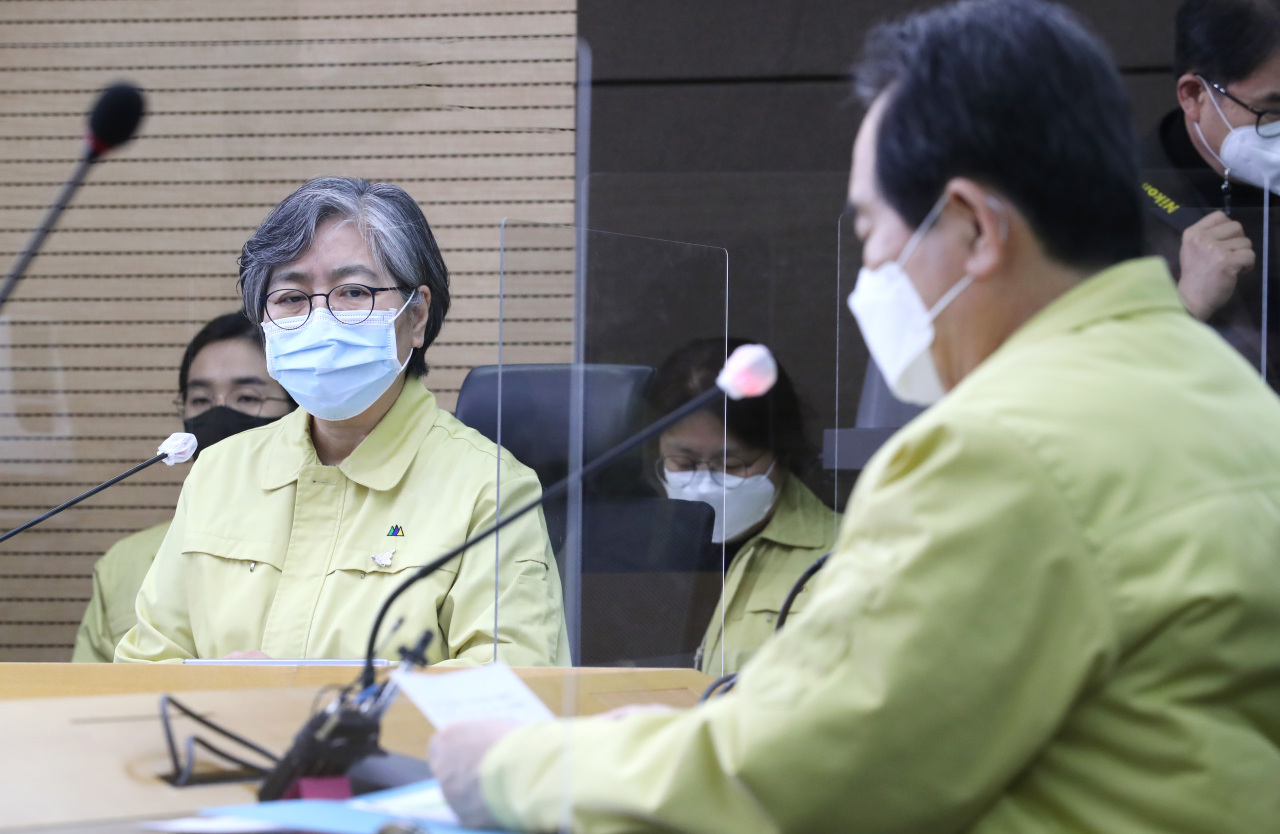 The Korea Disease Control and Prevention Agency's chief Jung Eun-kyeong (left) speaks with Prime Minister Chung Sye-kyun (right) in a Jan. 12 meeting on COVID-19 vaccinations. (Yonhap)
The South Korean government on Monday said that foreign residents in the country will also be given the COVID-19 vaccine for free, as will Korean nationals, once the vaccines are rolled out.

The Korea Disease Control and Prevention Agency’s chief Jung Eun-kyeong, who will helm the immunization efforts in the country, told a news briefing that “everyone here, including foreign residents, will be given the vaccines free of charge.”

The announcement comes as the authorities scramble to finalize the vaccination plan, under which the country hopes to dole out its first doses by late February or early March.

At the time of writing, the agency has not yet responded to The Korea Herald’s questions asking if the plan would include foreign residents without National Health Insurance Service subscriptions and those who are in the country illegally.

Jung said the first governmental meeting on COVID-19 vaccinations was held on Jan. 12, where officials from the Drug Safety, Transport, Defense and Interior ministries were present.

In a New Year’s press conference on Monday, President Moon Jae-in said Korea will have herd immunity by September, two months earlier than the KDCA’s estimate of November.

“The first rounds of inoculations against COVID-19 will be completed by around September, at which point herd immunity will have been reached,” he said. “Korea is not at all behind compared to other countries, but rather ahead, with regards to the point of herd immunity.”

Moon said the country would “lead the world in overcoming the health crisis” and “be the first to return to everyday life and economic activities.”

He added that Korea was “certainly recovering from the third wave of the infections, with the case count falling to the 300s (on Monday).”

In a press briefing held later the same day, the agency commissioner however shied away from premature rosy forecasts. “The virus trends in the country have not quite yet stabilized,” she said, urging continued caution.

Korea on Sunday carried out 38,007 tests and confirmed 389 more cases of COVID-19 -- 366 locally transmitted and 23 imported -- the lowest number seen since November. The cumulative total of official cases now stands at 72,729.

In the last seven days ending Saturday, the number of local cases registered per day averaged 516.1, down 30 percent from the week before.

Currently there are 12,742 patients with active infections, of whom 343 are severely or critically ill. Overnight, 470 patients were discharged from care.

Fifteen more people died, with the death toll reaching 1,264. Over half of the 136 people who died last week contracted the disease at nursing homes or hospitals. An overwhelming majority, 96 percent, were older adults aged 60 or above.

By region, 66.7 percent of all known cases so far have occurred in Seoul and the satellite regions of Gyeonggi Province and Incheon.

As more contagious variants of the virus are being reported overseas, Korea has begun requiring negative PCR test results for all noncitizens wishing to enter the country starting from Jan. 8. Last week, about 30 percent of all cases detected were from international arrivals.