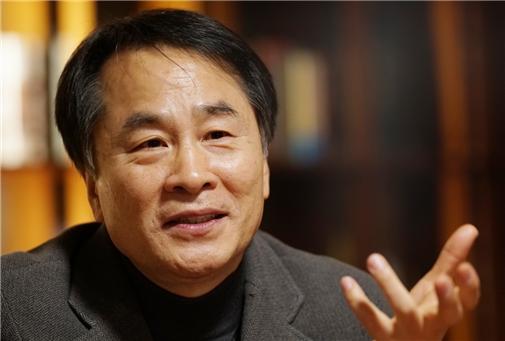 Lee Seung-u (Munhaksasang)
Lee Seung-u’s “Heart’s Buoyancy” won the 44th Yi Sang Literary Award, one of the most prestigious literary awards in Korea given by publishing company Munhaksasang, on Monday.

“A novelist getting a prize for his work is like unfamiliar guests suddenly coming into the clerk’s office full of rules and repetition,” said Lee in receiving the award. “Why did the guests come find me? Instead of asking the guests the reason, I will once again continue to do my work like a clerk. I don’t think it is my right to ask them why. More importantly, there is work to be done.”

“Heart’s Buoyancy” is about the sense of debt and guilt a mother and son face following the death of the elder brother. It is like a belated excuse that those left behind give to the one who left them behind, according to the author.

“The precise depiction of characters’ emotions and elegant writing show the qualities of the short story,” said the judges regarding the work. “It succeeded in combining the relatively heavy and ideological topic of sense of debt and guilt between mother and son with diverse real social, ethical problems in a novelistic way.”

The Yi Sang Literary Award, established in 1977, faced controversy last year when three runner-up authors refused the prize due to the award‘s unfair contract that gave copyright of their works to Munhaksasang for three years. This led to the literary community boycotting the awards and many notable authors supporting the cause. Yoon Yi-hyung, the winner in 2019, also announced an end to her writing, saying she felt ashamed at having been given the prize.

The award wasn’t given last year, for the first time in the history of the prize that was established in 1977. The publishers apologized and amended the contract. The prize money was also increased to 50 million won ($46,100) from 30 million won this year, and preliminary judging was done by appointed judges rather than by the editors.

Meanwhile, Lee’s work and five works chosen as runners-up will be published later this month.