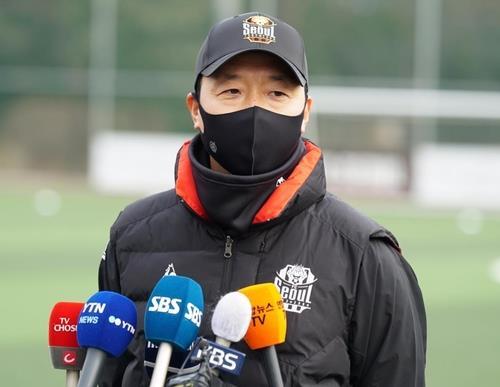 Park Jin-sup (Yonhap)
FC Seoul finished in a disappointing ninth place among 12 clubs in the K League 1 in 2020, just a year after ranking in third place.

And their new head coach, Park Jin-sup, is determined to take them back to the upper echelon, because that's where he thinks FC Seoul belong.

"I think that is where we're supposed to be," Park told reporters Monday, before opening offseason camp at GS Champions Park, the club's training facility in Guri, just east of Seoul. "We have some veterans and promising young players. It's important to create harmony between these two groups."

FC Seoul went through three coaches to play out their disappointing K League 1 campaign, and then needed a fourth bench boss to compete at the Asian Football Confederation (AFC) Champions League in December.

They signed Park away from another K League 1 club, Gwangju FC, on Dec. 8 to bring much-needed stability on the bench. Park has since named his assistants to complete the staff for Year 1 of his three-year contract.

In 2019, FC Seoul finished behind the K League's two giants, Jeonbuk Hyundai Motors and Ulsan Hyundai FC. Jeonbuk and Ulsan ended up first and second once again in 2020, powered by deep, talented rosters.

"It's going to be difficult at first, but I think we should eventually form rivalries with Ulsan and Jeonbuk," Park said. "I'd like our team to have a good balance between offense and defense and to play with a strong structure. I want to hear other teams say we're tough to play against."

Park, 43, is one of four new coaching hires in the K League this winter. Both Jeonbuk and Ulsan will have new bench bosses, too. For Jeonbuk, top assistant Kim Sang-sik has been promoted to take over from Jose Morais. Ulsan parted ways with Kim Do-hoon, their coach of four seasons, and signed South Korean football icon Hong Myung-bo.

Park said he has some personal history with both of those new coaches and he can't wait to go up against their teams in the new season.

"I am looking forward to creating fun storylines for our fans, and obviously, I'd love to beat those coaches," Park said. "Last year is in the past, and we want to give our supporters something to cheer about."

With Park at the helm, Gwangju FC won the 2019 K League 2 title to earn an automatic promotion to the K League 1. And in their first season with the big boys, Gwangju overcame a shaky start and finished in sixth place, ahead of more storied clubs such as FC Seoul and Suwon Samsung Bluewings.

"My job is to develop young players so that they'll be leaders of Korean football in the future," Park said. "We have some strong personalities on this club, but I am not too worried about how they can all come together. Everyone here is working toward a common goal."

One of FC Seoul's key veterans is midfielder Ki Sung-yueng, who made a much-hyped return to the K League 1 club last summer after more than a decade overseas.

The 31-year-old was limited to just five matches, however, as he was dealing with effects of an ankle injury he'd suffered while playing in Spain earlier in 2020.

Ki said Monday that he never received proper treatment in Spain and he couldn't afford to be on the sidelines to rehab in South Korea when FC Seoul needed him immediately.

Ki added he should be fully healthy in 2021 after rigorous rehab over the past two months.

"We have a couple more months before the season, and I should be 100 percent healthy by then," Ki said. "I felt terrible about not being able to help the team last year. I want to make up for that this year."

The midfielder echoed Park's sentiment that FC Seoul didn't finish where they should have in 2020.

"First and foremost, we have to play better for our supporters," Ki said. "I felt Gwangju FC were a really close-knit team (under coach Park) last year, and I think he will have success here with us this year." (Yonhap)