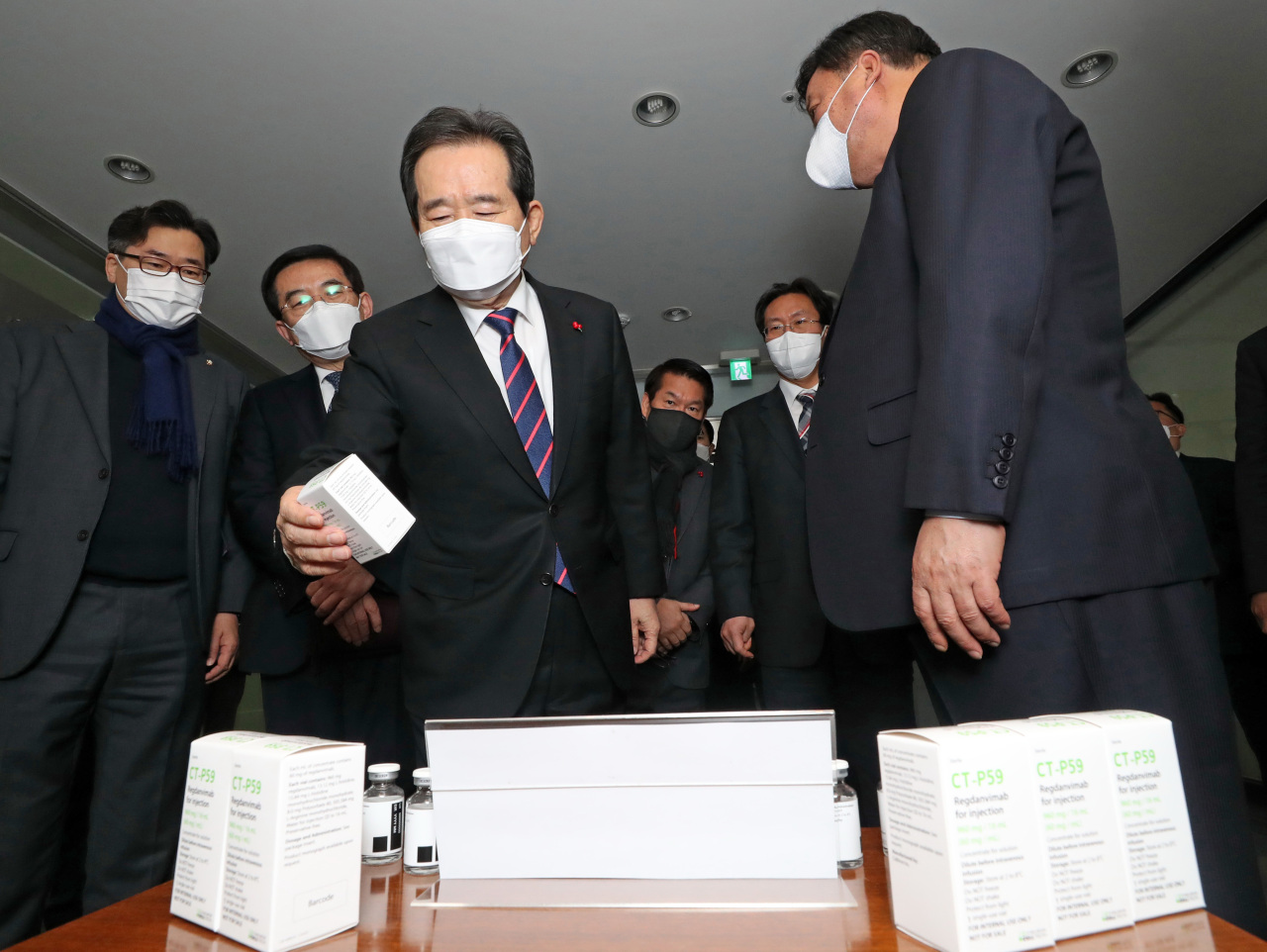 Prime Minister Chung Sye-kyun is photographed during his visit to a Celltrion facility last week. In his hand is a COVID-19 antibody drug the company is developing. (Yonhap)
Politicized narratives surrounding COVID-19 vaccines and treatments must stop, and vaccines -- not treatments -- are the keys to ending the pandemic, experts say.

Faced with growing discontent over South Korea’s lag in COVID-19 vaccinations, the government and ruling Democratic Party of Korea have taken to highlighting COVID-19 treatments being developed by local companies, while emphasizing possible adverse effects of vaccines.

In their efforts to downplay vaccines and bring more attention to treatments, some politicians have gone as far as to suggest that treatments could put an end to COVID-19 here.

The ruling bloc’s fixation on treatments, while at the same time undermining the vaccines, is misleading, experts say.

“No scientist will tell you that a treatment -- no matter how effective -- could eradicate COVID-19,” said Dr. Shin Eui-cheol, a viral immunologist at the Korea Advanced Institute of Science and Technology.

“Hypothetically speaking, if we could have only one or the other, scientists will choose vaccines over treatments,” he said. “Not once in the history of the human race has an infectious disease been conquered without a vaccine.”

There is a particular hype surrounding local drugmaker Celltrion, which filed for approval of its COVID-19 antibody treatment for use on Tuesday. The results of its phase 2 trial are yet to be announced.

Pulmonologist Dr. Jung Ki-suck said that vaccines and treatments could not be discussed on equal terms.

“Treatments are used after you have come down with the disease while vaccines protect you from contracting it in the first place,” he said, adding that phase 3 trial will have to be completed for a treatment to be considered reliable.

“But it looks like we won’t have such an option for a while,” he said.

Another pulmonologist, Dr. Chun Eun-mi said the antibody treatment had “a potential to reduce hospitalizations.”

“For people who are at risk of having a worse outcome, it could make a difference,” she said.

But its use was limited. “It would be useful only in patients in the early stages of the disease, before symptoms get worse,” she said.

The US already has Eli Lilly and Regeneron -- antibody therapies similar to one being developed at home. But neither helped the country control the epidemic in meaningful ways, she added.

“It’s not possible to vouch for safety of a treatment without a randomized, placebo-controlled study,” said infectious disease specialist Dr. Kim Woo-joo.

Antibody-based therapies could trigger a phenomenon known as antibody-dependent enhancement, which amplifies the infection and exacerbates the symptoms, he explained.

As countries around the world begin to roll out COVID-19 vaccines, the government has come under fire for having procured “too little and too late.”

According to a recent poll by Realmeter, about 6 in 10 Koreans believe vaccinations against COVID-19 should begin as soon as possible.

Amid the mounting public pressure, ruling party lawmakers hit back at the criticism by undermining the role of vaccines in containing the pandemic.

“It appears there are claims that vaccinations can put an end to the coronavirus crisis,” Rep. Kim Woni of the Democratic Party said at a Dec. 22 confirmation hearing for the new health minister.

Democratic Party Rep. Kim Sung-joo warned against “treating vaccines as if they are the only solution.”

“There are treatments and other precautionary steps we can take,” he said.

But a vaccine against COVID-19 would be “essential for ending this pandemic,” according to Dr. Rhee Chul-woo, a research scientist at the International Vaccine Institute. “Whereas effective treatment can help manage individual infections.”

“But there’s no denying it’s the vaccines that will save the day,” he said.

Politicians as well as top health authorities continue to suggest the shots might not be safe.

Prime Minister Chung Sye-kyun, who leads the government’s task force for COVID-19 response, reiterated until recently that Korea was “in no rush for vaccines,” and that the country would “wait until they are proven to be safe and effective.”

The Ministry of Health and Welfare’s spokesperson Son Young-rae told a Dec. 23 news briefing Korea was “rather fortunate to not be the first in the world to be vaccinated,” citing potential safety issues.

“These are brand new vaccines that have been developed rapidly by cutting down the usual process,” he said.

Rep. Kim Tae-nyeon, the Democratic Party floor leader, likewise argued the safety of the vaccines should be verified before they could be put to use here.

“The opposition party and the media are creating a fuss over when Korea will begin vaccinations,” he said.

“But in the US, where vaccinations are the only feasible countermeasure, there have been reports of adverse side effects such as allergies and facial paralysis among people who received the shots.”

Experts worry such messaging could lead to public mistrust in the vaccines.

“The first of the purchased vaccines will reach Korea in a few months. How are they going to convince people to get vaccinated after all this fearmongering?” KAIST’s Shin said.

“Leaders around the world are trying to reassure people that the vaccines can be trusted. It bewilders me that ours are doing the opposite,” he said.

Besides, the attack on the safety or potency of the vaccines had “no basis in science,” he said.

He said he was “immensely confident” the vaccines are safe and effective, “based on the best of our scientific understanding so far.”

The mRNA technologies and the speed at which they were developed were “extraordinary feats of science, rather than a cause for concern,” he said. “More than 1 million people have been vaccinated for COVID-19 without major safety concerns to date.”

He added that once the vaccines are put to broader use, rare side effects will emerge. But no vaccine is “absolutely without side effects,” and most adverse reactions will be “mild and expected.”