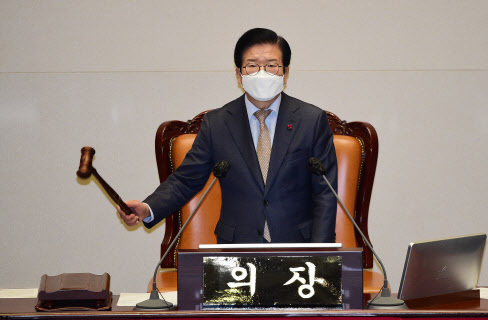 In recent videoconferences with Li Zhanshu, chairman of the Standing Committee of the National People’s Congress of China, and Oshima Tadamori, speaker of the House of Representatives of Japan, Park raised the need for a meeting of the National Assembly speakers from the three nations.

“Amid the prolonged pandemic situation this year, we believe that efforts to overcome the crisis through close communication and cooperation among three nations are needed more than ever before,” Park told his Chinese counterpart Li via a video conference on Dec. 21.

He also suggested forming a Korea-China-Japan quarantine and health cooperation body to resolve health and security crises caused by the pandemic. As for vaccines, Park said it is important to ensure fair access to the COVID-19 vaccine and treatments as an international public good.

In response, Li said, “The three countries are important partners not only in the region but also globally.”

“I support Park’s proposal for the China-Korea-Japan National Assembly speakers’ meeting,” he said, requesting the Korean side make efforts to make the meeting happen.

Park also urged the Chinese side to take an active role in establishing a peace regime on the Korean Peninsula. He said, “It is hoped that North Korea will return to dialogue in a cautious and future-oriented manner during the leadership change of the US,” asking China to take more interest and effort.