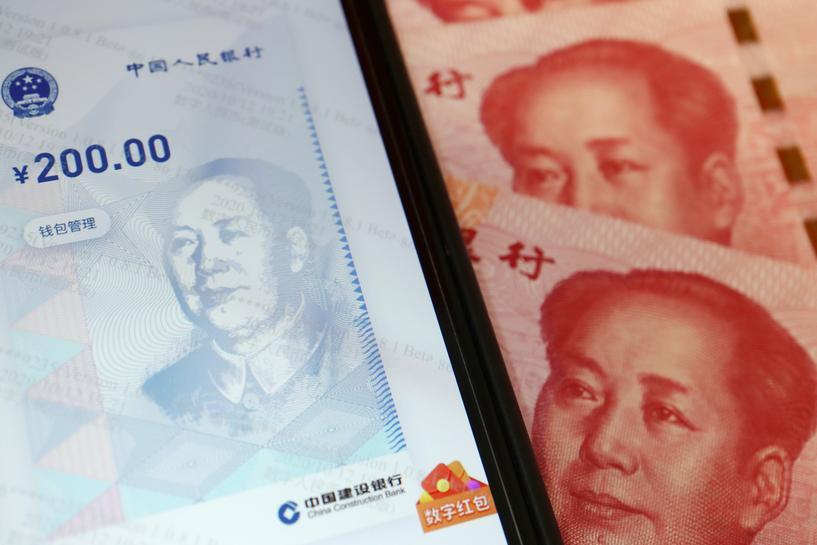 China`s official app for digital yuan is seen in this illustration picture taken October 16, 2020. (Reuters-Yonhap)
As China accelerates the development of its sovereign digital currency, South Korea should prepare for looming changes that the new form of money may bring about to its largest trading partner, experts had said as of Sunday.

China has been intensifying its efforts to introduce the digital yuan, known officially as the Digital Currency Electronic Payment, with the second round of its pilot program launched earlier this month for testing on major e-commerce platforms like JD.com, the country’s largest online retailer. The first round of pilot testing, which was conducted in October, was limited to offline transactions.

Noting the fast-paced development, experts warned that Korean banks must come up with both digital and legal systems to deal with the usage of the central bank-backed digital yuan here.

“China has become the frontrunner of digital currency development and the possibility of expanding its payment system and circulation overseas has grown,” Lee Hwa-jung, a researcher at Hana Financial Institute, said in a report released last week.

“This has accelerated the digital currency development of major economies … and Korean banks must prepare for the adoption of DECP in payments and financial transactions tied to trade with China,” she added.

Though there is a low possibility that the digital yuan will shake up the global digital payment system “anytime soon” -- due to the exclusive nature of China’s financial market -- it is likely to gradually spread through financial transactions in trade, overseas construction projects and paychecks to overseas labor forces, the report said.

Countries and organizations involved in Beijing’s Belt and Road Initiative – which aims to bolster China’s connectivity with the world – are likely to be subject to the DECP system, as well.

Korea – which relies on China for more than a quarter of its total outbound shipments – must come up with legal and technological measures to resolve any possible issues stemming from currency exchange, Lee warned. Local lenders must keep an eye on their yuan deposits, of which the DECP could trigger a possible disruption and outflow. This could happen as local investors start to prefer the digital yuan to actual banknotes, she added.

In Ho, a Korea University professor who also leads the Korea Blockchain Association has echoed Lee on the need to swiftly establish a solid legal system and financial measures.

“The global economy has already entered a competition of becoming a frontrunner of digital finance,” he said in a recent seminar.

“To survive here, well-developed regulations and the legal system is crucial,” he added, citing Switzerland’s move earlier this year to amend its law to welcome cryptocurrencies and blockchain technology into the mainstream market.

While other major economies have been taking large strides in the global competition for the central bank-developed digital currency, Asia’s fourth-largest economy has been somewhat lagging behind.

Sweden and Japan have either wrapped up their trial runs or finished preparations for more direct test-runs. Some onlookers even expect the US and China to lock horns in a “digital currency war,” as the US Congress has been pushing for a digital dollar this year, fueled by competition with Beijing.

Meanwhile, the Bank of Korea has been treading cautious steps, saying it would merely test-run the system in a “virtual environment” next year.