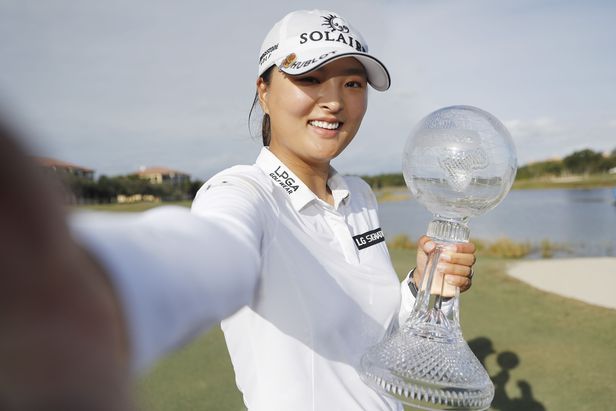 Ko Jin-young (AFP-Yonhap)
World No. 1 Ko Jin-young has won the LPGA season finale in Florida, capping off a truncated campaign in come-from-behind fashion against a rival countrywoman.

Ko won the CME Group Tour Championship by five strokes over world No. 2 Kim Sei-young and Hannah Green of Australia in Naples, Florida, on Sunday (local time). Ko shot a six-under 66 at Tiburon Golf Club for a four-round total of 18-under 270.

By earning $1.1 million in her first victory of 2020, Ko won her second consecutive money title with just over $1.66 million. This was only Ko's fourth tournament of the season and her third top-five finish.

The 2019 LPGA Player of the Year didn't make her season debut until November. She'd planned to begin her season in March, but the tour pressed pause in mid-February due to the coronavirus outbreak. The season resumed at the end of July, but Ko opted to stay home for a few more months during the pandemic.

Ko tied for 34th at the Pelican Women's Championship in November but then finished fifth at the Volunteers of America Classic and tied for second at the US Women's Open earlier this month. She earned just enough points to qualify for the CME Group Tour Championship, and the 25-year-old made the most of that opportunity for her seventh career victory.

Ko began the final round trailing Kim by one shot at 12-under. Another member of the final group, Georgia Hall of England, was at 10-under.

She immediately tied Kim at the top thanks to her birdie at the first hole, and went up by a stroke when Kim bogeyed the par-3 fifth hole. The two had matching birdies at the sixth hole, with Ko still enjoying a one-shot advantage at 14-under.

Ko fell back into a tie with a bogey at the ninth, but that turned out to be her only blemish of the day.

Kim blinked again with a bogey at the 11th while Ko saved par, and Ko opened up a two-shot lead with a birdie at the 12th.

Ko then birdied the next two holes to reach 16-under. Kim mustered a birdie at the 13th but committed her third bogey of the day at the 15th to fall four shots back with three to play.

Both players picked up birdies at the 16th and then Ko had the icing on the victory cake with a closing birdie at the 18th.

As a consolation prize, Kim clinched her first career Player of the Year award. She earned 12 points with her runner-up finish and finished with 118 points, six ahead of compatriot Park In-bee.

Kim is the second straight South Korean to win the Player of the Year points race, following Ko from 2019. (Yonhap)