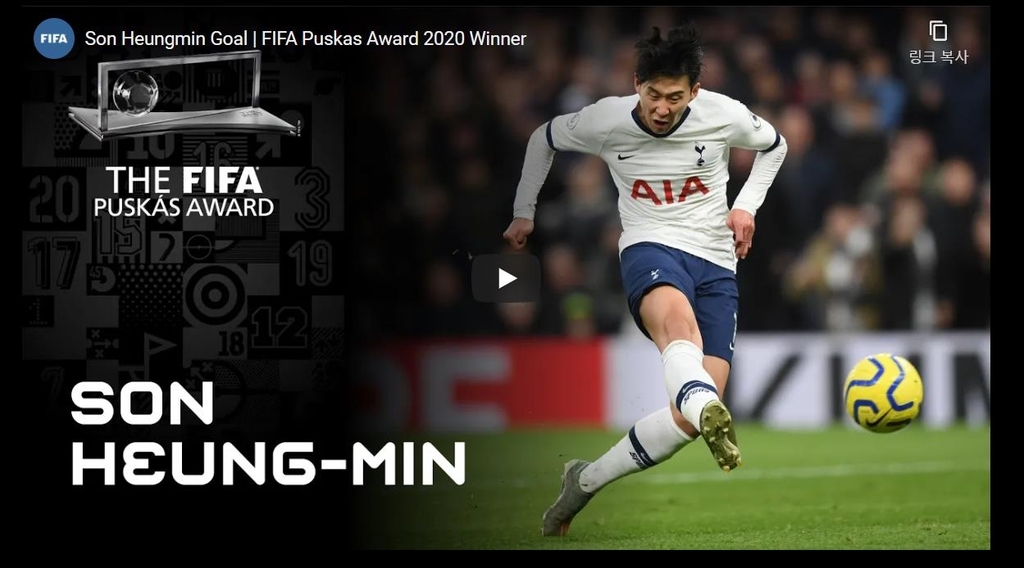 He became the second Asian player and the first in South Korea to win the award.

Established in 2009 in honor of former Real Madrid striker Ferenc Puskas, the Puskas Award is presented to the player, male or female, who is judged to have scored the best goal in the given year.

"Twelve thrilling seconds were all it took for Son Heung-min to take the ball from his own 18-yard box and find the net at the other end," FIFA said on its homepage. "The goal showcased everything that has led Tottenham Hotspur fans to fall in love with their Korea Republic star, with pace, power, persistence and clinical finishing all on show."

In that Premier League contest against Burnley, Son sprinted from one penalty area to the other, cutting through the heart of the opposing defense for a breathtaking solo goal. Son has garnered a slew of accolades for that effort, including the Premier League's Goal of the Year for the 2019-2020 season.

"It was a very special night, thank you so much (for) all your votes and support. I will never forget this memory," he wrote on his social media account.

Son also recalled the goal in a video interview for the awards.

"When I got the ball, I tried to pass it ... but couldn't find any options, so I started to dribble, and after two seconds, I was in front of the goal. It was such a beautiful goal," he said.

"After I scored the goal, I didn't realize that it was an amazing goal ... but after the game, I watched it again, and I thought it was something special," he added.

"Son Heung-min gave pleasure and pride to South Korean people going through a difficult period due to COVID-19," Park said in a ministry press release. He added that Son's award proved that South Korean football is sufficiently capable of deserving the world's attention.