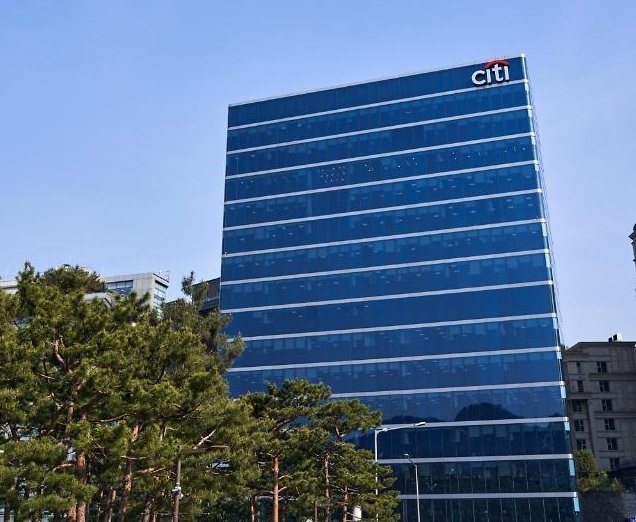 Citibank Korea headquarters in Seoul (Citibank Korea)
Citibank Korea on Monday said it would pay partial indemnities to local businesses that signed currency-linked derivatives sold by the bank more than a decade ago.

The decision was made during a board meeting held in an apparent response to the financial watchdog’s arbitrary recommendation last year to compensate the firms that had faced losses from KIKO -- or “knock-in, knock-out” -- contracts.

“Citibank Korea has been reviewing compensation for firms that have been deemed appropriate for indemnities based on past judicial precedent and those who have yet to take legal action against us,” the local subsidiary of New York-based banking giant said in a statement.

“Our board of directors has decided to pay partial indemnities to financially help small- and medium- sized businesses amid these difficult times despite having no legal responsibility to do so,” it added, referring to the struggling businesses due to coronavirus risks.

The nation’s top court in 2013 ruled KIKO contracts as “not unfair,” clearing the lenders of all fraud charges. The court cited that KIKO’s structure was designed to incur losses to one side and bring profits to the other side depending on market conditions.

In December last year, the Financial Supervisory Service’s dispute settlement committee advised six lenders including Citibank Korea to pay four out of more than 100 firms 15 percent to 41 percent of the losses they faced due to their KIKO investments. It recommended the six banks pay up to a combined 25.5 billion won ($21.8 million) to the four companies, which each reportedly suffered a loss of between 3.2 billion won and 92.1 billion won.

Citibank Korea and the state-run Korea Development Bank previously said in March that they would not accommodate the financial authorities’ arbitrary recommendation. KDB has yet to change its initial stance against the recommendation.

The KIKO currency-linked derivatives were designed to help buyers hedge against currency swings, stated that purchasers could sell foreign currency at a fixed rate when the exchange rate moved within a preset range. They were mostly sold between 2007-2008.

But with the outbreak of the 2008 global financial crisis, the Korean won plummeted 25.7 percent against the US dollar within that year alone -- beyond the range in the contract -- inflicting a heavy blow to KIKO buyers, which were mostly small- and mid-sized businesses.

The buyers accused the lenders of providing them with insufficient warnings against possible risks, including the possible losses they could face when the exchange rate deviates beyond the set range.