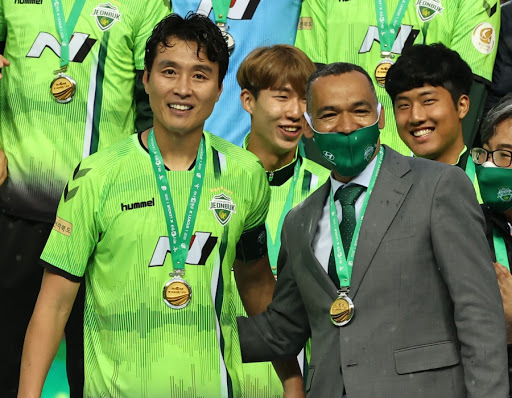 Jeonbuk announced Sunday they have parted ways with the Portuguese coach after his two-year deal expired following the end of their 2020 campaign.

In his two seasons, Morais led Jeonbuk to consecutive K League 1 championships in 2019 and 2020, and also added the Korean FA Cup title this year to complete Jeonbuk's first "double," or winning two major competitions in the same year.

In early November, Morais had told the Portuguese news site Radio Renascenca that he didn't intend to stay in South Korea once his Jeonbuk contract expired and that he had already spoken to Jeonbuk about his plans.

And the parting became official once Jeonbuk wrapped up their Asian Football Confederation (AFC) Champions League on Friday in Qatar. They were knocked out in the group stage of the tournament, as their bid for a "treble," or winning three major trophies in one season, fell flat.

"I've had an unforgettable experience here," Morais said in a statement released by Jeonbuk. "I will always cherish the memories I've built in the K League with Jeonbuk."

Jeonbuk presented Morais, the first foreign head coach in club history, with a commemorative plaque and a gift.

Morais' top assistant, Kim Sang-sik, has been mentioned as a likely candidate to succeed Morais. (Yonhap)