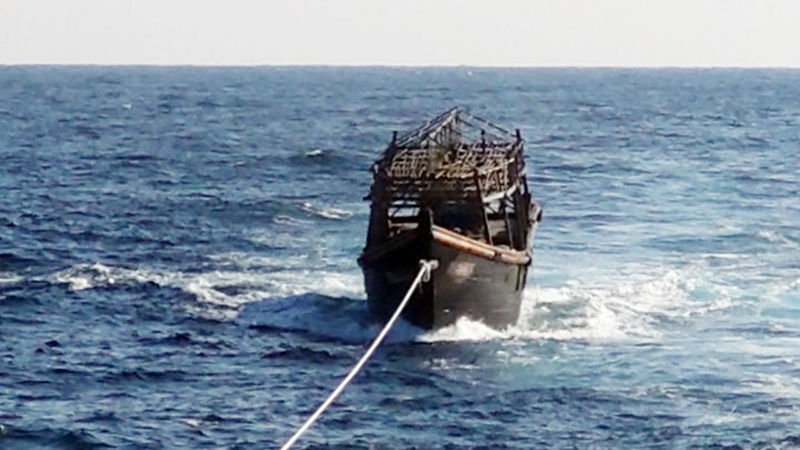 This file photo, provided by the unification ministry, shows a North Korean fishing boat being towed by a South Korean ship. The boat was returned to the North on Nov. 8, 2019, a day after Seoul deported two North Koreans accused of killing 16 fellow crew members. (Ministry of Unification)
The two fishermen confessed to killing 16 fellow crew members and expressed a desire to defect, but South Korean authorities dismissed their intentions as insincere. It was the first deportation of North Koreans since the 1950-53 Korean War.

The lawyers' group, which claims the deportation is a violation of the North Koreans' human rights, started the litigation after the NSO and the NPA dismissed its request for the disclosure of all relevant data, including their written statements and letters of intent of defection.

At that time, the government offices reportedly said the information on the deported North Korean fishermen is related to national security, defense, unification and foreign diplomatic affairs, and its disclosure might gravely undermine national interests.

Siding with the government offices, the Seoul court said the deportation-related information is classified as confidential and subject to non-disclosure under the Official Information Disclosure Act.

The Seoul Administrative Court has made the ruling in a lawsuit launched by a group of conservative lawyers to demand that Cheong Wa Dae's National Security Office (NSO) and the National Police Agency (NPA) disclose all information on two North Korean fishermen who were sent back to the North in November last year after being captured near the eastern inter-Korean sea boarder. (Yonhap)