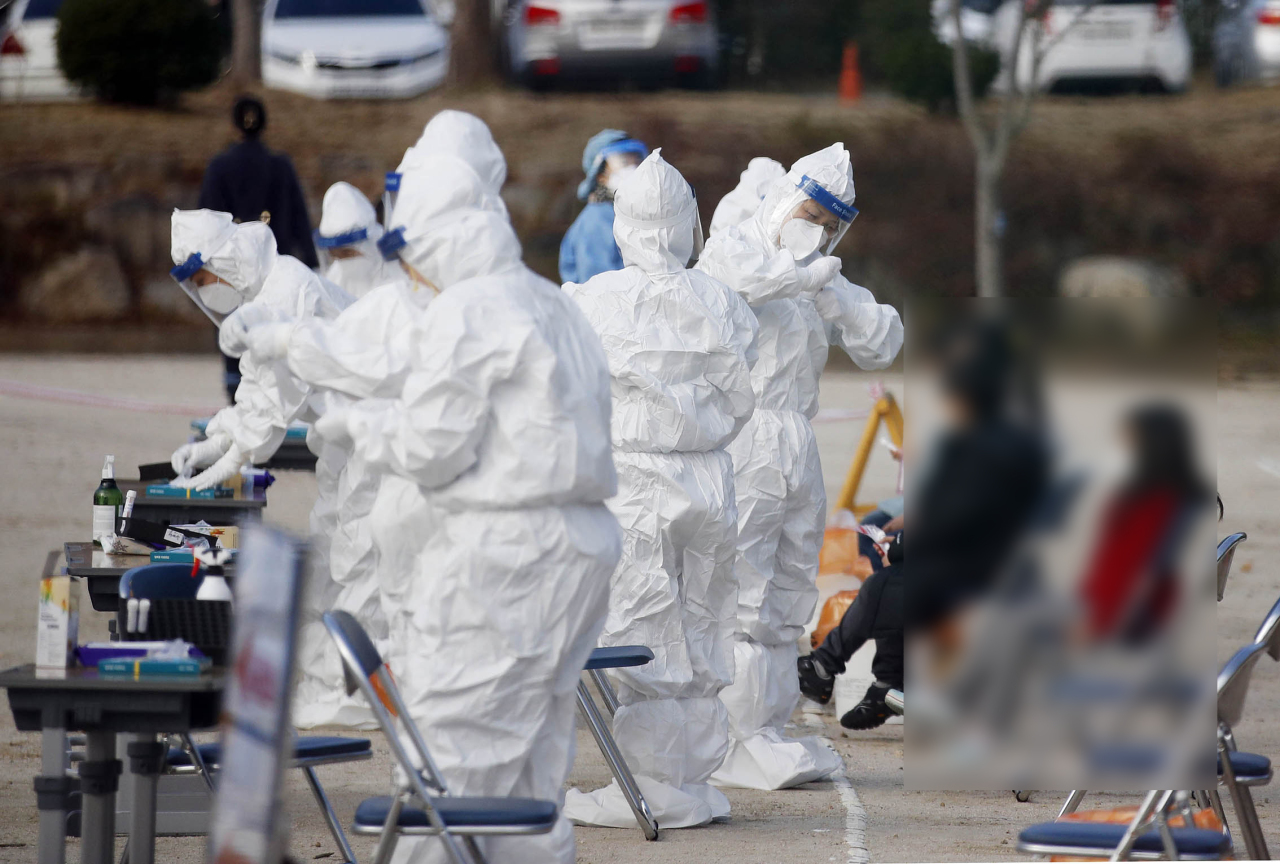 Health workers take nasal swabs from children at an elementary school in Gwangju, South Jeolla Province, after two people at the school tested positive for the coronavirus. (Yonhap)
A young, previously healthy person who caught and recovered from COVID-19 was infected again with a different strain of the pathogen, a recent study in South Korea shows.

A 21-year-old woman who had been admitted to a hospital with mild COVID-19 symptoms in Seoul in March tested positive again in April, six days after being discharged on March 30, according to the study published in the journal Clinical Infectious Diseases. She was screened again after she reported a cough that kept getting worse.

The study proved she had been reinfected with a different viral strain rather than the coronavirus remaining in her body from the initial infection, after researchers conducted whole-genome sequencing -- which is used to identify genetic variations -- of clinical specimens on both occasions.

The patient experienced mild symptoms such as a cough and sore throat in both episodes. Throughout her hospital stays, her vital signs were stable and her chest scans showed no abnormal findings.

The study suggested that reinfection with a genetically distinct strain of the coronavirus may occur in a patient with normal immune responses shortly after recovery from mild COVID-19.

One of the study’s co-authors, Dr. Seong Moon-woo, who is a laboratory medicine specialist at Seoul National University Hospital, told The Korea Herald that the findings indicate a COVID-19 infection “may not protect against a second infection.”

“This goes to show getting reinfected may be possible even after developing neutralizing antibodies,” he said, although he added that such reinfections were likely to be very rare occurences.

The study concluded that while the majority of patients with mild COVID-19 are capable of developing neutralizing antibodies against the coronavirus, whether these antibodies can “neutralize every clade of the coronavirus and guarantee immunity to subsequent infection with these mutated viruses” remains to be determined.

In a press briefing held Thursday afternoon, officials at the Korea Disease Control and Prevention Agency said the April case was the only known case of COVID-19 reinfection here so far.

The study, citing an April report, said at least 116 patients returned a second positive result after recovery from COVID-19 in Korea. Health officials had explained at the time that the positive retests were due to “the highly sensitive PCR assays picking up remnants of the dead virus.”

“We don’t know yet if the possibility of reinfection means a vaccine would be rendered ineffective,” said a senior official at the public health agency.