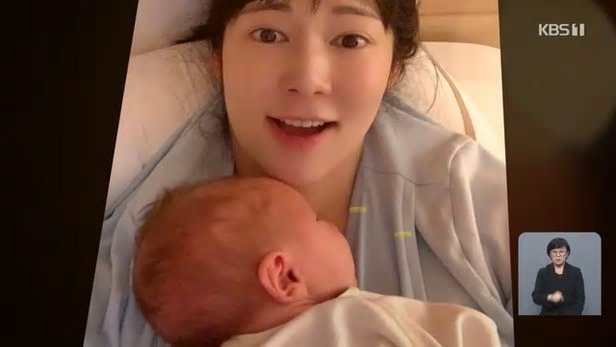 This screen shot image shows Sayuri Fujita having an interview with broadcaster KBS. (KBS)
A Japanese television personality in South Korea, who became a single mother by choice with the help of donor sperm, shed light on the country’s severe access restrictions to assisted reproductive technologies.

Sayuri Fujita gave birth to a son Nov. 4 after using donor sperm for in vitro fertilization treatment in Japan, after her doctor said spontaneous pregnancy was becoming less and less likely because of her age.

Although she was near the end of her fertility, she wasn’t willing to get married to someone she didn’t love in pursuit of motherhood.

As unmarried women in Korea are largely barred from receiving fertility treatment, she flew back to Japan to undergo the procedure.

“In Korea, only married people are allowed to do in vitro fertilization. Everything was illegal (for me to try). I hope that the country recognizes the right to have children,” Fujita said during an interview with broadcaster KBS on Monday.

The remarks drew fresh attention to the legal requirements surrounding sperm donation in the country, where the birth rate remains low and an increasing number of young adults are choosing to stay single.

It is practically illegal for a single woman to become a single mother through sperm donation here. Under the Bioethics and Safety Act, recipients need consent from their legal spouses.

Receiving donor sperm is only allowed in cases where the husband is sterile or has a serious genetic disease.

The time has come for the country to lift the restrictions and allow single women to make the call, according to Park Nam-cheol, president of the Korea Institute for Public Sperm Bank.

“Unmarried women should be supported in legal and medical ways when they make their own decision to take a chance to give birth,” he said during an interview with CBS on Wednesday.

Park said many OECD countries have permitted unmarried women to undergo fertility treatment with donated sperm for over 30 years.

“The reason why intrauterine insemination with donated semen is allowed in these developed countries is that the choice of pregnancy and childbirth is a matter of individuals, not something a country or society can force (someone) to do or not do,” he said.

“So they see a country has an obligation to provide quality sperm to married infertile couples and single women.”

Politicians called for more support for motherhood without marriage and changes in negative perceptions toward them.

“We should work together for the Republic of Korea, where Sayuri’s child will be raised, to have a greater degree of openness,” said Han Jung-ae, chief policymaker of the ruling Democratic Party.

Kang Min-jin of the minor Justice Party proposed revising the Bioethics and Safety Act, saying it “belongs in the past” for not recognizing women’s right of self-determination.

“The law contains a false perception that only childbirth within marriage can be treated as normal,” she said.