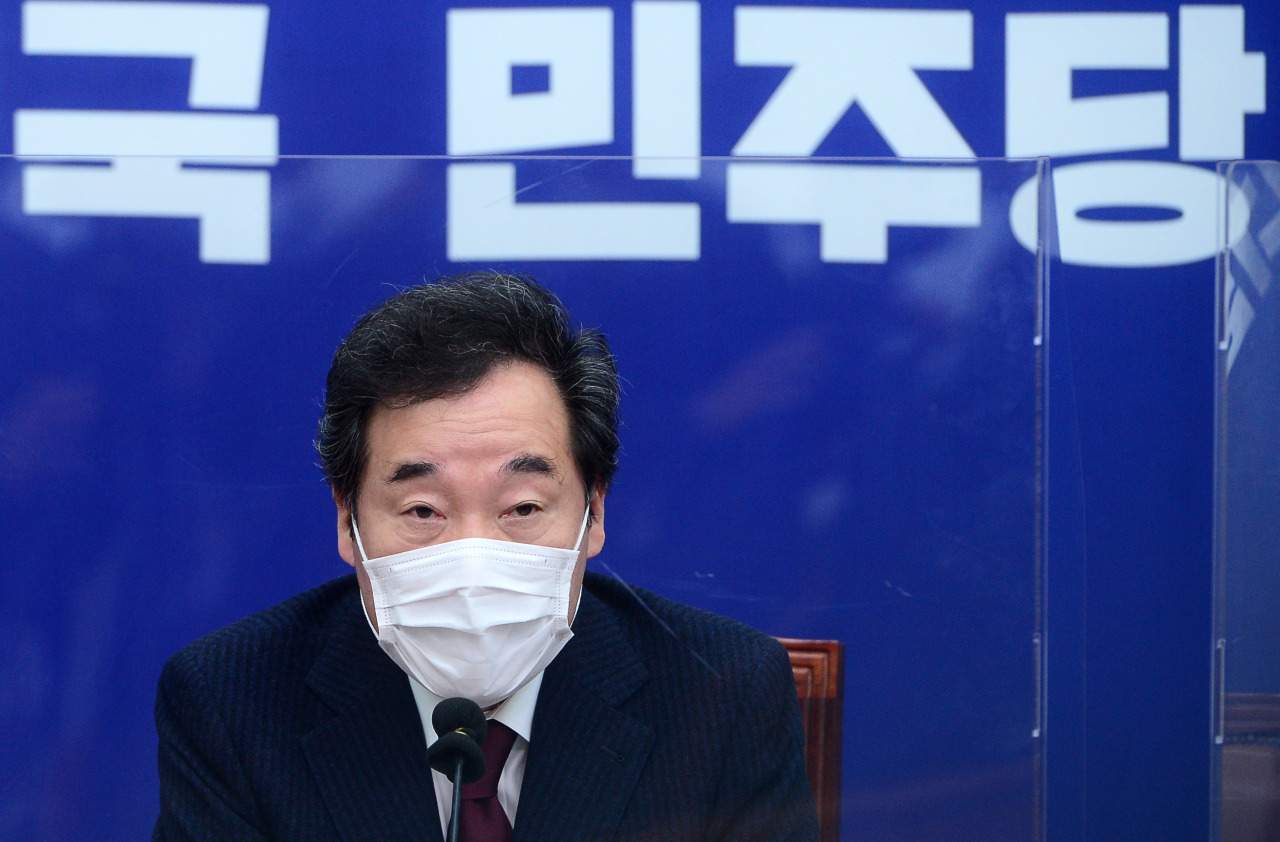 Rep. Lee Nak-yon, the chairman of Democratic Party, speaks at the party meeting on Friday. (Yonhap)
The ruling party chairman expressed hope Friday that a 2018 deal signed between North Korean leader Kim Jong-un and President Donald Trump will be retained under the incoming US administration under President-elect Joe Biden.

"I wish that South Korea and the US will work together to reactivate the Korean Peninsula peace process," Rep. Lee Nak-yon, the chairman of Democratic Party, said during a top party council meeting.

"The starting point for that will be the reaffirmation of the 2018 Singapore agreement between the US and North Korea," Lee said, referring to the joint statement signed by Kim and Trump during their first summit meeting that year.

"I wish that it could be maintained under the Biden administration," the party leader said.

In the statement, the two nations agreed to the establishment of "new relations," joint efforts to build a peace regime on the peninsula as well as effort on the North Korean side for the "complete denuclearization" of the peninsula.

No clear progress has been made, however, in the implementation of the Kim-Trump deal as working-level talks between the countries remain stalled.

"It is the first ever agreement in history forged between the leaders of North Korea and the US," Lee stressed.

"It has legitimacy and authority, and to its content the South and North Koreas and the US have all agreed," he added.

Lee's remarks followed the first phone call held between President Moon Jae-in and Biden on Thursday. The two reaffirmed their commitment to their countries' alliance and peace on the peninsula.

Democratic Party floor leader Rep. Kim Tae-nyeon, meanwhile, called for a summit between Moon and Japanese Prime Minister Yoshihide Suga within the year to seek a breakthrough in the protracted diplomatic dispute between Seoul and Tokyo.

"If a South Korea-Japan summit takes place this year, (the two leaders) could adopt a 2020 declaration marking a new epoch between the nations in which they seek to settle historical issues and establish a forward-looking relationship," said Kim.

Kim stated that an annual trilateral meeting among the South Korean, Japanese and Chinese leaders, which Seoul is planning to host this year, could serve as an opportune moment for the Moon-Suga summit.

The floor leader stressed the need for Tokyo to participate in the three-way summit without preconditions.

In a separate meeting with reporters, Lee said the leaders of South Korea and Japan should hold a summit to settle the pending issues, instead of waiting for lower-level negotiations to solve the problems.

South Korea and Japan have clashed over Tokyo's export curbs last year that are seen as political retaliation for Korean Supreme Court rulings in 2018 that ordered Japanese firms to compensate victims of forced labor during Japan's 1910-45 colonization of the Korean Peninsula.

"The relationship between South Korea and Japan needs to be improved before the launch of the Biden administration. It is desirable that President Moon and Prime Minister Suga persuade Biden in the same voice for the peace and prosperity of Northeast Asia," he added. (Yonhap)