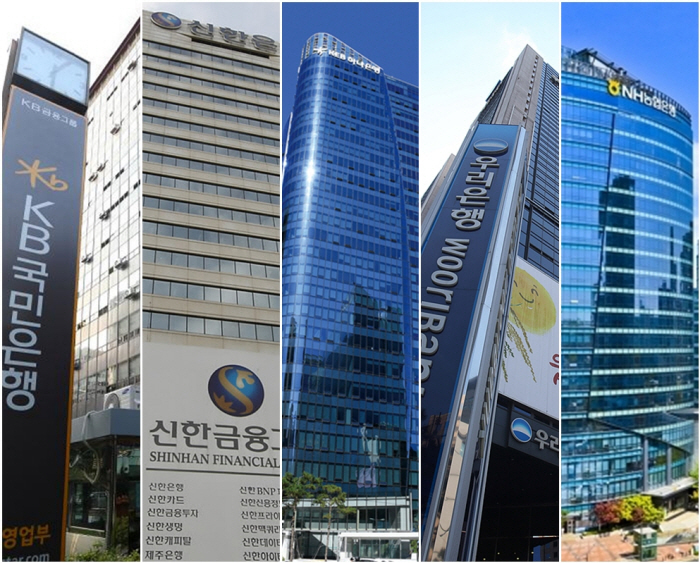 “There has been an increase in core interest revenues due to a growth in won-denominated loans and a narrow on-quarter decline of the banking groups’ net interest margins by 0.01 percentage point,” a recent note released by local brokerage BNK Securities said.

“Their brokerage units have contributed to the figures and the accumulated net profit for the fiscal 2020 is projected to reach a record-high of 3.5 trillion won ($3 billion), as the momentum is likely to continue onto the fourth-quarter,” it added.

KB Financial Group maintained its No.1 position as the highest quarterly net profit earner among its peers by posting 1.16 trillion won and gaining 24.1 percent on-year. It gained 18.8 percent from the previous quarter.

This marked the first time the duo saw its quarterly net profit surpass the 1 trillion won-mark.

Despite the celebratory mood, BNK’s note also indicates the financial “irony” prompted by COVID-19 pandemic here -– an increased demand for corporate and household loans from coronavirus woes coupled with a narrow decline in net interest margins have led to a robust interest revenue for banking groups.

All five flagship banking units under the major groups saw their accumulated won-denominated loans extended to customers by the third quarter this year increase noticeably. NH NongHyup Bank and KB Kookmin’s outstanding amount of such loans gained 9.9 percent and 8.7 percent to 232 trillion won and 292 trillion won on-year so far. The rest gained an average 7 percent as well, in the same period.

And while the banking giants may wish to maintain the momentum into next year, officials and onlookers alike have hinted concerns of facing increased stress from loan defaults.

Since earlier this year, major banks have allowed small- and medium-sized business owners and self-employed affected by the coronavirus to defer their loans or borrow under less strict conditions on government suggestion.

“We are strengthening the monitoring of our coronavirus loans as we cannot completely rule out the possibility of a spike in loan-loss provisions following the wrap-up of our COVID-19 financial support programs,” KB Financial Group’s Chief Financial Officer Kim Ki-hwan recently said Oct. 22, in a statement.