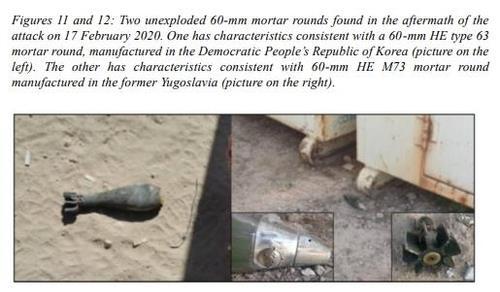 (Screenshot captured from the UN Website)
The al-Shabab Islamic extremist group used what appears to be a North Korean mortar in an apparent attack against the United Nations compound in Somalia earlier this year, a UN panel has said, in a sign of possible arms deals between the two sides.

The al-Qaida-linked group carried out six separate mortar attacks on the international airport in the Somalian capital, Mogadishu, between February and May.

One of the attacks involved four 60-mm mortar rounds that were fired in the direction of the UN compound within Aden Adde International Airport on Feb. 17, the UN Panel of Experts on Somalia said in a final report dated Sept. 28.

"Two unexploded 60-mm mortar rounds (were) found in the aftermath of the attack on 17 February 2020. One has characteristics consistent with a 60-mm HE type 63 mortar round, manufactured in the Democratic People's Republic of Korea," the panel said in a final report posted on the UN website, using North Korea's official name.

The development suggested that North Korea may have been involved in arms deals with al-Shabab extremists.

The report came weeks after North Korea renewed its opposition to terrorism.

"It is the consistent stance of the government of the DPRK to oppose terrorism in all its forms and manifestations and any support to it," an unidentified North Korean diplomat said in a UN session earlier in October.

In June, the US State Department said North Korea has failed to take action to address historical support for acts of international terrorism.

The United States first designated North Korea as a state sponsor of terrorism in 1988 for its 1987 bombing of a South Korean airliner that killed all 115 people aboard.

Washington removed Pyongyang from its list in 2008 in exchange for progress in denuclearization talks.

In 2017, the US redesignated North Korea as a state sponsor of terrorism after determining that the North Korean government "repeatedly" provided support for acts of international terrorism. (Yonhap)