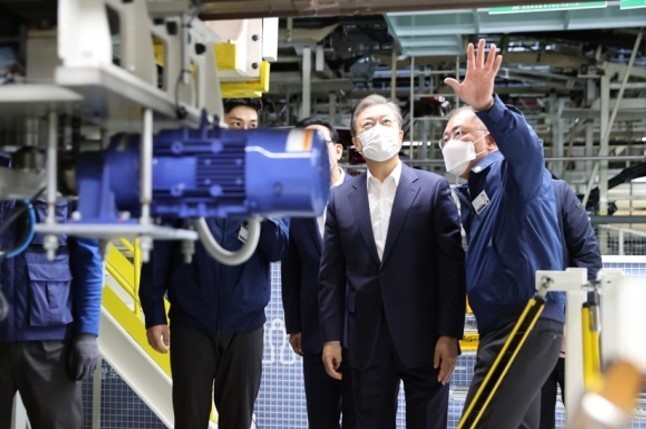 At the production sites, Moon reaffirmed the government’s plans to invest more than 20 trillion won ($17 billion) in green mobility areas such as electric and hydrogen cars, saying the global auto market will be rapidly reshaped around such cars and the nation must respond boldly and promptly to remain an automobile powerhouse.

He reiterated the nation’s plans to produce 1.13 million electric vehicles and 200,000 hydrogen cars by 2025, and to become the first country to commercialize Level 4 self-driving cars in 2027.

He also spoke highly of Ulsan City, saying it had led the nation in future cars and hydrogen cars.

“Ulsan City is leading the supply of hydrogen fueling stations and hydrogen vehicles, and helping companies innovate with a special hydrogen regulatory free zone,” he said.

After the event, Moon examined the future cars displayed inside and outside the venue with the ministers and the Hyundai Motor chairman.

Hyundai Motor’s Ulsan plant is the cradle of the South Korean automobile industry, where production of the Pony -- Korea’s first mass-produced car -- began. It produces 38.2 percent of the nation’s vehicles. Ioniq 5, which uses the world’s first EV-exclusive platform, E-GMP, will also be produced at the Ulsan plant from next year.

More than 100 people attended the event, representing the government, future car companies, consumers, students and related associations. In addition to Hyundai Motor, representatives of various industries were there, including the battery industry, small and medium-sized companies and startups related to electric, hydrogen and autonomous vehicles.