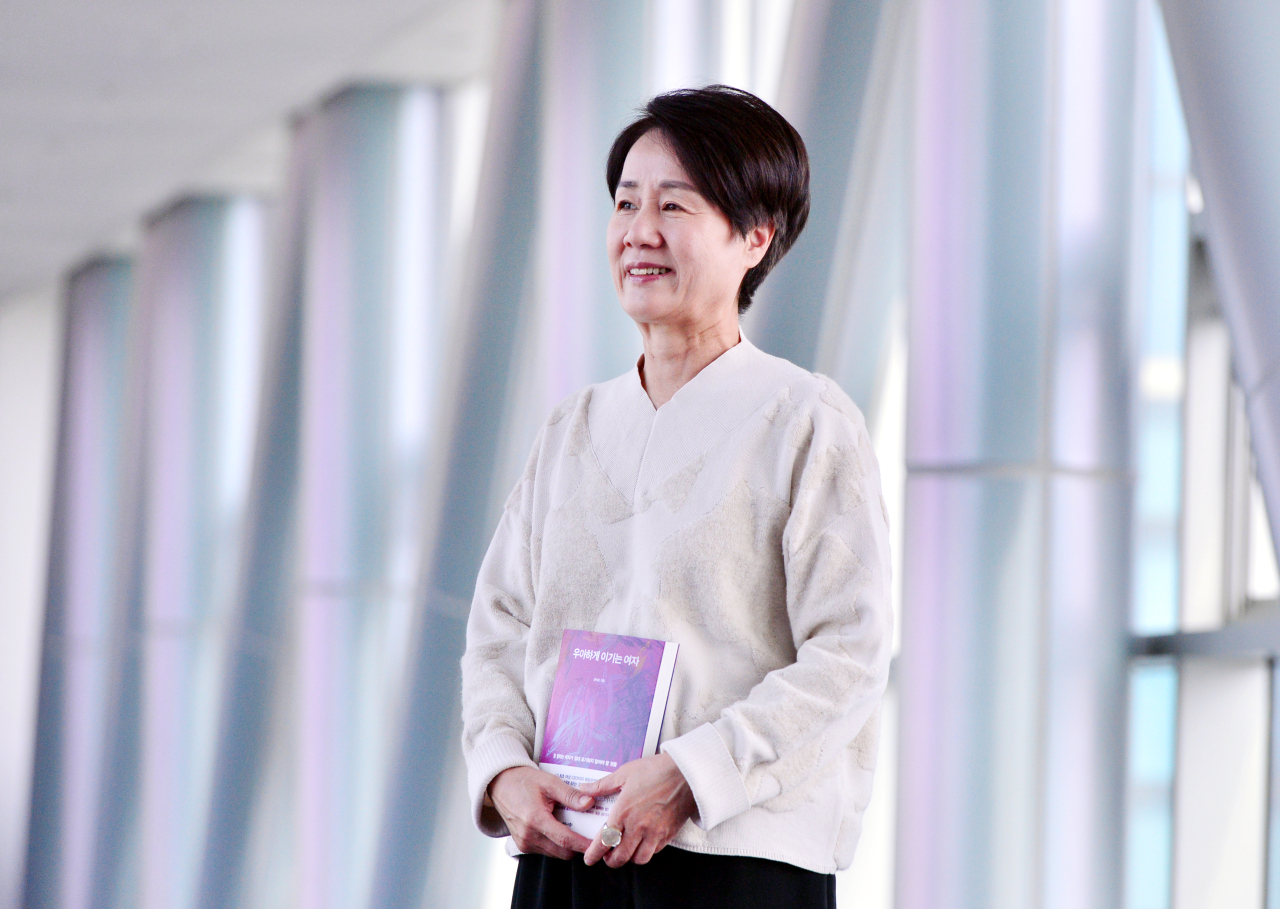 In fact, Yun was appointed executive director of LG Academy, LG Group’s human resources development center, in 2000, becoming the conglomerate’s first-ever female executive. She had joined the company five years earlier, at age 40. In 2010, she was made senior executive director at LG Academy and the following year, she was appointed CEO of LG Arts Center, a cultural institution recognized for its innovative programming.

“There really was not much to smile, laugh about,” she said before the interview with The Korea Herald on Oct. 13, explaining to the photographer that she is often captured looking stern because that is the face that she wore as an executive. There was always work, work, work, she recalled.

Our conversation naturally starts with her late mother, who passed away just after Chuseok. “It was my good fortune that I had my mother for a mom. I am proud of it,” she said. Like many Koreans of her age, the life of Yun’s mother was “very dramatic.”

The 1950-53 Korean War changed everything for Yun’s family. Once a wealthy family from Jangdan in North Korea, they fled to the South with very little. Yun’s father passed away at 34 and Yun’s mother, a young widow with three girls, had to find a way to support the family. She eventually found a position as one of the country’s first batch of school nurses.

“I have tremendous respect for my mother. She lived her life with all of her being,” Yun said. She taught by example to be industrious and to do one’s best, Yun recalled. Those qualities are in her own DNA, Yun said, qualities that made her a trailblazer, setting a new path for the women who would come after her.

Yun’s career and life did not pan out quite as she had designed. She had not planned on getting a Ph.D. in educational technology from Iowa State University when she accompanied her husband to the US. It was her husband who was the one pursuing a doctorate.

After returning to Korea, she looked for a university teaching position. When she was offered a job at LG Academy, she declined it for two months, believing she was bound for academia. But eventually she said yes, struck by the idea that, in the business world, “one must see to the end what one has started and assume responsibility for the results.”

And then she was unstoppable.

“I was able to grow greatly, I became the first woman executive and I was able to build my own brand,” she said of her years at LG.

She counts among her high moments the successful implementation of programs that she developed, not per order from above but on her own initiative. It was after her retirement, when she had time for reflection, that she realized she liked the satisfaction from work well done more than her title.

Of course, there were low moments, too.

“I always felt lonely,” she said.

“But that did not discourage me. I decided to approach them first,” she said.
“I was able to overcome these (obstacles) because I was the first woman executive,” she said. As the first woman executive at LG Group, she felt men’s eyes watching her every move. At the same time, she knew that other women at the company were also watching her, following in her path. “These all contributed to my growth,” Yun said.

Being a pioneer came with responsibilities. She felt the constant pressure to do “really well.” “I could never be light,” she said. In a male-dominated business environment, she did not want to seem like a lightweight.

“I was very sensitive about being a woman,” she said. “It took a while for me to realize that maybe they (men) wanted to be approached first.”

Yun cites her boss, LG Group Chairman Koo Bon-moo, as her mentor. The powerful businessman’s humility left a deep impression on her.

“He was really down to earth. He personified what authentic humility is,” she said.

Koo also showed her how to work in an organization.

“I learnt about objectivity from him. Not to feel victimized and to not respond emotionally,” she said.

When Yun retired, she took up the caretaker role for her increasingly frail mother, just as her mother had taken care of her young daughter when she was a busy executive. And then she turned to coaching.

Numerous thoughts passed through her mind as she reflected on her career. “I began to see people and I felt sorry and humbled,” she said. “I realized that for me, work had come first.”

Being able to help others was an incentive for pursuing coaching certification. “I returned to HR with coaching,” she said, explaining how coaching is about moving people’s hearts. She is now a partner coach at the Coaching Management Institute.

“You can change a life with a word,” she said.

The ultimate goal of coaching is to help people find the answer themselves, she explained.

“It is not about giving you an answer,” she said. “It is about prodding you on, helping you reach that ‘aha’ moment.”

While everyone can benefit from coaching, Yun would especially like to help young people. She wants to tell the kids, “You can do it!”

As for the growing generation gap and the frustrations expressed by both the millennial employees and their bosses, Yun advises the older generation to accept the differences. “Recognize the individual. This is what the millennials are requesting.”

“Don’t be afraid of them, embrace them. Problems arise because we are not approaching them (millennials) with sincerity,” Yun said.

As the first woman executive at a major conglomerate, Yun is especially concerned about the status of women in the workplace. Noting that women account for a mere 3 percent of all executives in Korea, Yun said that is nowhere near enough.

“There is strong resistance to a quota for women, but I believe it must be more strongly institutionalized,” she said. “The society is still not a level playing field. One should not say (a women’s quota) is reverse discrimination.”

“This must be done if we are to build a better world,” she said.

As for her new book, “Winning Gracefully,” Yun said, “I wanted to share what I have now come to realize, and I tried to move people’s hearts with the book.”

Tips on how to win gracefully

Although Yoon Yuh-soon’s book is not intended to be a self-help book, “Winning Gracefully” contains nuggets of wisdom accrued from more than 18 years as a trailblazing female executive in the male-dominated Korean corporate world.

Here are some tips found in the book that apply equally to men and women:

1. Changes do not happen all at once

2. Beginning and end are just points in an ongoing process

3. Keep emotions under control; do not respond immediately

4. Focus on what you already have

5. All possibilities begin with believing in yourself

6. Learn to ‘read’ your organization

7. Focus on the essence of the work

9. A leader’s power stems from sincerity

10. You can do it because you are you
By Kim Hoo-ran (khooran@heraldcorp.com)