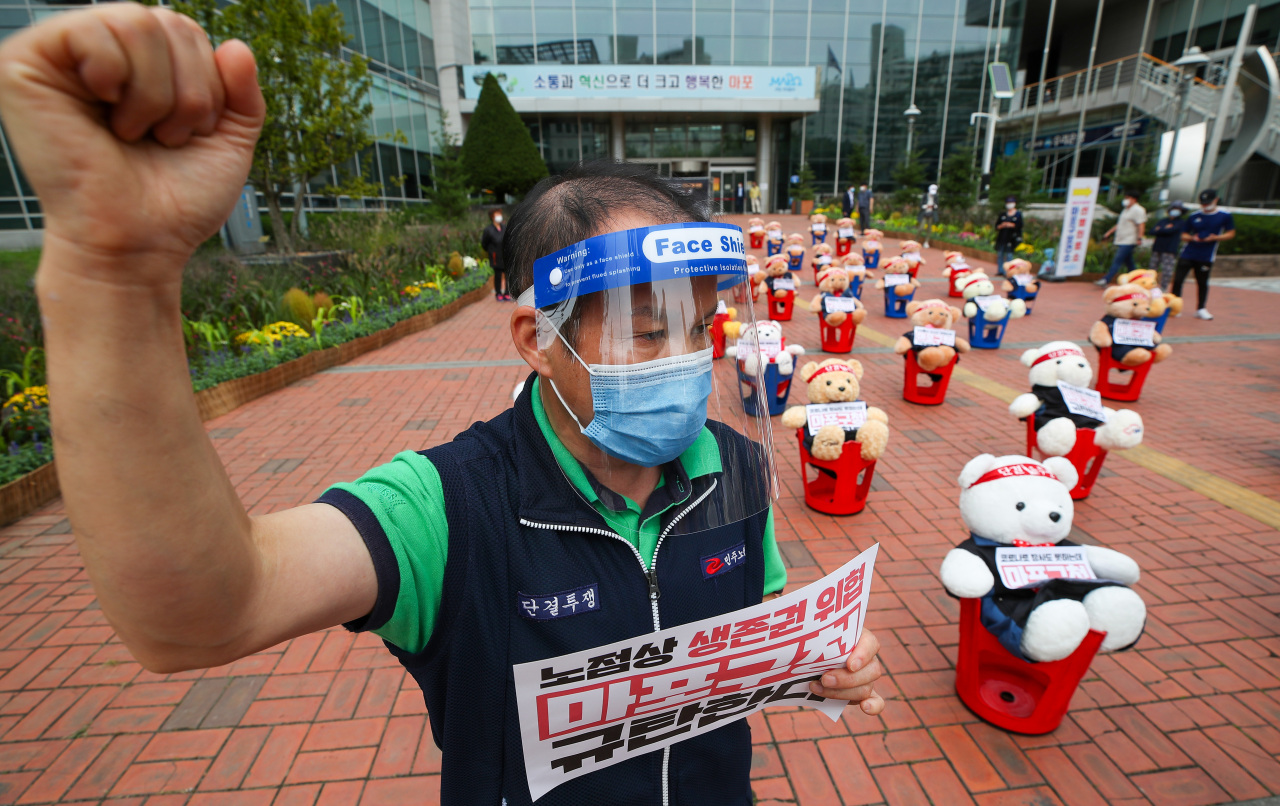 A labor union holds a rally using stuffed animals on Sept. 17 outside the Mapo-gu district office in Seoul to protest the city’s crackdown on street markets. (Yonhap)
Since the dawn of the novel coronavirus pandemic, governments around the world have limited activities and businesses based on how “essential” they are.

Mid-pandemic protests prompt fear that they could lead to a new outbreak of cases -- and with some justification. In Korea, a recent protest has been tied to a resurgence in summer, reversing reopening in the capital area. Protests during a pandemic raise a difficult question: Is there a time and place when protests should be stopped?

Korean authorities have actively discouraged protests. In a message ahead of Chuseok holidays, President Moon Jae-in said, “Antisocial crimes that endanger safety of communities should not be tolerated on the pretext of freedom of speech and assembly.”

After conservative groups said they would be staging a rally -- “peacefully, while complying with physical distancing” -- the first weekend of October, the Ministry of Health and Welfare said anyone who takes part in the rally, not just the organizers, could face punishment.

The Oct. 3 rally’s organizers argue it will be done safely, in a “drive-thru” format. Asked to explain in detail, one of the group’s leaders Soh Kyung-suk said up to nine cars bearing banners plan to drive through the Gwanghwamun boulevard.

Soh said they “fully understand the gravity of the coronavirus situation and intend to obey government orders.”

“If face masks are worn, hands are cleaned and other precautions are taken, while putting a meter or two distance between protesters, I don’t see why it would harbor contagion risks,” he said.

“But it is not our intention to create a cause for alarm for fellow Koreans. Physical contact will be eliminated, and people who are sick will be instructed to stay home and get tested.”

The National Police Agency said last week that police would either suspend or revoke the driver’s licenses of those participating in “drive-thru” protests. Civic groups have hit back at the decision since.

People’s Solidarity for Participatory Democracy said in a Monday statement that the police were responding with “excessive coercion.”

“The role of the police is to see that the drive-thru protesters follow physical distancing, and hold them accountable if violations occur,” the group said. “Public authorities cannot undermine basic principles of democracy in the name of disease control.”

Health experts say protests must proceed with “an abundance of caution.”

“It goes without saying no crowds should be involved. But if protesters are in separate vehicles and are just driving by, that is just as much of a risk as a regular car commute,” he said.

“People in close proximity to one another in any setting entails a possibility of transmission,” said pulmonologist Dr. Chun Eun-mi of western Seoul’s Ewha University Medical Center, warning against failures to socially distance not only during, but before and after protests.

In June, the World Health Organization’s director-general Tedros Adhanom Ghebreyesus advised all those protesting to “do so safely” -- “Clean your hands, cover your cough and wear a mask if you attend a protest.”

“No one is saying the right to assembly overrides public health. But there are other safety issues that are just as pressing as the coronavirus,” said the confederation’s official Han Sang-jin.

“Over 2,000 people are killed every year in workplace accidents, for instance. Not enough is being done to address these preventable industrial disasters.”

Han said people were coming up with ways to get their message across without gathering, and that these alternate forms of protests need to be allowed.

“Regardless of which side of the political aisle you stand on, if you take steps to avoid infecting others, it’s within your rights to demonstrate.”

A Seoul pub owner in his 30s said he would be “OK” with protests, on the condition coronavirus prevention steps are taken.

His pub, located in the city’s central Gwanghwamun area, the site of an anti-Moon administration protest in August, suffered a major blow from strict physical distancing measures put in place following the protest-linked surge in cases.

Still, he says he believes Koreans “should be able to exercise the lawful right to peacefully protest, so long as health guidelines are observed.”

“I may not necessarily agree with (the protesters), but I expect Korea to be a country where people are free to voice dissent and openly express political views,” he said.

A 30-something Gwanghwamun commuter, who is a Gyeonggi Province resident, said “some protests can be justified” even in the midst of the pandemic, while stressing, he doesn’t want to “come across as a sympathizer.”

“Protests have become a taboo subject after what happened in August, but I don’t think they should be prohibited entirely,” he said. “Not all protests are the same. They vary in methods, goals, causes.”

He also said he wonders “if socially distanced protests done outdoors are riskier than other everyday activities -- like dining at a restaurant, public transit rides during rush hours or air travel to Jeju.”

Sociologist Shin Jin-wook of Chung-Ang University said, “No freedom is absolute. One is free only to the extent that freedom and rights of others are respected. But this is not to say that safety outweighs all sorts of freedom.”

A delicate balance can be found for two competing values to coexist, he said.

“If the pandemic is going to last years, there have to be creative ways for people to demonstrate, and I mean for society’s most vulnerable for whom demonstrations may be their sole medium to get heard.”

Another sociologist Chun Sang-chin of Sogang University said health and life were understandably the main priorities in a pandemic. “Korea avoided lockdown because the majority of citizens were willing to put up with certain degrees of restrictions to individual liberties,” he said.

“The country’s success in eschewing draconian measures that were taken in advanced democracies lies in the collective sacrifices. But then again, I think an acceptable compromise can be reached.”

Transnational historian Lim Jie-hyun of Research Institute of Comparative History and Culture said the debate over the right to assembly during a pandemic comes down to the question of “how to have democracy in an emergency.”

“History shows versions of authoritarianism were democratically instituted in emergencies -- whether it be a medical emergency or a national security emergency,” he said.

Lim said every exception made in an emergency context has to be based on social consensus.

“As we navigate through the treacherous coronavirus waters, a key debate is how far we can condone government controls in a crisis situation.”