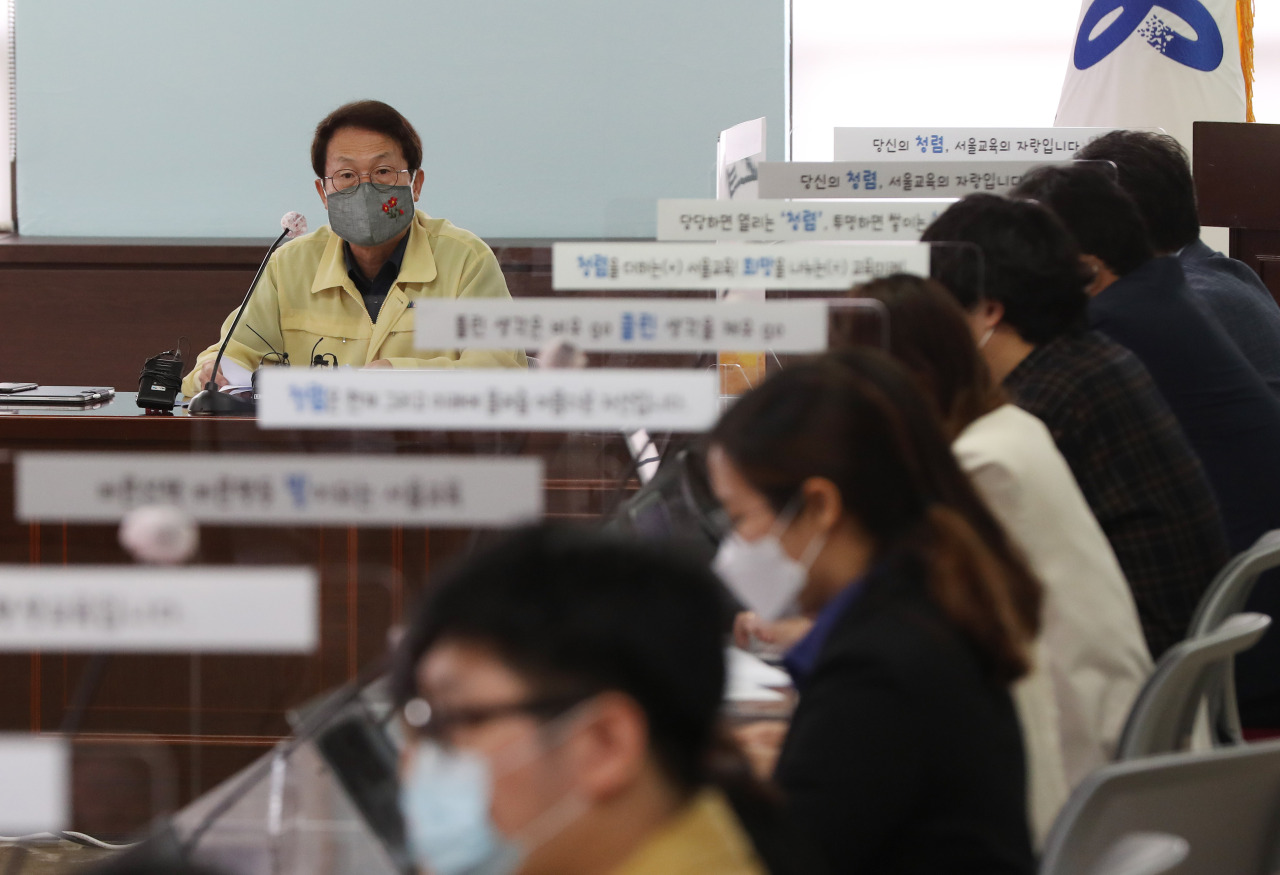 Seoul Metropolitan Office of Education Superintendent Cho Hee-yeon speaks during a press briefing Wednesday. (Yonhap)
The Ministry of Education isn’t replying right away, after the Seoul City education chief suggested that first grade elementary and middle school students be allowed back into classrooms full-time. Instead, the ministry is waiting until the end of the Chuseok holiday to make a decision.

An Education Ministry official said in a closed briefing with reporters Thursday that the ministry respects the Seoul Metropolitan Office of Education’s request but is unwilling to rush any decision on the proportions of in-person classes for certain groups of students.

“We will have to monitor the number of new virus cases after the Chuseok holiday and how the Central Disaster and Safety Countermeasure Headquarters adjusts the social distancing level,” the official said.

Seoul Metropolitan Office of Education Superintendent Cho Hee-yeon said in a press briefing Wednesday that he intends to discuss the possibility of having first grade elementary school students and first grade middle school students attend all their classes in person starting Oct. 12.

Allowing them to do so -- as an exception to the restrictions set to take effect Monday throughout Greater Seoul -- would minimize the risk of those students falling behind on achievements and learning, he argued.

Starting Monday, kindergartens and elementary and middle schools in Seoul, Incheon and Gyeonggi Province will keep attendance levels in all classes to one-third. High schools will keep the rate at two-thirds until Oct. 11, except for seniors.

Even during school closure, senior students are attending classes in person with no attendance cap in consideration of the college admission process -- in particular, the national college entrance exam in early December.

Unlike those in the capital region, schools elsewhere have stayed open and they can now set their own physical attendance levels as needed, depending on the virus situation in their respective regions.

Addressing opposition from teacher associations that say the ministry is imposing unrealistic requirements for online classes, the Education Ministry official said the government has listened to the wishes of students and parents in making such decisions.

Some students and parents have said the requirements do not go far enough, the official added.

Mindful of worries that distance learning is widening the achievement gap among students, the ministry imposed a requirement that all teachers hold live online sessions with students before and after each class day.

Teachers are also required to communicate directly with absentee students and engage in further conversations. If a student misses in-person classes for a whole week, the teacher is required to hold a counseling session with that student or a parent.

Some teachers’ groups opposed the ministry’s decision, saying the ministry should not interfere with the basic freedom that teachers have to run their classes as they see fit. They said more infrastructural support is needed before they can follow the guidelines.