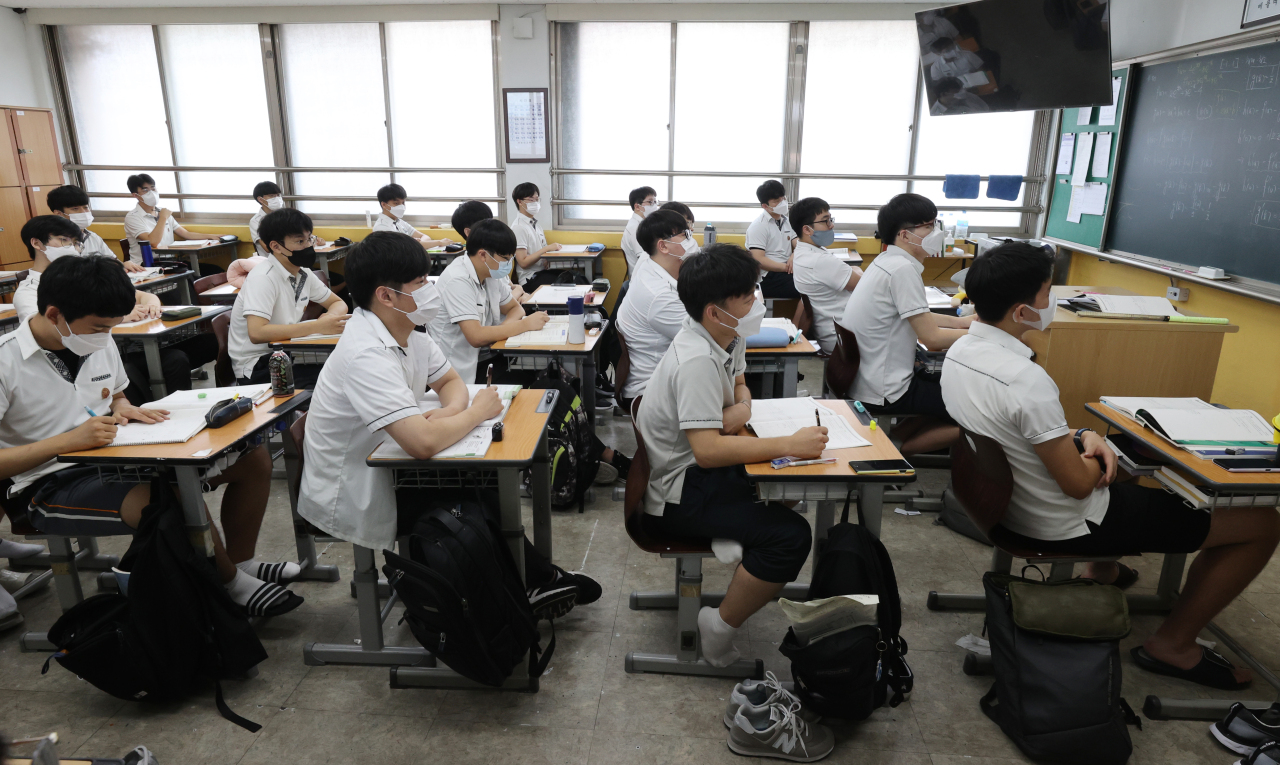 Third-year high school students in Gwangju attend a class on Aug. 24, a day before the 100-day countdown to the Dec. 3 Suneung began. (Yonhap)
The final year in high school has always been tough for Korean students. But it is harder than ever this year thanks to the coronavirus outbreak and the disruptions it has caused in almost every aspect of life.

The virus has forced schools to close for months and already caused the national college entrance exam date to be postponed once. And last week, with just three weeks left before the application opens, over 100 colleges announced revisions to admission rules in a bid to reduce the risk of virus infections.

Amid confusion and anxiety, high school seniors and other college hopefuls are struggling to stay focused on the exam. It is an exam they have been preparing for their entire teenage years, the outcome of which will not only determine whether they will go to university, but can shape every aspect of their lives.

“It has been really hard to solely concentrate on studying this year, and nothing has helped so far,” said Shin Dong-yeon, a final year student attending a high school in Gunpo, Gyeonggi Province.

“The situation was changing so often, and I never could figure out where I would be and what I would be allowed to do the next day. I had no choice but to just live with it,” said the 18-year-old, who wants to become a sports marketer in the future.

Following the first peak of COVID-19 infections in February and March, South Korea saw a sharp rise in infections in August, mostly in Seoul and the surrounding Gyeonggi Province. That prompted another closure of schools and kindergartens in the capital area until mid-September.

High school seniors, however, were given exemptions.

Shin, like his peers in other parts of the country, continues to put on his uniform and a face mask to spend nine hours at school. He said his friends are being extremely careful to avoid catching the coronavirus. That means no unnecessary talking, no taking off their masks unless eating or drinking and frequently using hand sanitizers, among other things.

“Since (last month’s) social distancing scheme was hiked to Level 2.5, I see a lot more of my classmates closely following the sanitary guidelines,” Shin added. “But (we don’t feel) completely safe from the virus at school.”

According to government data, 415 students had been confirmed positive for the novel coronavirus as of the end of last month. High school students accounted for more than a quarter of those cases, although no detailed breakdown was available to show how many were in their final year.

Catching the virus is students’ biggest fear, not just because of the disease itself, but for its impact on their chances in competing in the university admissions process.

“Think about what the virus can do. You would be forced to be secluded from others and preparing for the (national college entrance exam) Suneung won’t be so easy while being infected with the virus.”

As Park says, the problem is more with preparation plans thrown into turmoil from catching the virus or being suspected of carrying the coronavirus. That itself would cause great changes to much of the day-to-day study plans organized for the Dec. 3 exam day.

Shin agreed, “Being sick (at this final stage) is an immense disadvantage. I obviously have fears.”

The Education Ministry previously announced that it will ensure no student is left behind in taking the yearly College Scholastic Ability Test. Students infected with the virus will be able to take the test in hospitals or at other designated facilities.

Those in quarantine will be allowed to travel by car or ambulance to take the exam at separate, designated testing sites. The government will unveil detailed guidelines for the exam administration in the coming weeks.

Whether individual colleges will be able to roll out such measures is still up in the air. The Suneung is a big part of the admission process, but universities run interviews and auditions to screen applicants.

“It seemed like the virus situation has been settling compared to a few weeks ago, but we never know how bad the situation will be next month,” said a high school senior in Gangnam-gu, southern Seoul, who asked to go by the name Hwang Na-young.

“And that is what I fear most. No matter how much effort I put into preventing the virus from getting into my body, it could eventually reach me and mess up my plan for the next year, four years later and even more.”

Some students prefer online classes for that reason. They believe school is almost complete with everything that is factored into the college admission process, so there is no need to stick to in-person classes.

Most Korean colleges evaluate individual students based on their grades, attendance and extracurricular activities until the end of the first semester of the final year. There are a few colleges though that take into account second semester results.

Hwang used to take additional classes at cram schools until 10 p.m. on weekdays and spend every weekend at study cafes until July. After shutdown during the first COVID-19 peak earlier this year, private academies and study cafes were back in business and even bustling with exam students, but that is no longer the case.

Social distancing guidelines has been enhanced to Level 2.5, which amounts to a partial shutdown in Seoul, Incheon and Gyeonggi Province as a second wave of infections struck. Students in other regions also felt endangered, reluctantly altering their study plans and diverting back to their homes as much as possible.

“I was attending a study cafe nearby every day after school, but that has changed since the situation started getting worse,” said Choi Jun-hyeok, a high school senior at a high school in Daegu.

“Daegu is not included in this Level 2.5 scheme, but my parents were concerned of me visiting such public facilities, so I am now trying to continue preparing for the Suneung at home.”

Choi felt deprived of a quiet place to study, among many things he and his family lost from the coronavirus outbreak.

Since the virus situation got worse, Choi’s family have been staying home as much as possible. Dining out, going to malls or even trying out a new flavored ice cream have all become unaffordable luxury.

“Like any exam preparer, I am undergoing immense psychological pressure confronting the first important test of my lifetime,” he added. “I am just enduring every day with a focus on finishing the Suneung without any regrets.”

But those preparing to advance into college as athletics, music or arts majors are in a worse situation, Choi added. His friends have been barred from attending gymnasiums or athletic facilities due to the outbreak, and that has limited those college hopefuls to stick with push-ups and sit-ups in their tiny rooms.

Some students believe the impact of the coronavirus outbreak has been unequal, putting those still in school at a disadvantage against graduate competitors in university admissions.

“This year’s Suneung is the first try for high school seniors, so it was a challenge to respond well to an unprecedented situation like this,” said Kim Min-soo, a senior at Jeolla High School in Jeonju, North Jeolla Province, who wishes that the CSAT could be pushed back for another four months.

“But repeaters are on top of their stuff. They have done this before and know how to prepare. I don’t know how to compete against that group.”