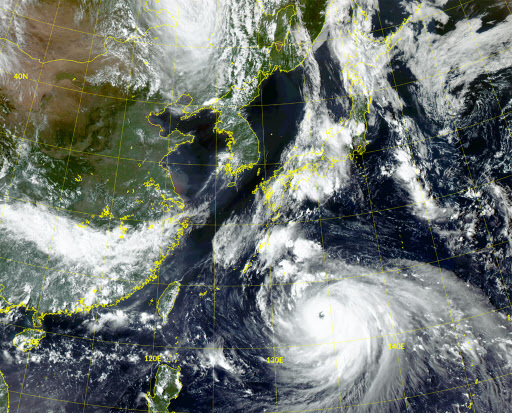 Typhoon Haishen is veering toward Japan and is unlikely to make landfall in South Korea, the weather agency said Saturday.

Currently packing top winds of 53 meters per second and with a central atmospheric pressure of 920 hectopascals, Haishen is stronger than typhoons Maysak and Bavi, which struck the country between late August and this week. It has been recognized as a super typhoon by the US Joint Typhoon Warning Center.

On the Korea Meteorological Administration's five-point scale, Haishen is currently “very strong,” the fourth-highest category on the scale, but is projected to intensify Saturday afternoon and become “super strong.” Super strong is a new category introduced in May for typhoons with top winds exceeding 54 meters per second.

The weather agency had earlier projected a trek right through the peninsula for Haishen, saying it would make landfall on the southern coast Monday afternoon.

“Passing through Japan and approaching Korea, the typhoon could weaken to somewhere between “super strong” and “very strong,” the KMA said.

“Still, the entire Korean territory will be under its influence. The eastern areas, which will be closest to the typhoon’s eye, should make thorough preparations,” it added.

As of 9 a.m. Saturday, Haishen was about 510 kilometers southeast of Okinawa, Japan, traveling northwest at a speed of 15 kilometers per hour. It is forecast to hit the Japanese island of Kyushu on Sunday or Monday at close to its full intensity.