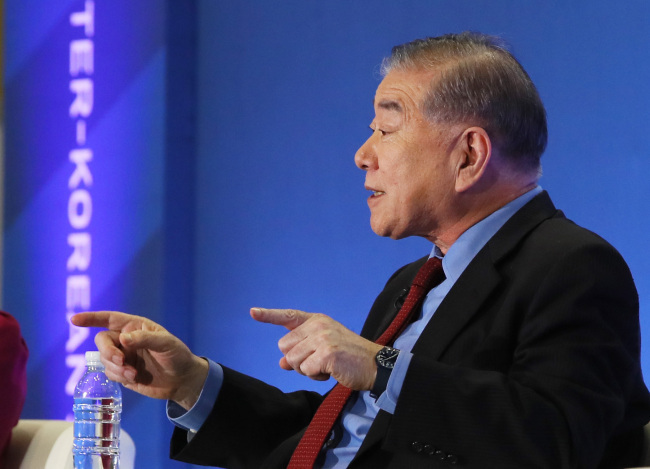 Moon Chung-in, special adviser for diplomatic and security affairs.(Yonhap)
SEOUL (Yonhap) --A special security adviser to President Moon Jae-in on Friday suggested reviving the six-party talks on North Korea's nuclear program in the form of a six-way summit, saying the issue is not a matter only between Washington and Pyongyang.

Moon Chung-in, special adviser for diplomatic and security affairs, made the remark during a security forum hosted by the Korea Institute for National Unification, stressing the importance of a "top-down approach" in efforts to resolve the issue.

"We need to revise the six-party talks that we failed in the past and we need to hold a 'six-party security summit' so that the leaders can discuss the issue of security and come up with an agreement on common security," he said.

"This way, we can solve the North Korean nuclear issue and materialize cooperative security," he added.

Moon pointed said "the North Korean nuclear issue cannot be simply solved by improving U.S.-North Korea relations as asserted by Pyongyang" and called for a meeting of leaders from six countries -- the two Koreas, U.S., China, Japan and Russia.

Moon said that the U.S. is well aware that it can provide Pyongyang with regime security or sanctions relief but that it cannot provide economic or energy-related support. He said that cooperation from other countries, like China and Japan, is necessary in such areas.

Nuclear negotiations between Washington and Pyongyang remain stalled after the early 2019 summit in Hanoi between the two leaders ended without a deal. The two sides were far apart over how far Pyongyang should denuclearize in order for Washington to offer concessions.