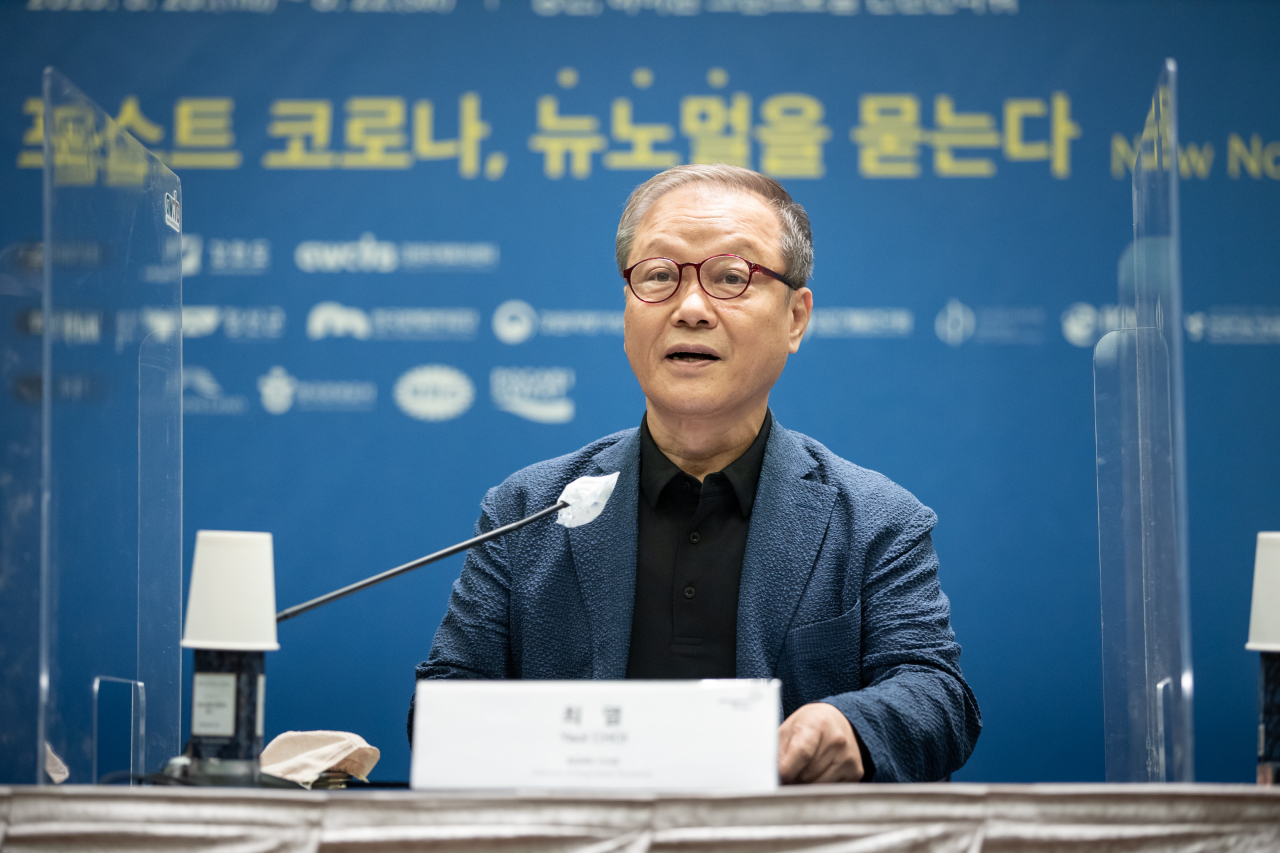 Choi Yul, chairman of Korea Green Foundation, talks during a press conference on Aug. 20. (Gangwon Province)
The Leonardo DiCaprio environmental movie awards are one of Choi Yeol’s current ambitions. As a prominent South Korean environmental activist who leads the Environment Foundation, Choi, who is a big believer of cultural ripple effects, has already carried out several movie events and exhibitions to promote environmental awareness.

His interests in the cultural movement and international collaboration are not coincidental. He believes that climate change is the most pressing environmental issue, the fallout of which reaches beyond the scope of national borders and will necessitate international cooperation.

“Environmental issues usually take a back seat because people tend to marginalize problems they have never directly experienced, such as climate change or artificial intelligence,” Choi told The Korea Herald during the Jeongseon Forum earlier this month. “We should remember, however, that by 2030 we will have crossed the point of no return, if we don’t act now,” he noted.

Choi chaired the Jeongseon Forum 2020, an event held to acknowledge the second anniversary of the PyeongChang Winter Olympics, which focused, this year, on climate change and sustainable living.

Joengseon, a city in the Gangwon Province and one of the three cities featured in the PyeongChang Winter Olympics, used to be a thriving coal mining community in its heyday. With most coal mines closed, the young generation left the city to look for a job in bigger cities.

Since Choi started the Research Center for Air Pollution in 1988, which later became the Korean Federation for Environmental Movement, his environmental focus has shifted in line with each different environmental issue that Korea has faced. Back in the ‘’80s, the country’s rapid economic growth came at the expense of the environment and abuse of cheap labor.

Accordingly, Choi’s first focus was the impact of rapid industrialization on air and water pollution. From these origins, he went on to establish the Climate Change Center in 2008 and the Fine Dust Center in 2018.

Even though South Korea is still lagged behind developed countries in terms of environmental awareness, the country can provide an alternative for environmental future, Choi said. “South Korea has the opportunity to set a global example by shifting its industrial focus away from established technologies, and toward constructing an eco-city.”

“We can build an eco-friendly smart city in places like Jeongseon and export the models overseas, particularly to other Southeast Asian countries, which would solve both environmental and employment issues,” Choi added.