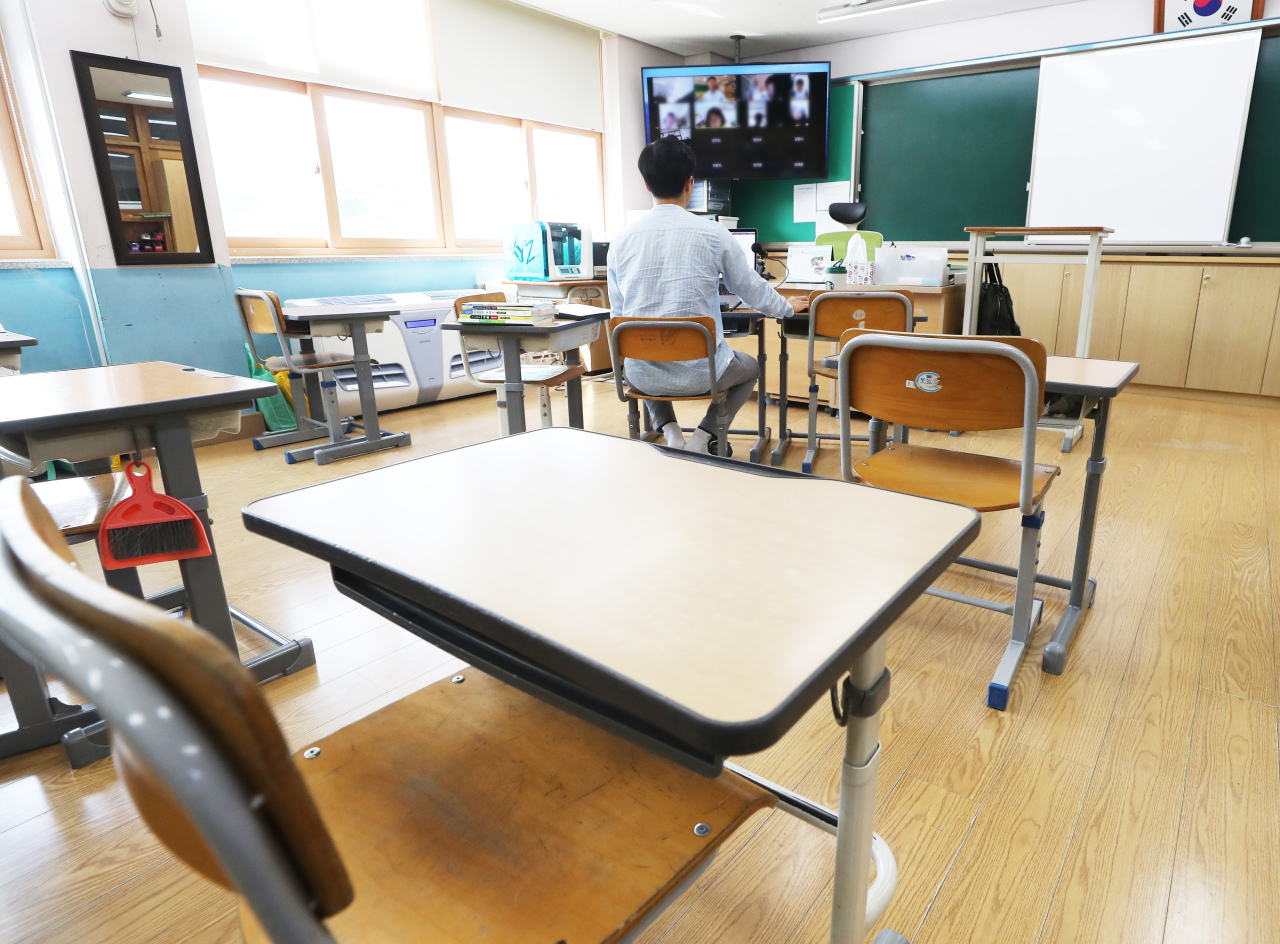 A teacher runs an online class Wednesday in an empty classroom of the Hanter Elementary School in Yongin, Gyeonggi Province. (Yonhap)
Seeing a stabilizing trend of new coronavirus cases in the past few months, many students, teachers and parents had hoped the coming second semester of the school year would be different. The first semester had been punctuated with weeks of closures followed by weeks of online-only classes and a mix of online and offline formats, with the former remaining the mainstay -- all because of the COVID-19 outbreak.

But with COVID-19 cases suddenly surging in the capital region, including dozens of cases involving students and school employees, it looks like online classes will be the norm again in the coming new semester. The start of the fall semester differs across cities and provinces, ranging from mid-August to early September.

After social distancing rules were toughened Wednesday, Seoul and Gyeonggi Province decided to restrict in-person attendance at kindergartens, elementary schools and middle schools to one-third and high schools to two-thirds. Other regions followed to limit in-person attendance of their schools to two-thirds. Many had planned on going 100 percent offline, as online classes were leading to a widening achievement gap among students.

Now, some 689 kindergartens and schools in Seoul, Busan, Ulsan, Gyeonggi Province and Gangwon Province are reforming their physical attendance plans for the new semester.

Worries are growing that by continuing distance learning without addressing problems exposed during the first semester, schools will face more challenges, while working parents will again face another crisis with their school-age children staying at home.

Education Minister Yoo Eun-hae said in a meeting Wednesday that the government will run 130 learning support centers throughout the country to support the academic efforts of more than 12,700 students found to be behind others.

“I understand that there are many worries and concerns of teachers, students and parents due to the social distancing campaign being hiked to level two,” Yoo said. “The Ministry of Education will work with regional education offices to fill the gaps of safety nets in terms of education.”

Meanwhile, Korean universities one after the other are refunding tuition fees to students after running the entire first semester online and cutting rates for the upcoming semester.

College students have fiercely demanded their tuitions be cut, as they are concerned the rushed online learning curriculum has downgraded the quality of education. A number of students have organized and are pursuing a lawsuit against colleges in request for refunds of their first semester’s tuition.

Dongkuk University announced Wednesday that it will provide a 5 percent discount to students enrolling for the second semester. The university is spending a total of 2.5 billion won ($2.1 million) to provide discounts up to 280,000 won each on tuition.

Hanyang University also announced that it will provide 150,000 won grants for students struggling due to the COVID-19 outbreak. The grant will be available to all students except those receiving full scholarships. Konkuk University, Soongsil University and ChungAng University previously announced they would partially refund tuition fees for the first semester in the form of special grants.