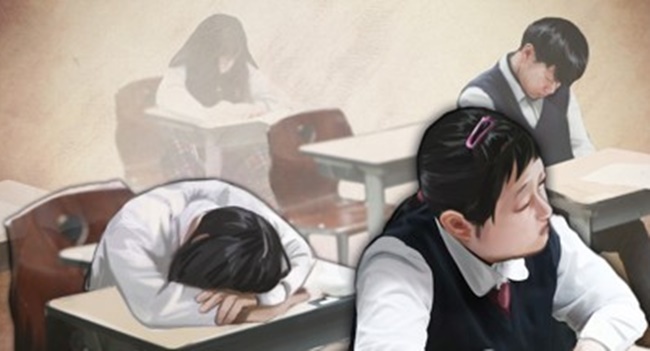 (Yonhap)
The average South Korean youth gets seven hours and 18 minutes of sleep per night, one hour short of the average in developed countries, a survey showed Monday.

More than half of them suffer from sleep deprivation, mostly due to study and internet surfing.

The state-funded National Youth Policy Institute released the results of its survey on health and lifestyle habits of teenagers. It was conducted with 8,201 students and 310 teachers between May and July in 2019.

They compare to 10 to 11 hours recommended in the United States for early adolescents and eight to 10 hours for teenagers, according to the institute.

Korean teenagers get less sleep than the people in the Organization for Economic Cooperation and Development (OECD) countries, who average 8 hours and 22 minutes of sleep, the study said.

The survey found 55.2 percent of the respondents said they experienced sleep deprivation. As the main reason, study was cited by the most (62.9 percent), followed by internet use (49.8 percent), private institutes and tutoring (43.1 percent) and chatting (42.7 percent).

Among other findings, the survey showed South Korean students spend only 2.64 hours on average on sport activities per week.

"Teenagers are not guaranteed their basic rights to exercise, nutrition and rest, which are the basic requirements for health, due to their academically-oriented living environments," the National Youth Policy Institute said. (Yonhap)