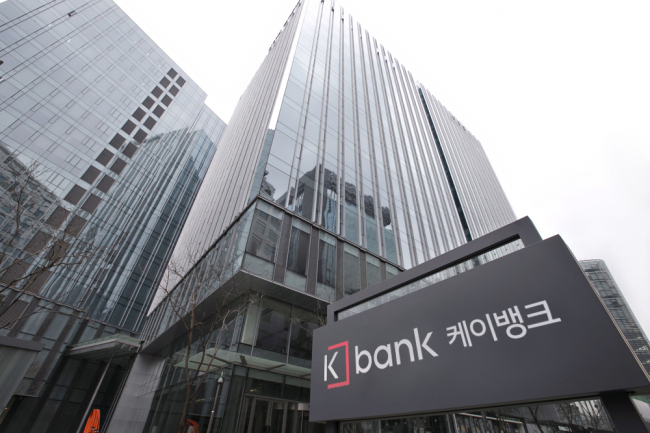 With the Financial Services Commission’s approval, the credit card processing subsidiary of telecom giant KT will become the largest shareholder of the country’s first online-only lender.

Earlier in May, the company had requested the FSC to review its eligibility to become K bank’s largest shareholder.

Initially, KT had sought to increase its stake in the internet lender from the current 10 percent to 34 percent to help the bank expand its capital base.

The move came as a new special act took effect in January last year, which allows nonfinancial institutions like information and communications technology giants to own a maximum 34 percent of shares in online-only banks and operate them.

However, the plan failed as the telecom firm’s application to raise its stake was suspended by the FSC in April due to allegations that it violated the fair trade law.

On behalf of the troubled parent company, KT’s credit card unit has been seeking ways to hike its stake in K bank. It bought a 10 percent stake in the online lender from the telecom firm for 36.3 billion won ($29.8 million) in April to become the second-largest shareholder after Woori Bank, which holds 13.79 percent.

The financial authorities’ stakeholder adequacy review process for BC Card was based on various evaluation criteria, including financial conditions and whether the company has been subject to criminal prosecution.

The FSC also approved Woori Bank’s proposal to possess a maximum 19.9 percent stake in K bank on the same day.

Following the eased rules for stake purchase, BC Card is slated to raise 195 billion won in capital by acquiring some 39 million shares from the online bank on July 28 in order to increase its stake up to 34 percent.

Woori Bank which is currently the largest shareholder decided to purchase K bank shares worth 163.1 billion won after getting approval at a board meeting last week, signaling an implicit agreement over BC Card’s ownership stake, officials said.

Launched in 2017, K bank officially kicked off as the nation’s first internet-only bank, followed by Kakao Bank -- backed by internet giant Kakao. The company allowed Kakao Bank to become the front-runner after it suspended operations from April 2019 due to a liquidity crisis.

Meanwhile, K bank plans to further ramp up its financial services in line with the capital injection. Last week, the online-only lender resumed its personal loan business through its mobile applications 15 months after the suspension of business.