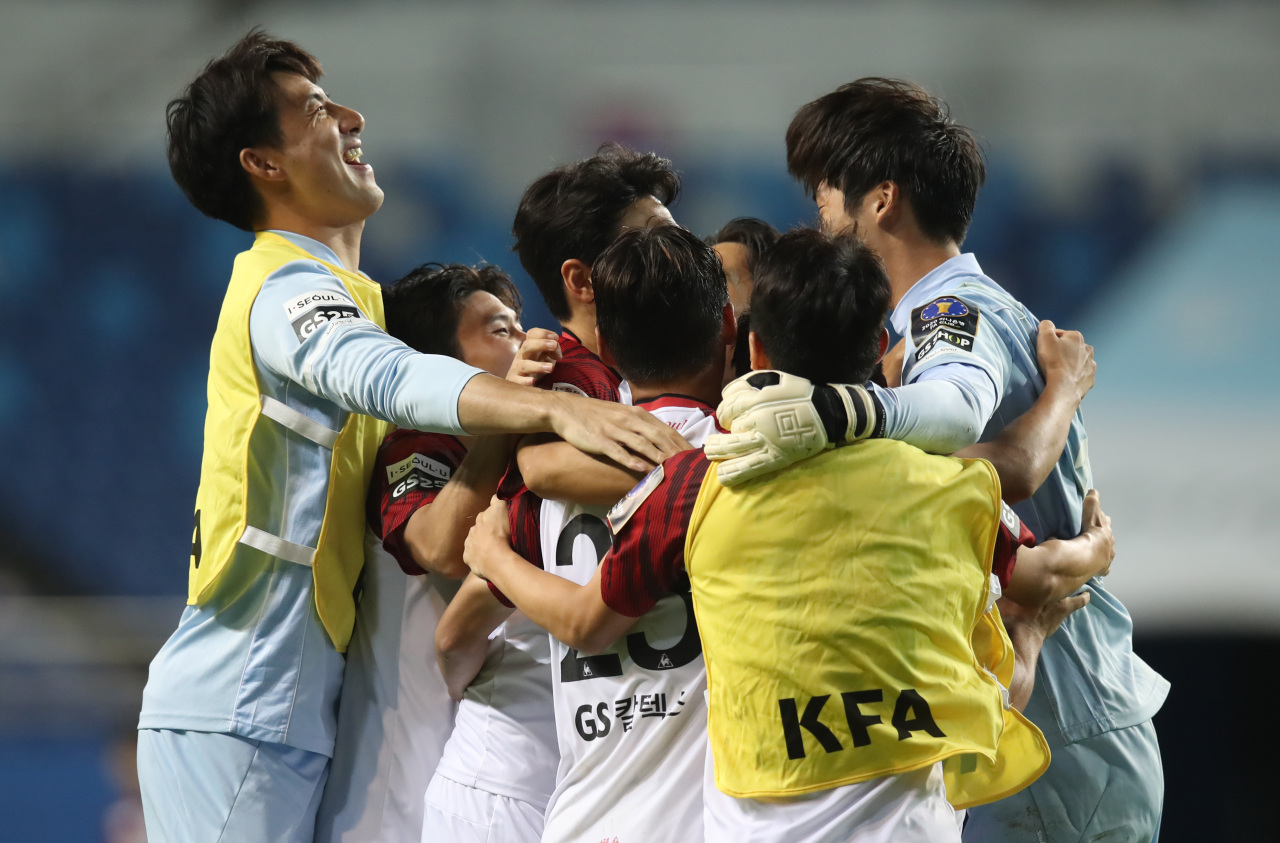 (Yonhap)
When the dust settled following eight knockout matches at the nation's largest football tournament, there were no upsets.

Top-flight clubs that took on lower-tier opponents all advanced to the quarterfinals of the FA Cup on Wednesday night.

FC Seoul of the K League 1 defeated the K League 2 side Daejeon Hana Citizen 4-2 on penalties, with coach Choi Yong-soo prevailing over his predecessor Hwang Sun-hong.

The quarterfinals will take place July 29, and the draw will be next Tuesday.

In Daejeon, 160 kilometers south of Seoul, Choi and Hwang had their first meeting since November 2015. Back in 2016, when Choi left FC Seoul to coach in China, Hwang, who had been Pohang's bench boss, took over in the nation's capital. And when Hwang was sacked during the 2018 season, Choi returned from China for his second tour of duty with FC Seoul.

Bruno Baio gave Daejeon a 1-0 lead with a free kick about five minutes into the match. FC Seoul kept firing shots toward the Daejeon net with nothing to show for them. And it wasn't until about 10 minutes remaining in that match that Park Chu-young, who had earlier missed a penalty, leveled the score with a header.

FC Seoul went down a man soon after Park's goal, as defender Kim Nam-chun was sent off on his second yellow of the match.

The 10-man Seoul held their ground in extra time and prevailed in the shootout after Daejeon's fourth kicker, Hwang Jae-hun, misfired.

FC Seoul, which last won the FA Cup in 2015, reached their first quarterfinals in four years. Daejeon suffered their first home loss of the season.

Ulsan Hyundai, which climbed to the top of the K League 1 table over the weekend, were held scoreless by Gyeongju, and Junior Negrao, the league's leading scorer with 14 goals in 11 matches, came off the bench in the second half to jump-start the offense.

Bjorn Johnsen headed in the first goal in the 75th, and Lee Dong-geong rounded out the scoring during added time.

Daegu are nine points ahead of Seongnam in the K League 1 season, but Seongnam emerged victorious in the FA Cup. Goalkeeper Jeon Jong-hyeok made two saves during the shootout for the nail-biting win. (Yonhap)