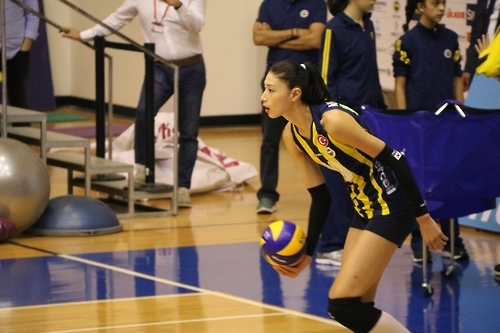 (Yonhap)
South Korean volleyball icon Kim Yeon-koung is considering a return to the domestic league, a source close to the player said Tuesday, amid uncertainty in international markets caused by the new coronavirus pandemic.

The source confirmed an earlier television news report that Kim has left open the possibility of reuniting with the Heungkuk Life Pink Spiders in South Korea's V-League. She made her professional debut with the team in 2005.

An official with the Pink Spiders said he had heard from the Korean Volleyball Federation (KOVO) that Kim may seek a return but added, "The most important thing is what the player herself wants. We'd like to hear from her directly."

Kim, widely regarded as the greatest South Korean female volleyball player ever, spent her first four seasons with the Pink Spiders. Kim then left for Japan to join JT Marvelous on a loan deal, beginning an international career that also took her to Turkey, China and back to Turkey.

Kim wasn't a free agent when she first left the V-League, and the Pink Spiders retained their rights to Kim by placing her on the "voluntarily retired" list.

If Kim were to play in the V-League again, the Pink Spiders must first reinstate her from that list. Then they can either choose to sign her or trade her.

After her stint in Turkey ended, Kim had been linked to China. But Kim may ultimately choose clarity and stability in South Korea during the pandemic.

One pressing issue is the salary cap. For the 2020-2021 season, the cap for the women's V-League teams has been set at 2.3 billion won ($1.8 million). The Pink Spiders have already spent 1 billion won on re-signing outside hitter Lee Jae-yeong and then acquiring her twin sister Lee Da-yeong via free agency.

While Kim's exact salary figure hasn't been made public, she has reportedly been one of the highest-paid female volleyball players in the world.

Kim has won numerous championships and individual awards in a 15-year career. She was named the MVP of the women's volleyball tournament at the 2012 London Olympics, where South Korea finished in fourth place. (Yonhap)