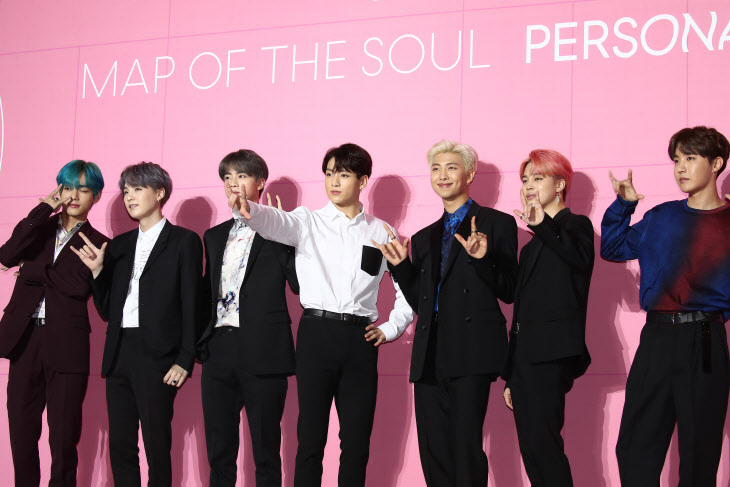 BTS during the press conference for their sixth EP “Map of the Soul: Persona” in Seoul in April 2019. (Big Hit Entertainment)
Overseas sales of BTS’ 2019 record “Map of the Soul: Persona” are believed to have been massively underreported to the International Federation of the Phonographic Industry for its prestigious annual global top albums chart.

Earlier this year, the septet’s sixth EP was named the third bestselling record of the year in 2019 with 2.5 million unit sales by the London-based IFPI’s Global Top Album Chart.

But what would have been a celebratory occasion was soon met with speculation after fans noticed an immense sales gap of 1.2 million copies with South Korea’s leading chart Gaon Chart, according to which the same record sold 3.7 million copies.

In the wake of the news, one fan on Twitter put it bluntly, “Explain to us how you did the math exactly.”

Confusion led to a few scenarios including one in which “Map of the Soul: Persona” was considered an EP and its sales might have been slashed by half, which the IFPI says is not true.

“Only album downloads and physical album sales were used in the bestselling albums chart,” said Linzi Goldthorpe, senior communications executive at the IFPI, in an emailed statement.

“For the purposes of the chart, albums are defined as being five tracks long or 25 minutes in running time.”

She added the rankings are “based on self-certified submissions” from their member record labels. For BTS, the sales figures were submitted by Big Hit Entertainment.

And asked about the huge discrepancy, Big Hit confirmed that data from Hanteo Chart, which is based on the sales volume in South Korea, was submitted to the IFPI, leaving a large number of overseas sales of the EP uncounted.

“IFPI asked us for sales data and we submitted that of Hanteo Chart, which is based on the album sales at home,” a Big Hit public relations official told The Korea Herald.

Hanteo Chart basically tracks down sales of music albums licensed in Korea, including some overseas sales through individual importers. In the meantime, Gaon Chart collects data from all official distributors around the world. BTS, for instance, has two distributors for their records, the Dreamers Company at home and The Orchard abroad, respectively, both of whom submit data to Gaon.

The Big Hit official declined to further elaborate on why they didn’t submit Gaon data instead of that of Hanteo.

“We understand that the partnership between local distributors and the IFPI was not renewed this year, which meant that the IFPI had to contact each record label directly including Big Hit,” an official at the Korea Music Content Association, a group behind Gaon Chart, said on condition of anonymity, citing the sensitivity of the issue.

He added Big Hit’s decision to submit Hanteo’s data was a curious one.

“We asked Big Hit why they’d submitted data from Hanteo, instead of directly asking data from distributors. The agency just repeated that they were asked by the IFPI to provide sales data,” he said.
“But Hanteo cannot count the volume of export sales and through which company and in which country.”

The IFPI rankings and sales data are widely quoted to gauge the artists’ achievements of the year. Industry people around the world purchase the annual full report despite a hefty price tag of 5,000 pounds ($6,125).