The newest boy band from BTS’ agency Big Hit Entertainment, TXT unveiled the new song during its online media showcase that was livestreamed on YouTube on Monday.

“Can’t You See Me?” fronts the group’s “The Dream Chapter: Eternity” EP, which is the third part of its “Dream Chapter” series that began from its debut. Flourishing on thumping pop synth, the song relays the confusing feeling of bandmates whose friendship enters a conflicting phase. 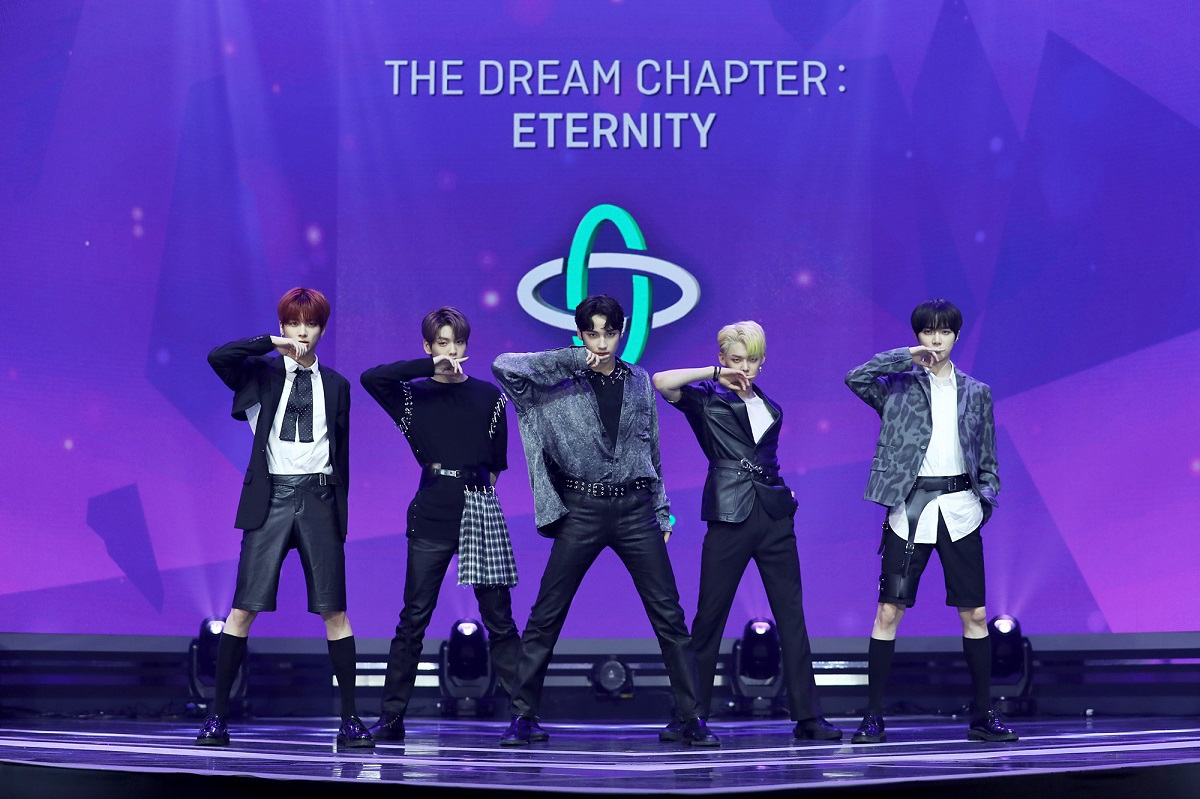 TXT poses at its online media showcase for the new album in Seoul on Monday. (Big Hit Entertainment)
“If our previous ‘Star’ and ‘Magic’ albums talked about the budding friendship and making memories together, ‘Eternity’ is about facing troubles in relationships. We resent each other, but at the same time, we hope our friends will save us,” explained Yeonjun of the new EP and single during the event. “So it will have a bit dark and gloomy sound. The dance choreography for the new song also depicts a broken friendship, the emotion after fighting with each other,” he added.

The song’s accompanying music video also precisely captures the emotional rollercoaster of the singers, as they start off by spending peaceful time together in a house. But as the confliction begins, the mood changes eerily, with the bandmates smashing red-colored fruits they’ve been eating such as strawberries and tomatoes and throwing them against white walls. The act also fiercely dances at the backdrop of a blazing house, a metaphor for the ailing friendship.

“When filming the song’s trailer, I recalled the memory of how I felt lonely when I had to go to a different high school from my peers. I was talking about it with Bang Si-hyuk producer one day, and he advised me to channel that feeling into the shooting: shared Yeonjun. 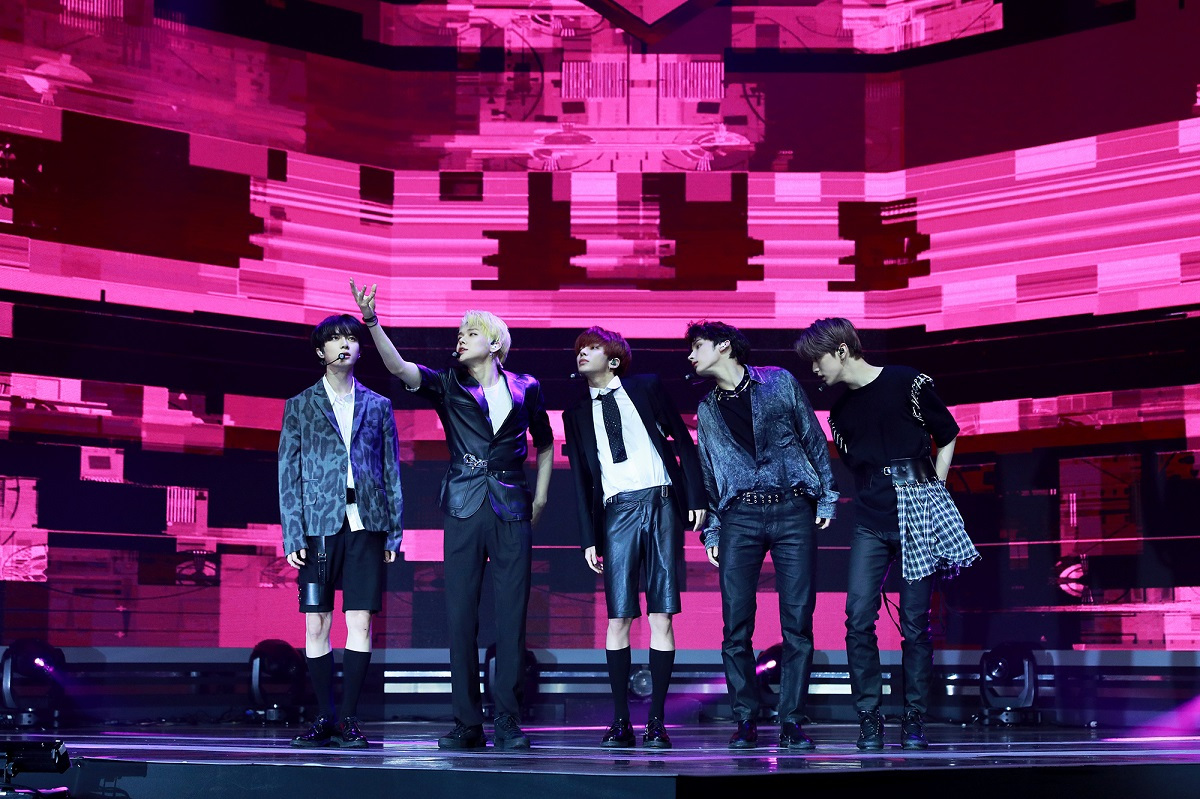 (Big Hit Entertainment)
But the group said the album ends on a rather positive note, as the TXT members embrace dark sides of their friendship and decide to cherish their memories.

The “Eternity” album also shows more fingerprints of the bandmates, as some of its tracks reflect their own experiences. “Maze in the Mirror,” which credits all five members as lyricists and Beomgyu as a producer, looks back on the signers’ trainee days, while Yeonjun wrote the rap part of “Fairy of Shampoo,” a remake of Light & Salt’s 1990 hit.

“I made ‘Maze in the Mirror’ when I first learned composing. I also titled the song myself. As a trainee, I especially had a hard time with monthly evaluations and I felt a lot of pressure as I was the last member to join the group,” said Beomgyu of his creative process.

“As I looked at myself in the mirror during the dance practice, I didn’t feel like myself, more like a stranger. It was as if I was lost in a maze I couldn’t escape from. After Bang listened to it, he decided to put it in the album. It feels amazing that my past work came to light and got to promote with my bandmates.”

Yeonjun also chimed in and said, “We were always afraid of our uncertain future as trainees. The song truly tells our own stories. I burst into tears while listening to it.”

The self-reflective theme of the album also runs through other tracks like “Drama” and “Puma.” 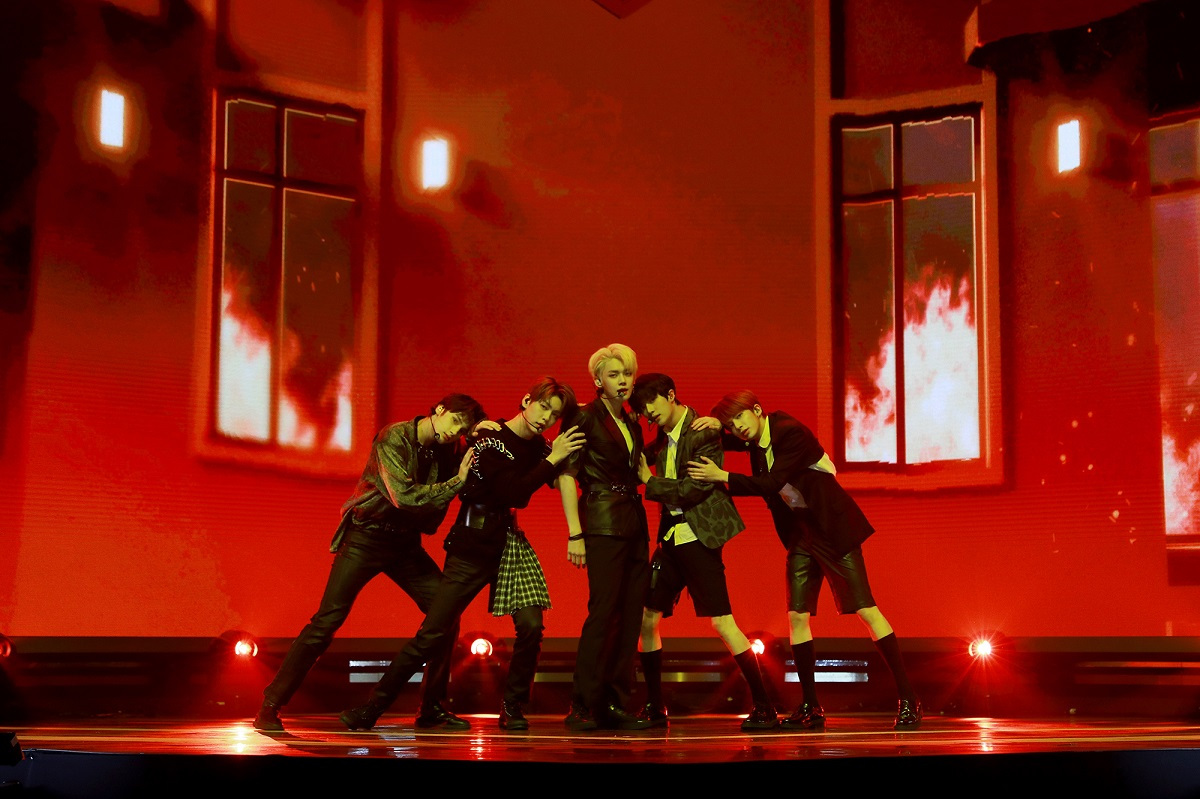 (Big Hit Entertainment)
Having debuted with “Crown” in May last year, TXT successfully cemented itself as a rising rookie with its fantasy-like narratives and iconic choreography that are in sync with what Big Hit is known for. The act also scooped a bagful of awards at several music award shows last year, proving its skyrocketing global fame. It released its first studio album “The Dream Chapter: Magic” featuring single “Run Away” in October last year.

Asked about how they’ve grown up as artists since their debut, Huening Kai said, “First of all, I got 20 centimeters taller (laugh). In the past, all we wanted was to debut. But after we did it, we felt confused at the same time, but also got more responsible and serious about our career.”

Soobin also said that they received words of wisdom from producer Bang and the group’s senior label mate BTS.

“Bang complemented us on how well we’ve digested various concepts in our past albums and advised us to highlight individual members’ charms in the new album. J-Hope of BTS also told us not to get daunted in any situation and always show our full-selves,” he said.

The group went onto share that its underlying value would always be offering comfort to people through music and its next goal is to hold a solo concert.

Before wrapping up the showcase Yeonjun made a surprise announcement that fans will be gifted with the group’s another self-made song in the near future.

“The song is going to tell our own stories. It will be unveiled through a platform that is not an album,” said Yeonjun.