[ The Korea Herald – Send E-mail ]
[Herald Interview] ‘Never too early to start preparing for next epidemic’
Seasoned health official says Korea will rise from coronavirus outbreak stronger, better prepared for next one
By Kim Arin
Published : May 17, 2020 - 19:03
Updated : Jun 16, 2020 - 23:17 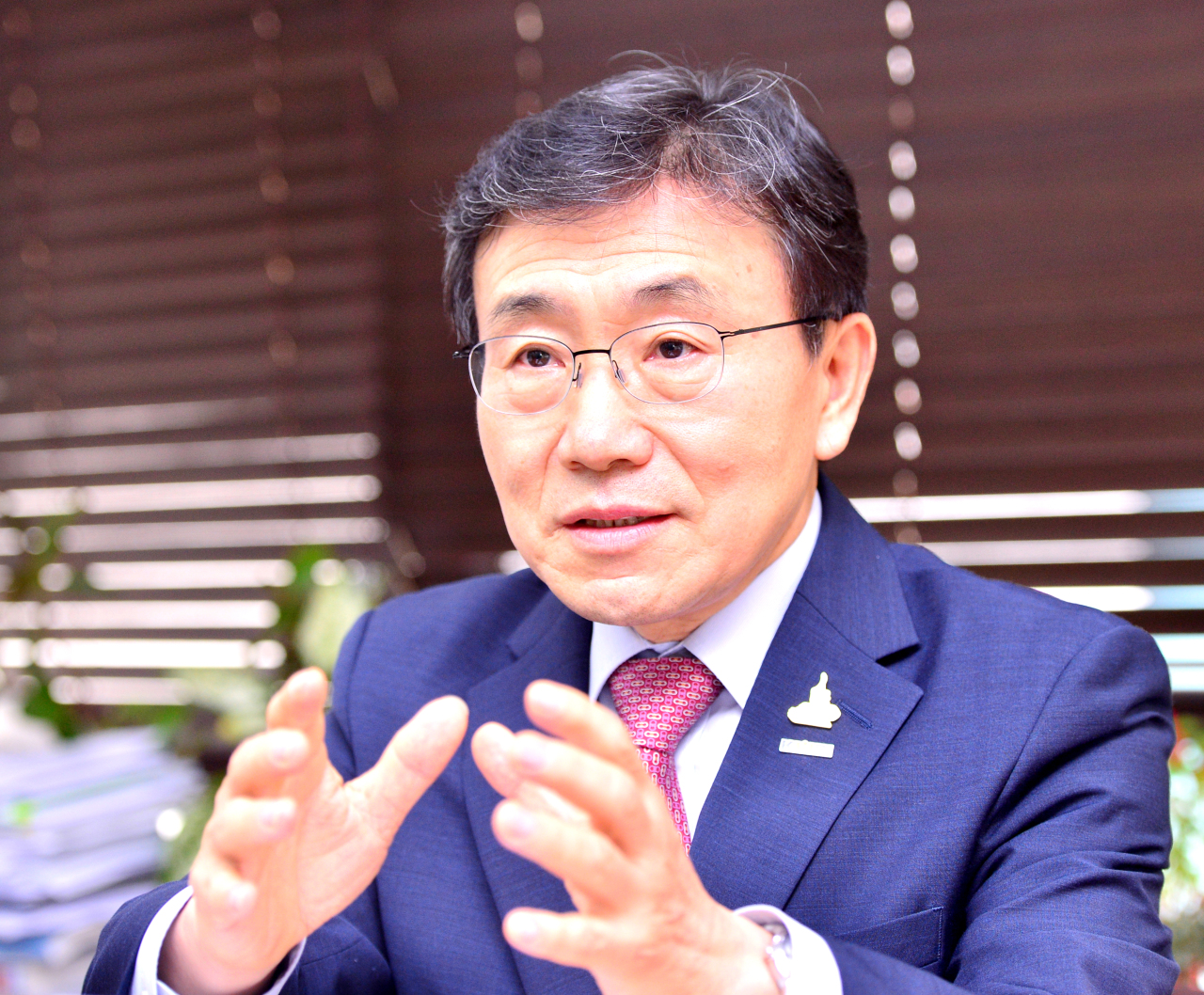 Kwon Deok-cheol, president of the Korea Health Industry Development Institute, speaks to The Korea Herald at his Seoul office on Wednesday. (Park Hyun-koo/The Korea Herald)
A seasoned health official who was a key player in South Korea’s response to Middle East respiratory syndrome in 2015 said the novel coronavirus crisis could prove to be an opportunity for the health sector to boost its epidemic preparedness, as did earlier disease outbreaks that struck the country.

Kwon Deok-cheol, a former vice health minister and the president of the ministry-affiliated Korea Health Industry Development Institute, told The Korea Herald at his office in Seoul on Wednesday, “Korea will emerge from the pandemic in better shape to fight the next health emergency -- should it come its way.”

When MERS hit Korea five summers ago, Kwon -- as a top administrator within the central response operations headquarters -- played an instrumental role, briefing the press on the local virus situation almost daily. He also orchestrated the government efforts to draw up a white paper on the national health crisis after it was officially declared over.

“MERS completely rewrote Korea’s epidemic playbook,” he said. “The Korea Centers for Disease Control and Prevention went through a major makeover, for one thing, with its director bumped to a vice minister-level post.”

Kwon said the KCDC’s Emergency Operations Center, which runs round the clock to monitor and respond to public health threats including the new virus as well as endemic diseases, is among the post-MERS establishments.

“Fighting through MERS is how we realized we lacked negative pressure rooms and critical care facilities such as ventilators, and the systems to detect the patients and trace their contacts,” he said.

“Korea is a leading manufacturer of some essential medical supplies such as face masks, but it relies entirely on foreign imports for the raw materials to produce them. Such dependency can incur heavy costs in a pandemic,” he said, stressing that one of his main goals as chief of the institute was to increase domestic production of medical goods.

Under Kwon’s leadership, the institute has coordinated a series of online events to share coronavirus information with its overseas counterparts.

“The first webinar we held was with Tuinisian authorities, where experts from Seoul National University Hospital spoke about their experience with the virus patients. Since then, we have received requests for similar international cooperation and hope to convene more where possible.”

One such platform for global collaboration is the coronavirus-themed Bio Korea convention slated for May 18-23, which will be delivered entirely online.

Kwon said he hoped the weeklong event would provide a chance for biotechnology firms and researchers to exchange ideas and complement areas where capacity falls short.

“Korea makes high-quality test kits and medical appliances, for instance, but lags in vaccine development. Partnership is how we can achieve the balance.”

Korea had been relatively less committed to investing in vaccines, which take a long time until it is capable of turning a profit, he said, adding, the coronavirus is believed to bring about a shift in paradigm.

“I believe the pandemic has raised enough of a society-wide consensus for the value of supporting and making investments in vaccine developments.”

Kwon was appointed vice health minister in June 2017 and served in the post for around two years before being succeeded by Kim Gang-lip in May 2019. He was named head of the institute in September last year.