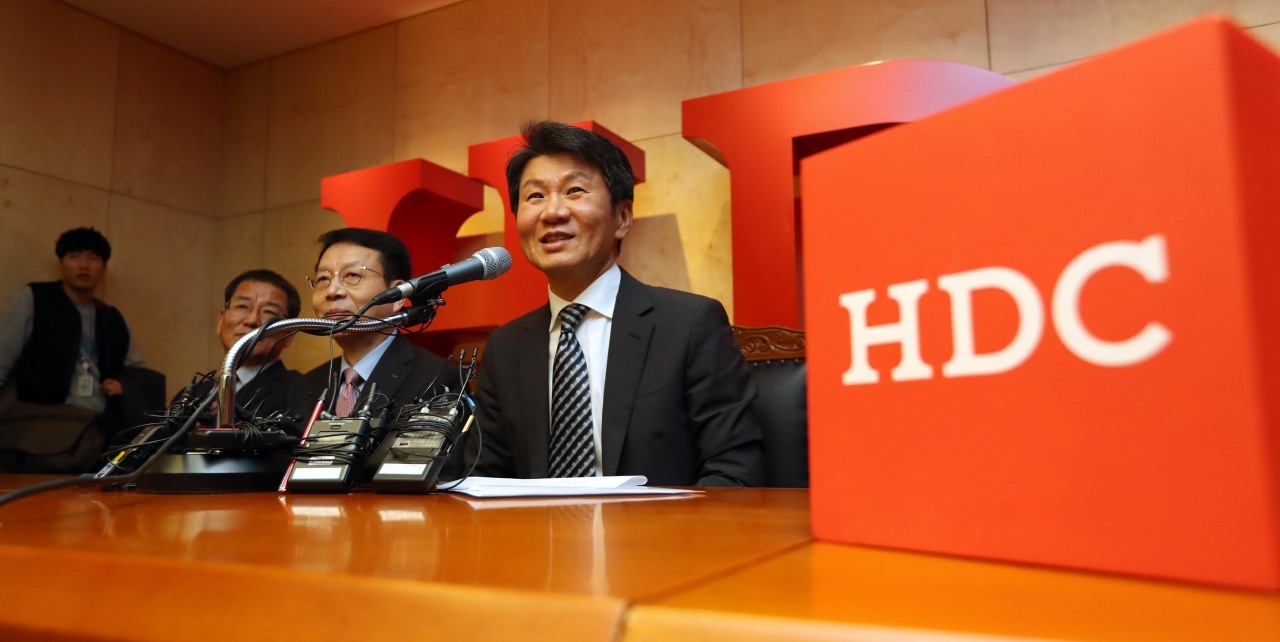 HDC Group Chairman Chung Mong-gyu (right) attends a press conference on Asiana Airlines’ acquisition at the company’s headquarters in Yongsan, Seoul, in November. (Yonhap)
Midsized construction company HDC Hyundai Development Company said Wednesday that it has postponed the schedule to complete the acquisition of Asiana Airlines, as more time is needed for the conditions precedent to be met, including a delayed foreign regulator’s approval.

HDC said in a regulatory filing that the acquisition date has been resettled from April 30 to “a date agreed by both parties.”

A HDC official told The Korea Herald that the deal closing date can be after May, considering the approvals that HDC needs to obtain.

Based on the two deals clinched in December -- one involving acquisition of Kumho Industrial’s 30.77 percent, or 68.6 million, of “old shares” in Asiana at 322.8 billion won ($265 million), and the other contract involving purchasing Asiana’ new shares at 2.17 trillion won –- HDC has to receive approval on the merger plan from six nations that Asiana flies to.

Barring Russia, the five other countries of the US, China, Uzbekistan, Turkey and Kazakhstan have granted their approval.

In November, the HDC-Mirae Asset consortium was picked as the preferred bidder to acquire a controlling 31 percent stake in the country’s second-largest air carrier.

But after the outbreak of the novel coronavirus that is believed to have originated in Wuhan, China in January, Asiana Airlines has reduced 79 percent of its China routes and suspended most of its international routes.

This has deteriorated the air carrier’s fiscal health, raising concerns that HDC may retreat on its plan to acquire the company for 2.2 trillion won.

Despite speculations, HDC has been reiterating its plan to complete the deal by the end of April.

Last month, Jeju Air clinched a deal to buy 51.17 percent of Eastar Jet for 54.4 billion won as part of its business expansion plan.

According to the company, the Jeju Air-Eastar Jet merger plan is still under review by Vietnam and Thailand.

As soon as the company receives approvals, it will complete the takeover process with capital support of 170 billion won from the Korea Development Bank and the Korea Export-Import Bank of Korea, Jeju Air said.

Following the Korean government’s takeover approval earlier this month, Jeju Air has already paid 11.95 billion won to Eastar Jet. The remainder will be paid by June 30, according to the company.