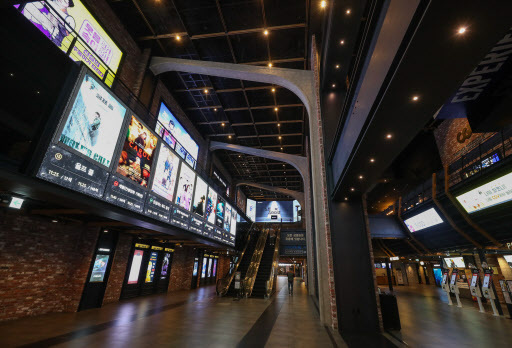 An empty movie theater at CGV Yongsan in Seoul (Yonhap)

Deputy Prime Minister and Finance Minister Hong Nam-ki on Wednesday announced that the government would exempt cinemas from paying into the movie development fund to help theaters weather the impact of COVID-19.

The exemption will apply retroactively from February. The government expects the total amount that will be exempted to reach 54 billion won ($44.28 million), the average amount collected annually as movie development fund since 2016.

Under the law, movie theaters are required to contribute 3 percent of ticket sales to the Korean Film Council to support local movie development. Independent movie theaters and theaters with less than 1 billion won in annual sales are not required to pay toward the fund.

The government initially considered providing a grace period for delayed payment into the movie development fund, but considering the seriousness of the current situation, decided on the payment exemption.

According to the Korean Film Council, the number of Korean moviegoers dropped to 1.83 million people in March. This is the lowest number for the month since the KOFIC started to compile box-office data in 2004. The total revenue of movie theaters stood at 15.15 billion won in March, plunging from 126.56 billion won a year earlier.

In addition to assisting movie theaters, the government also laid out several plans to support people working in the movie industry. It will provide part of the marketing costs for 20 selected movies that were set to be released during the first quarter this year but decided to delay or cancel its schedule due to the novel coronavirus spread.

The government will also provide money to resume production of 20 selected movies that have suspended production. It also plans to provide vocational training for 400 people in the film industry who lost their jobs or cannot find freelancing jobs due to the spread of the respiratory illness.