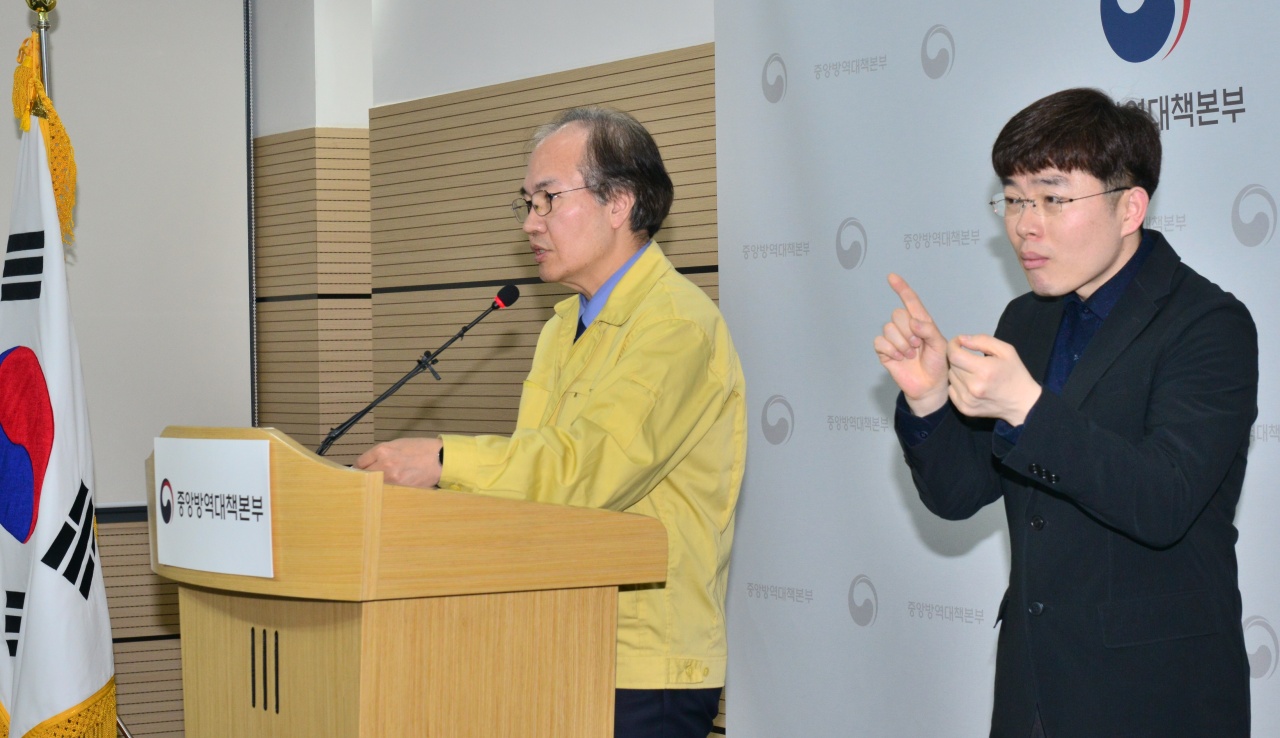 Korea Centers for Disease Control and Prevention`s Vice Director Kwon Jun-wook speaks during a press conference on Tuesday. (KCDC)
South Korea is lauded for its open-border policy in its virus response. But now that the outbreak has reached a pandemic scale, calls are growing for tighter border controls.

In a phone interview with The Korea Herald, former director of Korea Centers for Disease Control and Prevention Jung Ki-suck stressed that government measures to contain imported infections are just as crucial as social distancing by locals.

“Social distancing is about eschewing nonessential travels, within the country as well as between borders,” said Jung, who was the centers’ director in 2016-2017.

“It’s not too late to seal off the borders, if we were really trying everything at our disposal to control the spread.”

Another former director of KCDC, Jun Byung-yool, who headed the agency between 2011 and 2013, said the border delays will come at a steep price.

“The government made the wrong choice not to close borders on China, and it is sticking with the mistake,” he said. “And consequences of that error would be all of the society’s to bear.”

Testing upon arrival still runs the risk of allowing infected people through.

“If you test negative, that means you are negative that day. It doesn’t mean you are cleared of the virus,” said Jun.

Commenting on what the two former KCDC heads have said about borders, infectious disease specialist Dr. Kim Tae-hyong of Soonchunhyang University Hospital said, “Reducing the number of incoming cases would of course help.

“But until when and how far the scope should extend are also important aspects in the discussion.”

Preventive medicine professor Dr. Choi Jae-wook of Korea University Hospital said while KCDC was right to prioritize stemming community transmission, that did not mean screening out potential cases from abroad would be ineffective.

KCDC said Tuesday infections coming in from overseas accounted for about one in four new cases.

The battle against the virus will be long, experts say, and pacing through “flattening the curve” is key.

Oh Myoung-don, who is helming the National Medical Center’s clinical committee for emerging infectious diseases, told reporters on Monday that COVID-19 was “not going away” in the way that Middle East respiratory syndrome did in 2015.

“What we are aiming for at this point is to limit the occurrence of new cases so as not to overburden the health systems until vaccines and treatments are ready,” he said.

Although the daily tally of new cases has fallen to two digits in the past two days, an increasing number of patients are falling critically ill.

Eighty-seven patients with COVID-19 are in “severe or critical” condition, health authorities said Tuesday, 62 of whom are unable to breathe without intervention.

According to March 11 data, 87 percent of negative pressure rooms in the country were fully occupied. Intensive care equipment such as ventilators and ECMO machines are also feared to run short.

Another vital question is how to maintain free movement across borders without exhausting resources that go into it to keep the system afloat -- which include human labor.

“The office is already overwhelmed and over capacity by a long way,” she said. “There are too many arriving with symptoms. Last week, about a third of those coming in from Europe were symptomatic.”

Since Sunday, all passengers from Europe are tested for the virus and quarantined for two weeks.

Checking on quarantined individuals twice a day to see if they are following through with the order, and running errands such as dropping off groceries for them, are also the local government officials’ job.

In Seoul alone, 5,765 had been subject to the 14-day quarantine, with 2,229 more still under it. A city health official says the virus has had him and his colleagues working “weekdays and weekends alike with few days off.”

The mounting workload has led to an official on COVID-19 duty dying last month in Jeonju at 42. The city office said he was working overtime until 11 p.m. the day before he died.

But border closures are not something Korea is considering, now or in the future.

“Countries around the world are shutting their doors over virus fears. Once international exchanges are cut off, the economic shocks could end up more severe and longer lasting,” he said.

While Korea is heavily reliant on trade, it had enough bargaining power to turn things around in the event of a retaliation against virus border closure, said economics professor Ahn Dong-hyun of Seoul National University.

Ahn said one chief reason Seoul was unable to reciprocate Beijing’s entry restrictions on travelers from Korea was its export volume to China.

“In the past three years, Korean exports to China climbed markedly, while those to the US dropped. Such high dependence on a single export market carries big risks,” he said. “This is clearly something that needs adjustment, if it is thwarting the country from taking necessary safety steps.”

On the country’s policy for fully covering testing, treating and living expenses for foreign patients, Ahn said it seemed an “immoderate spending of taxpayer money” that could lead to instances of “moral hazard.”

“Suspected patients abroad that are unable to get tested or treated where they are can come to Korea. It will cost them nothing,” he said.

A Foreign Ministry official told The Korea Herald on Tuesday that the government would review revising the “zero cost” policy for patients of foreign nationality depending on the circumstances.

Foreign policy experts worry that a border shutdown would send the wrong message to rest of the world.

Kim Ki-jung, who was foreign policy adviser to the Moon campaign, said Korea’s approach to virus control has been “testing, isolating and treating without forgoing foreign ties.”

“Closing borders now will go against our initial principle,” he said.

Yang Seung-ham, a diplomatic studies professor at Seoul’s Yonsei University, said denying foreign entry was “not a matter of reciprocity.”

“The pandemic will not discontinue from barring travels,” he said. As of Monday, 179 states have either banned or restricted the entry of passengers from Korea.

Addressing the economic and diplomatic concerns, an infectious disease epidemiology expert spoke to The Korea Herald on the condition of anonymity, saying, “In an unprecedented global health crisis, we should be listening to science, not politics.

“The greatest threat about the coronavirus is the uncertainties that surround it. One thing we do know is that it is very, highly contagious. You want to eliminate the risk factors as much as possible -- this is not the right time for taking chances.”