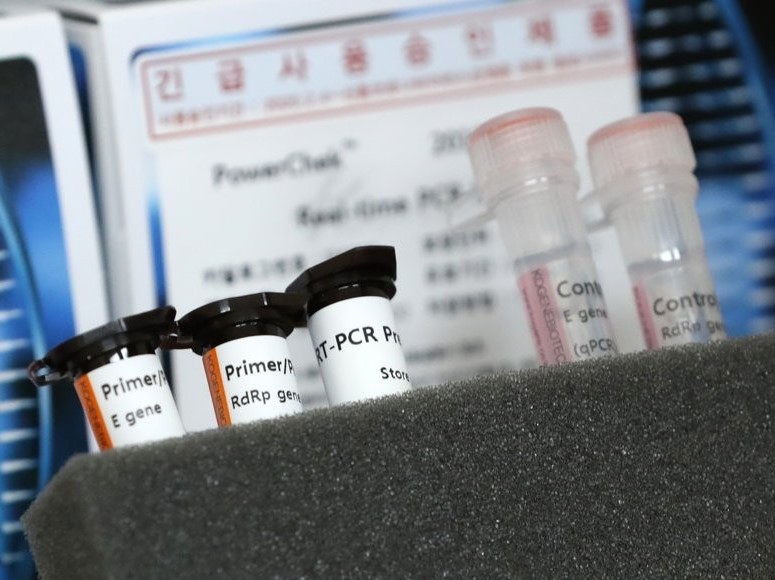 Seegene, Kogene Biotech, Solgent, SD Biosensor and other companies have all received permission from the Ministry of Food and Drug Safety (MFDS) to sell their products in South Korea, as well as in overseas markets.

The products that have received permission mostly use real-time polymerase chain reaction (RT-PCR) testing that has been widely used to detect COVID-19 infections, with the kits rated as being highly reliable and accurate.

In South Korea, the kits have been used to check 286,716 people since Jan. 3, with usage jumping since February after local health authorities granted emergency authorization for the diagnostic tools.

Results from the virus tests here can come out in six hours, which is much shorter than 12 hours or more, which was the norm in the past.

Exports of such test kits have already been in progress with talks over new deals under way. In addition to permission here, the bio tech companies have to get approval from foreign regulators for sales.

Seegene, which ships some 80 percent of its products, confirmed it has sent its Allplex assay kits to some 30 countries, with Kogene Biotech saying it has been selling its PowerChek kits to Middle Eastern and European countries.

SolGent Co. that makes the DiaPlexQ, has secured the CE certification for the European market, and had been sending its product to 33 countries as of last week. It added talks are also under way with others that have shown interest in the kit.

In addition to the three firms, SD Biosensor said besides the RT-PCR Standard MnCOV kit used in the country, it recently got permission for its Standard Q COVID kit that checks for antibodies in the body to screen for infection.

LabGenomics, PCL Inc. and some other countries that got approval recently said they too are moving to export their kits. (Yonhap)